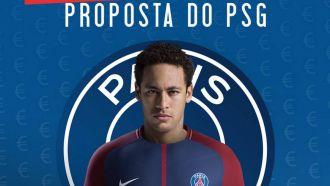 Several reports surfaced on Monday which linked Neymar with a possible move to Paris Saint-Germain, but one Brazilian outlet has gone a step further and has reported that a deal is already done.

The current Barcelona player is said to have accepted a proposal from the French capital to move away from the Camp Nou, with the Ligue 1 side ready to pay his release clause of 222 million euros.

The report comes from Brazilian channel Esporte Interativo and they even designed a mock-up graphic of how the 25-year-old would look in the French side's colours.

Álvaro Morata on verge of signing for AC Milan - Gazzetta

The Real Madrid striker had previously declared that he could not play for any Italian side other than Juventus but signs are that his stance on this has softened.

In Italy they have no doubts: Real Madrid's Álvaro Morata will be the next purchase of the now Chinese-funded AC Milan. Club director, Marco Fassone has admitted to Mediaset Premium, their interest in the Real Madrid striker, and stated that the negotiations have heated up significantly in the last few hours.

Madrid will listen to Milan offer

'La Gazzetta dello Sport' goes further in their reporting and says that the Spanish forward is just "a step" away from joining the Milanese club. Madrid would be willing to listen to an offer from the Rossoneri of 70 million euros (this would come with a contract of around 10 million euros) in an attempt to please the youngster who is now looking for a change of scenary, depsite only returning to the Spanish capital last summer. After impressing in many a cameo role for the Liga and Champìons League winners, he is hoping to find guaranteed first team action, something not likely to be given in Madrid.

Another player that Milan were closely linked to is Pierre-Emerick Aubameyang and the striker's club, Borussia Dortmund, have told him to get any move sorted this week. Would Milan take both strikers or is it a choice between the two?

Following the Champions League final in Cardiff, Morata had declared that he would be unable to go to another Italian side as he felt too attached to Juve following his time there. It seems though that the new Milan project - which has already surpassed 200 million euros spent in the transfer market - has changed his mind.

Sergio Ramos has joined his Real Madrid teammates for what will be his 13th season in the all white, and in which he will be looking for even more silverware, including the club's 13th Champions League trophy. This season, like every other, will present new challenges and obstacles and as such, Ramos will set himself new goals for the coming campaign.

The fight for the Ballon d'Or

Ramos previously said in an interview with MARCA that he does not think the idea of him winning the Ballon d'Or is crazy and he wants to follow in the footsteps of Fabio Cannavaro - the last defender to be crowned the world's best player.

The top of the Champions League

Having already won three Champions Leagues, Ramos will want to put himself into the top group of players who have four to their name. Since the tournament rebranded as the Champions League, Lionel Messi, Clarence Seedorf, Gerard Pique, Xavi, Samuel Eto'o, Andres Iniesta and Cristiano Ronaldo have all won it four times, an illustrious club that the defender is keen to break into.

Closing in on total campaigns

Ramos has his eye on equaling Fernando Hierro and Guti's remarkable 14 seasons at the club, and possibly even Raul's 16 campaigns at the Estadio Santiago Bernabeu. His dream is to retire at Real and at 31 he still has some years ahead of him.

The dream of six trophies

It will not be easy, but with his strength, attitude and leadership, Ramos will be one of the main players as Los Blancos look to win every trophy on offer this season, making history as club captain.

The challenge of the World Cup

It is a World Cup year and Ramos knows he has another chance to make history with Spain, having won the trophy already under Vicente del Bosque. He will be looking to repeat the triumph as captain under Julen Lopetegui.

Chelsea manager Antonio Conte has signed a new two-year contract with the Premier League champions, saying they must work even harder this season to remain the top club in the country.

The deal does not extend the Italian's commitment to the club because he signed a three-year deal when he joined in 2016, but British media reported he has been given improved terms.

"I am very happy to have signed a new contract with Chelsea. We worked extremely hard in our first year to achieve something amazing, which I am very proud of. Now we must work even harder to stay at the top," 47-year-old Italian Conte said.

Conte, who managed Italy at Euro 2016, led Chelsea to the league title at his first attempt last term and they reached the FA Cup final which they lost to London rivals Arsenal.

The new contract will come as a relief to Chelsea fans after Conte was reported to be frustrated by the club missing out on Belgium forward Romelu Lukaku, who was signed by Manchester United last week for 75 million pounds ($97.82 million).

"This new contract reflects our belief that he can continue to deliver results both domestically and as we return to European competition in the Champions League."

Chelsea have signed defender Antonio Rudiger from AS Roma and midfielder Tiemoue Bakayoko from Monaco but need a striker with Spain's Diego Costa expected to leave the club having not travelled on their pre-season tour to China and Singapore.

They have been linked with Borussia Dortmund's Pierre-Emerick Aubameyang but the Bundesliga club said on Tuesday that the 28-year-old Gabon forward would not be leaving.

The rumours over whether or not Cristiano Ronaldo and Georgina Rodriguez are expecting a child have been confirmed by the player.

Ronaldo, who just became a father to twins Eva and Mateo and who also has a seven-year-old son Cristiano Jr., will now become a father once again.

"I am happy about what is coming," he said in an interview with El Mundo's LOC magazine, confirming the pregnancy.

The fact that Rodriguez has started following a wedding dresses Instagram account has also led to speculation that the couple could be set to marry, as well as become parents together.

You cannot become a legend in another man's shadow, so the logic goes. For Neymar, being in Lionel Messi's shadow has become a constant obstacle so great that it may finally be about to force him out of Barcelona.

Talk from Catalan newspaper Sport that he's once again mulling over a Barcelona exit has been substantiated by MARCA's awareness of Paris Saint-Germain lurking around the corner for the Brazilian, even willing to pay his 222 million euro release clause.

This is no rare occurrence for Neymar. Speculation first arrived in 2015 when, after two seasons in Catalonia, he returned to Brazil for the winter break and informed journalists that he didn't know if he'd stay at the Blaugrana because 'life is very long'.

Just a month earlier, his father and agent had opened the door to a new challenge: "If we don't have a comfortable situation to work in, we cannot stay in Spain."

At that moment, Real Madrid seriously considered pledging the 190m euros to pluck the forward from their biggest rivals, but early talks with Neymar Snr. were not successful.

That situation progressed until the summer of 2016, with Barcelona in genuine fear of losing one of their star attackers with his former representative Wagner Ribeiro stating at the time how three clubs were ready and able to buy Neymar.

However, he stayed, with more than a glance towards elsewhere. Eventually, the 25-year-old confessed to 'talking to a lot of teams' before committing to the Azulgrana.

"We were talking for two hours and Neymar was excited," explains Ribeiro. "[PSG chairman] Nasser El-Khelaifi said there wouldn't be any tax problems and that he'd be the No. 1 in the team. Which is a situation he doesn't currently enjoy at Barcelona."

After weighing up the move, Neymar decided to stay put.

Quickly enough, Barcelona pounced on this period of certainty and tied the player down to a new contract. It seemed to, at least, guarantee a year or so without transfer speculation.

However by December, Neymar had thrown that into doubt. Talking up his desire to one day play for Brazilian club Flamengo, he went on to say: "Anything can happen, who knows."

Fast forward to this spring and Neymar Snr. was again in contact with potential suitors. Offering the striker to several Premier League teams, none had the financial commitment that PSG were prepared to put forward.

And here we are, the winger yet again linked with Les Parisiens as he continues his quest to be the top dog, the hero, the No. 1 at one of the biggest clubs in Europe.

In fact, they're also a club that have been trailing him for some time, as back in 2012, the then Santos youngster was asked about whether he'd one day turn out for PSG.

"It would be an honour to play there," he replied.