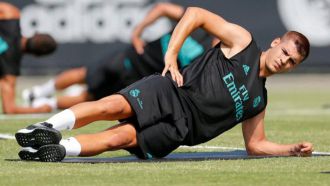 Morata is the Mbappe that Zidane can call upon

The future of Alvaro Morata is in white, unlike that of Kylian Mbappe, who looks destined to remain at Monaco for at least one more year, despite Real Madrid's best efforts.

Morata, despite wanting to leave, has always been aware that nowhere he could go would be as illustrious as Real Madrid, but the Spaniard was desperately seeking more regular first-team football for next season.

Zinedine Zidane, however, was always reluctant to let him go and he made his feelings clear to both the player himself and to club president Florentino Perez, so it was decided that unless an offer of 90 million euros was received, he would not leave.

From the outset Manchester United were favourites to sign Morata, but the strained relationship between the two clubs made a deal difficult to reach, before the Old Trafford side eventually opted for Romelu Lukaku instead.

Next in line appeared to be Chelsea, with Antonio Conte a huge admirer of Morata's, but the Londoners have now turned their attentions to Borussia Dortmund's Pierre-Emerick Aubameyang.

Morata's options, as such, are almost non-existent now and Zidane appears to have gotten exactly what he wanted all along.

As much as Morata is frustrated that he could not get his move, his attitude is, as ever, positive and he is determined to prove his worth to Real Madrid and to Spain ahead of next summer's World Cup in Russia.

The situation now in Madrid is the one that their coach wanted from the very beginning - to keep hold of the squad that won him the Champions League.

Spanish Super Cup to be played on August 13 and 16

Barcelona and Real Madrid will battle for the Spanish Super Cup at the beginning of the 2017/18 season and the dates for the two-legged contest have now been announced.

The first leg will take place at the home of the Copa del Rey winners, the Camp Nou, on August 13.

Then, on August 16, both teams will line up at the Estadio Santiago Bernabeu in the Spanish capital for the second leg.

Furthermore, the dates for the LaLiga season have been announced, with it being confirmed that the league action will begin on the third weekend of August and will finish on May 20, 2018.

As for the 2018 Copa del Rey final, it is provisionally scheduled to take place on April 21.

Ibrahimovic: There will be a very big announcement soon, it'll be huge

Given the serious knee injury picked up towards the end of the 2016/17 season, Zlatan Ibrahimovic's summer has been a complicated one, as he looks to find a new club following his release by Manchester United.

However, the Swedish striker has promised that there will be a significant update before long.

"There will be a very big announcement soon," The Express reported him saying as he left a meeting with his agent Mino Raiola in Manchester.

The 35-year-old has been linked with a number of clubs, including LA Galaxy, while The Sun has also reported that his Manchester United career might not be over, and that he could even end up penning a new deal with the Red Devils.

Either way, his future should be cleared up soon.

Nelson Semedo has signed a deal to join Barcelona this Thursday afternoon, with the right-back to move from Benfica to the tune of 30 million euros, plus a potential 5m euros in add-ons.

A group of Blaugrana directors - led by Jordi Bordas, Robert Fernandez and Raul Sanllehi - travelled to Lisbon on Thursday to finalise the deal, one which ticks off one of the club's transfer market priorities, that of signing a right-back.

Although the transfer has not yet been officially confirmed by the club, various sources insist that the deal has been done.

Given this price tag, Semedo will become the second most-expensive defender in Barcelona's history, following Dani Alves and the 36m euros - 30m plus 6m euros in variables - that Sevilla received for his move to the Camp Nou.

The 23-year-old is the second signing of the Catalan club's summer, after Gerard Deulofeu.

While the Chinese transfer market deadline is set on Friday for signings, player sales will still be possible which gives Barcelona the opportunity to acquire Paulinho until August 31st.

Marco Verratti remains the club's main target for midfield but considering that his move to Spain will be far from straight forward, los cules could try and tempt Paulinho in the final stages of the transfer window if their move for the Italian fails.

It makes the situation more comfortable for Barcelona who are now able to take their time and consider all the options on the table knowing that Paulinho could still come if in the end he proves to be the best bet.

Both Guangzhou Evergrande and Paris Saint Germain seem unwilling to let their stars leave, but as the transfer market moves towards the finish line anything can occur.

After collapsing during a friendly against Werder Bremen on Saturday, Ajax have confirmed the awful news that 20-year-old Appie Nouri has suffered serious and permanent brain damage.

The diagnosis was made after doctors performed a series of tests on the player.

Ajax had previously noted that Nouri had no serious damage after the heart attack in Innsbruck that caused him to be hospitalised urgently.

One of this summer's priorities for Jose Mourinho was to sign Real Madrid's Alvaro Morata, and a salary of almost 13 millions euros net shows how serious the Portuguese was about bringing the Spanish international to Manchester United.

Morata's agents were stunned by a contract offer of four years worth 230,000 euros net per week.

According to the radio programme 'El Transistor,' the transfer did not complete because Real Madrid, at the last moment, were nervous of selling a player of Morata's quality.

However, other teams are still after him.

One of them is Antonio Conte's Chelsea, though El Transistor also report that the player himself doesn't see this as a viable option.