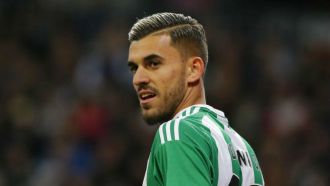 Sunday, 09 July 2017
That Dani Ceballos has chosen Real Madrid instead of Barcelona as his next playing destination is not surprising, because Los Blancos had long been chasing him whilst the Catalans only firmed up their interest after the recent U21 European Championship.

The Real Betis midfielder wowed everyone with a series of excellent performances in the competition, only serving to cement an approach from the powers that be at the Estadio Santiago Bernabeu.

In fact, Barcelona's interest only came about because Ceballos was offered to them in the course of the negotiations for Cristian Tello.

Betis put them on notice of the serious interest of Real, who wanted to sign the player, and emphasised his great quality.

Yet, as recently as a few months ago, Ceballos was seen as 'yet to mature' by Barcelona.

When panic set in, and realising that they could miss out on another potential target, even Josep Maria Bartomeu made a call to convince the player that they really wanted to sign him.

But it was too little, too late.

In truth, the technical staff never valued this transfer and only reacted warmly to the market opportunity presented to them.

The position of Real Madrid's third choice goalkeeper next season will likely be up for grabs with Ruben Yanez's expected departure, and Luca Zidane wants to make the spot his own.

Keylor Navas will continue as number one and Kiko Casilla - despite interest from Rafael Benitez to bring him to Newcastle United - will retain his place as second choice, leaving Zidane with third place to target.

Yanez is keen to leave the Estadio Santiago Bernabeu this summer and the club support his decision, with his place on the pre-season tour remaining a doubt as he could stay behind to focus on finding a move elsewhere.

Zidane will almost certainly join the squad on their tour this summer but he is not the only option to take the spot, with his Castilla partner Alex Craninx another candidate.

The departure of Yanez will also spark a debate, as the question will arise whether it is more beneficial to be third choice to the first team with an associated lack minutes, or a regular for Castilla.

With Marco Verratti almost ruled out, and with Dani Ceballos just a step away from being officially announced as Real Madrid's new player, Barcelona are still trying to get reinforcements for their midfield, one of whom remains Guangzhou Evergrande's Paulinho who is flattered by their interest.

The Brazilian international, who will be 29 at the end of the month, spoke about the potential of moving to Catalonia after losing 2-0 to Beijing Guoan in a Chinese Super League match.

"I'm not a hypocrite, but a very transparent person. And yes, obviously I think of Barcelona," he explained in an interview with Brazilian channel Band.

"Their offer is more important than we thought.

"My agent has told me that there are new conversations, and though most players do not comment on anything until something happens, I can confirm that the interest is real.

"I know that there is a formal offer, I think about 20 million euros, and that the president of Barcelona already spoke with directors of Guangzhou, although there was no agreement."

Neymar: I want Paulinho to play for Barcelona

It's only to be expected but Paulinho's countryman, Neymar, wants his international teammate to sign for Barcelona.

The Guangzhou Evergrande midfielder has become a possible reinforcement for Ernesto Valverde in recent days.

"Paulinho is a friend that I have in football and I want him to play at Barcelona," Neymar confessed.

"Because with a player like him, who is a friend too, we are going to win a lot."

An opening offer at around 25 million euros has already been rejected by the Chinese club.

"He can not leave Barcelona because he is the best," the Brazilian continued.

"He is a great player," the striker concluded.

- According to English media, Chelsea are behind in the race to sign James Rodriguez. PSG have taken the lead and the Colombian already has a foot and a half outside of Madrid after the arrival of Ceballos.

- Emery's goal is Mbappe but the difficulty in signing the striker of Monaco means PSG will have an alternative. And that's Philippe Coutinho according to L'Equipe.

- Il Corriere dello Sport dedicates its cover today to Aubameyang. According to the newspaper, the striker, who had already decided to reject the millionaire offer he had from China, is being hunted by Milan. He is priced at 80 million.

- Spalleti, the Inter coach, in statements to Gazzetta dello Sport, has hinted at a clear out of his squad. The list of casualties: Gabigol, Medel, Jovetic, Nagatomo, Biabiany, Santon, Joao Mario and Kondogbia.

- The BBC has unveiled the numbers of Lukaku's signing for Manchester United. The Red Devils will pay Everton 85 million pounds to get the striker. But there is the option of another 17 in variables.
Email : [email protected]
Προηγούμενο : Real Madrid will activate Mbappe transfer as soon as Morata is sold | Επόμενο : The fittest Benzema has ever looked
Προβολές : 472
- 4063 προηγούμενη ημέρα