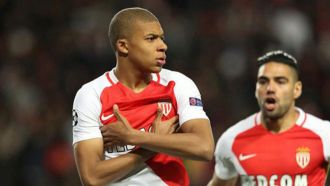 Friday, 07 July 2017
Kylian Mbappe is set to become the most expensive player in the history of football and his Real Madrid arrival can be brought even closer once Alvaro Morata's switch to Manchester United is finalised.

Currently, the Red Devils have the priciest player on their books with Paul Pogba, but Los Blancos will break that mark when they sign the 18-year-old Frenchman, for whom Monaco are requesting 130 million euros.

Many clubs - including Manchester United, Liverpool, Manchester City, Arsenal and, as reported by L'Equipe this week, Paris Saint-Germain - have reportedly enquired about the availability of a player Monaco know they would have to sell this summer - when he still has two years on his current contract - if they want to fetch anything close to their current asking price.

However, Real Madrid are the only one to have made a concrete proposal, offering 110m euros two weeks ago, despite lacking a fully completed deal with the player.

It was rejected and the European champions have yet to make another bid, but they have now done everything they can to convince the player that his future lies at the Estadio Santiago Bernabeu.

Mbappe had his doubts - not over money, but over playing time - but these have been eased and a deal for a six-year contract and a salary between 6m and 7m euros has been set up, one which would make him the fifth-highest earner in the squad in spite of his young age.

Mbappe has been shown around Valdebebas and Zinedine Zidane has been in contact with him and his family, persuading him to move to the Spanish capital and to complete his dream.

On June 13, Florentino Perez also held talks with the Frenchman, meeting with him and his father in a Paris hotel after Les Bleus' friendly against England and promising him playing time.

Then, just last week, the club president explained that it was not the team's intention to have Mbappe warm the bench.

"We're not going to bring in players just to leave them on the bench," he told EsRadio's 'El Primer Palo' show.

"If Zidane gives the OK for this then he'd also have to say who should leave."

While the coach told Perez a month ago that the BBC member whose exit would cause the least disruption would be Gareth Bale, that does not mean the Welshman will leave the club and the space that will open up will be Morata's backup role.

Even though his father Wilfried has been told that Mbappe would be signed once Morata's exit was confirmed, in addition to that of James Rodriguez, he remained sceptical of how many minutes his son would earn when competing for action with the BBC front three.

The option of signing the player and loaning him back to the Stade Louis II had been considered, but now appears to have been shelved and he would have to compete with the BBC trio if he joins now.

Given their three Champions League wins in four seasons, Karim Benzema, Bale and Cristiano Ronaldo - who Real expect to say - remain the stars of the show, but the capital city club also know that they cannot afford to wait until next summer to make a move for Mbappe.

That's because there is a risk of losing him, with other clubs lurking, just as happened when Gabriel Jesus ended up signing for Manchester City last year.

As such, the 'Mbappe Operation' will get underway once Morata's Old Trafford ticket has been purchased, with that transfer inching closer and closer towards completion.

Dani Ceballos has given himself a few weeks to decide whether it will be Real Madrid, Barcelona or another club who pay his release clause of 15 million euros.

The capital city side are the ones who have been following the midfielder closely for over a year and they believe they will be making an agreement with Real Betis shortly, not their Catalan rivals.

Providing the departure of James Rodriguez, the Under-21s European Championship finalist will be given a designated spot in Zinedine Zidane's squad, as reported previously by MARCA.

The two-time Champions League-winning coach is serious about the current Betis starlet and is convinced he will earn minutes and that he will fit in, due to his talent and ability to work hard.

Los Blancos are set to jet off to the United States this summer and the Frenchman expects to see the 20-year-old in Los Angeles with his La Rojita teammates Marcos Llorente, Marco Asensio and Jesus Vallejo.

After impressive displays in Poland, the trio were expected to have a month's break, similar to that of Cristiano Ronaldo, but the players are keen to return promptly and to impress.

The keys to the last 24 hours of Morata negotiations

The situation surrounding Alvaro Morata's transfer from Real Madrid to Manchester United remains complicated, and the move now looks further away than ever before with a fee being agreed for Romelu Lukaku's move to Old Trafford.

Negotiations began with Madrid wanting 100 million euros for the Spaniard, in order to complete a move that the striker himself had asked to push through.

Real were reluctant to let their player go and felt no need to sell, but it did look as though a deal to take Morata to England would be reached, it was only a matter of time.

Eventually, Real Madrid agreed to accept 80m euros with an additional 10m euros dependent on how many goals he would score for the English club, but differences remained and both clubs were separated by approximately 5m euros.

The protracted nature of discussions between United and Real resulted in the former turning their attention to 'Plan B' - Everton's Romelu Lukaku - who was sold by Jose Mourinho during their time together at Chelsea.

Many in the English media are suggesting that a deal is close to complete but it is still some way away. Should it go through, Antonio Conte's attention will likely move in the opposite direction from Lukaku to Morata.

Mourinho himself has been in constant contact with Morata and has done everything possible to make a move go through, but the final decision will be made by those upstairs at both clubs, who have not always found it easy to agree with one another.

Morata is expected at Real Madrid training on Monday, but for now he is disappointed that his move to Manchester has not yet been made official, while Real are not willing to budge on their demands for the striker.

Jesus Vallejo's step up to the Real Madrid first-team will be officially announced on Friday, July 7, at Estadio Santiago Bernabeu.

With Pepe leaving the club for Besiktas, a gap at centre-back has opened up and Spanish Under-21 international Vallejo is to get his chance after a promising loan spell at Eintracht Frankfurt.

At 13:00 CET, the centre-back will face questions from the press and show off his Real shirt before a presentation out on the pitch.