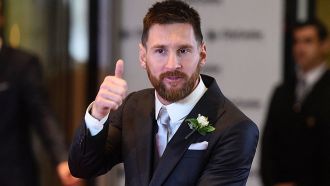 Messi seals his Barcelona renewal, extending to 2021 with a €300m release clause

Wednesday, 05 July 2017
Barcelona and Lionel Messi have finally come to an agreement and the player will renew his contract with the Catalan club until 2021, with a further one-year option.

As for the Argentine's release clause, under the new deal it will be set at 300 million euros.

For the Blaugrana, this is a relief as they can now fully focus on their other summer business now that the star of the team has committed his future to the Camp Nou institution.

The 30-year-old, who is currently enjoying his honeymoon after last Friday's wedding, will put pen to paper on this new deal next week when he returns to Catalonia to join his teammates for the start of pre-season training.

Cristiano Ronaldo sent a shockwave through the transfer market and through the footballing world three weeks ago when a desire to leave Real Madrid was leaked, but the capital city club have hardly batted an eyelid and have remained calm throughout.

In the view of the club's directors, the situation has now improved and they are pressing on with their other transfer market business as if nothing had happened.

Those in the Real Madrid hierarchy believe that the situation was the result of mismanagement from third parties and they consider Ronaldo to be committed to the cause.

Just as the club directors haven't been put off their other work as a result of the speculation over the 32-year-old's future, the rest of the Real Madrid squad have remained similarly confident of his continuation and haven't let the rumours disturb their holiday time.

While it is true that Zinedine Zidane did call the player to suss out what was really going through his mind, the other leaders of the dressing room did not get in touch with the Portuguese forward.

Players like Sergio Ramos believed it was a personal decision and did not think then was the time to put extra pressure on the No.7.

Instead, the captain has preferred to let the time pass and to wait until he sees Ronaldo in person again to discuss the situation.

Ceballos hopes Real Madrid will make space for him

As a result of the growing interest in his talents, Dani Ceballos is currently at a fork in the road as he decides where he should spend the next several years of his young career and the 20-year-old's slight preference is to move to Real Madrid.

However, he knows that Los Blancos are already very well stocked at the midfield position and that they have a large squad, so a space would have to be created in order for him to move to the Estadio Santiago Bernabeu.

That is why the departures of the transferable James Rodriguez and Alvaro Morata would crucial to making a transfer from Real Betis to Real Madrid happen this summer.

At Barcelona, on the other hand, there would already be space for Ceballos and he would be important to their plans from day one if he accepts their offer of a four-year deal, with an optional one more.

Florentino Perez: There's no room for self-indulgence at Real Madrid

Students from Real Madrid's School-Universidad Europea heard an inspirational message from club president Florentino Perez as they graduated on Monday.

Perez, who has just won re-election at the capital city institution, told the class to aim high and to constantly look to improve.

"The great driving force behind the legend that is Real Madrid is that there's no room for self-indulgence here," he told them.

"The demands at this club mean that we're constantly having to work and innovate to remain top of the pile.

"We're proud of our graduate school and 1,428 students have studied on our masters programmes this year, of which 426 students of 49 nationalities are graduating here today.

"Everything that we have achieved revolves around a spirit of always wanting to better ourselves as we strive for excellence in a spirit of fair play and solidarity."

He also spoke of the fact that there is now a lifelong link between Los Blancos and the graduates.

"Values have been instilled in you at this school that I hope that you'll take away with you," Perez said.

"These values have enabled Real Madrid to become an institution that is universal, respected, loved and admired."

Several other Real officials were also in attendance, including general director Emilio Butragueno.

Paris Saint-Germain are in pole position to bring Kylian Mbappe from Monaco to Paris after L'Equipe revealed that the two parties held a meeting to discuss a transfer.

According to the paper, the capital club are stepping up their pursuit of the youngster and the player's father met with President Nasser Al-Khelaifi and sporting director Antero Henrique.

For several months there has been uncertainty over Pepe's future, but he has now put pen to paper on a contract that will see him play for Besiktas next season.

There were offers from Inter and Paris Saint-Germain, while staying at Real Madrid was also an option for some time, but the 34-year-old has ultimately chosen to take his talents to Turkey and he signed up with his new club on Tuesday, wearing their shirt as he did so.

The defender also uploaded an image of the team's Vodafone Park with the message "Besiktas, this year?"

All that remains now is for the Istanbul-based club to make their own announcement of the signing.

Donnarumma, the latest young player to be pressured into a decision

While supporters and directors may think that the main motivation for a young player in the modern game is to earn the most money or to join the most competitive club, there is another factor which is often overlooked.

It is becoming increasingly more common for players under the age of 20 to be pressured into taking decisions by other influencers, whether their own family, a club or society in general.

Gianluigi Donnarumma is just the latest example of this, but he is not the only one and other Real Madrid targets like Dani Ceballos, Kylian Mbappe and Theo Hernandez are, or were, being pressured to pick one option over another.

Over the last few weeks, the 18-year-old goalkeeper has been under intense scrutiny for his decision to turn down a contract renewal with AC Milan.

From the throwing of fake dollar bills in his direction at the Under-21s European Championship to the public declarations of the club and his agent Mino Raiola, the Italian has been influenced from all sides and ultimately has decided to sign a new deal.

Ceballos, pressured by his past

For the Real Betis midfielder, he could end up making a major decision based on his younger self.

That's because tweets from his teenage years have been discovered in which he spoke negatively of Barcelona and these tweets could now prevent him from joining a club where many members of the fanbase will be sceptical.

Mbappe and the persuasion of his family

The Monaco forward has been quite clear that he wants to play for Real Madrid, yet his family and those around him, specifically his father, would rather see him at Paris Saint-Germain.

Whether or not he gives in to that pressure remains to be seen.

The alternative case of Theo Hernandez

In this example, Theo Hernandez resisted the pressure put on him by Atletico Madrid, staying true to his desire to play for Real Madrid despite the calls from Diego Simeone.

He will be presented as a Blanco on Friday, but he too could have ended up taking a different path to that which he himself preferred.
Email : [email protected]
Προηγούμενο : Donnarumma to renew, but release clause to half if AC Milan miss out on Champions League | Επόμενο : Real Madrid will activate Mbappe transfer as soon as Morata is sold
Προβολές : 487
- 4170 προηγούμενη ημέρα