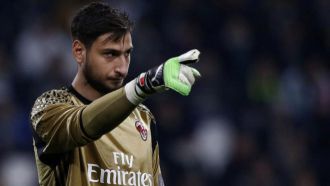 Donnarumma to renew, but release clause to half if AC Milan miss out on Champions League

Tuesday, 04 July 2017
An offer of 13 million euros per season from Paris Saint-Germain was on the table for Gianluigi Donnarumma, but the goalkeeper is set to turn it down in order to sign a new deal with AC Milan, one which will earn him 6m euros per year until 2022.

However, he could leave the Serie A club much sooner if they miss out on Champions League football as his release clause will be halved should the Rossoneri fail to qualify for UEFA's premier club competition.

According to Italian media, he will renew with the club in the coming days and his new contract will have a standard release clause of 100m euros, but one which drops to 50m euros if Champions League football isn't secured.

As such, the 18-year-old will surely be playing in the continental competition in the 2018/19 season, whether for AC Milan or for another club.

There remains much to be discussed over Alvaro Morata's future as the player's agent and his father travelled to the Estadio Santiago Bernabeu to meet with Real Madrid bosses on Monday morning.

Intent on leaving for Manchester United, the striker has agreed personal terms with the Red Devils and wants to complete the deal quickly so that he can start pre-season with his new side.

However Los Merengues are holding out for 90 million euros in exchange for Morata, who has so far only been subject of a 70m euro bid by United.

That logjam led to Juanma Lopez, the player's agent, and his father Alfonso descending upon Real offices on Monday for fresh talks over the transfer.

Zinedine Zidane, meanwhile, would prefer Morata to continue with Los Blancos but his intentions to leave were made clear to Lopez a month ago with a deal now long in the offing.

Javier Ribalta has joined Manchester United's sporting department, an acquisition which could be important in the Red Devils' pursuit of Alvaro Morata.

That's because Ribalta previously worked at Juventus and was involved in the deal to sign the Spanish striker from Real Madrid three years ago.

So important was he in making that switch happen that he featured in the RMTV documentary about the player, named 'Campo de Estrellas' - or 'Field of Stars' in English.

He maintains a good relationship with 24-year-old and was even invited to his recent wedding in Venice, so he'll hope that they can reunite in Manchester.

The Catalan director began his career in Spanish football with Figueres and Castelldefels , before stints at Torino, AC Milan, Novara and then Juventus.

Now he begins a new chapter as he departs for England, where he'll aim to bring the glory days back to Old Trafford.

Manchester City were able to complete the signing of Barcelona youngster Eric Garcia due to the player's determination to join them, according to Pep Guardiola.

The 16-year-old will depart La Masia this summer in order to link up with the former Blaugrana coach at the Etihad Stadium.

"He wanted to take this step in his career and we gave him the opportunity to do so," Guardiola told TV3 when discussing the move for Garcia.

"I have heard very good things from people about him.

"I have good reports about him.

"I haven't been lucky enough to see him play for myself yet, but people spoke very highly about him and we had the chance to sign him."

It is a transfer which has not gone down well at Barcelona, who will receive a fee of 1.5 million euros from City for the defender's signature.

Serra Ferrer: Barcelona asked for an opinion on Ceballos and I gave one

Real Betis were able to unveil Cristiano Tello to the media on Monday and conversation naturally turned to Barcelona's interest in fellow Spaniard Dani Ceballos.

Reports that the Andalusians would prefer a sale to the Camp Nou over Real Madrid have surfaced but Betis vice-president Lorenzo Serra Ferrer gave only hints about the specific interest in Ceballos.

"I have dedicated my time to convincing and approaching Tello," he told reporters. "With Dani I was asked for an opinion [by Barcelona] and I gave it, as you can imagine.

"It is precisely because of [Ceballos' Under-21 success] that we must congratulate him, we are proud of the representation that we have had. He is loved and valued, hopefully he continues here, not just one season more, but many more.

"That is our wish and I express it as vice-president, but there is another person, Dani, who thinks that if he goes to a big club he can also feel more fulfilled. We do not agree 100 percent with that and we would like him to continue."

Denying the idea of a meeting with Real over Ceballos' future, Betis have already spoken to the starlet and hope to persuade him to stay.

"It was very friendly, very correct," Ferrer added. "He understood that sometimes defeat, when felt in the dignified manner that it was, helps us to grow a little although we'd prefer it the other way around.

"We talked about things, not so much the depth of this team or any other. It was a kind and respectful conversation. We have to wait until tomorrow or the day after for the coach to talk to him, and see if he gives him his support, and to see that the project is based not only on him but on football players like Tello, and I am convinced that this can influence him."

Sandro is officially an Everton player

Given the unpredictability of the market, a transfer is never fully completed until pen has been put to paper, which is exactly what Sandro has done this Monday.

He is now an Everton player and has already donned the famous blue jersey.

"This is a great step for me in my career," he said of the switch on British television.

"Everton is the ideal place for me, with a great coach."

His move from Malaga, where he spent one season, to Goodison Park will cost the Premier League club six million euros, the price stated in his release clause.

Ahead of the 2017/18 season, Real Madrid are to overhaul their first-team medical staff, with chief doctor Jesus Olmo among those to leave the club.

The decision has been provoked by Olmo's decision to undertake some new external projects, say club sources.

As such, Los Blancos decided that now was an opportune time to make a change in the department, one which has come in for criticism in the past.

Among the other members of the medical team who are likely to leave is surgeon Mikel Aramberri, who arrived at the Estadio Santiago Bernabeu in 2015.

As for replacements, several names have been suggested, including the current Castilla doctor, who Zinedine Zidane is believed to be ready to endorse.
Email : [email protected]
Προηγούμενο : Fernando Santos: Portugal do not play better without Cristiano Ronaldo | Επόμενο : Messi seals his Barcelona renewal, extending to 2021 with a €300m release clause
Προβολές : 535
- 4413 προηγούμενη ημέρα