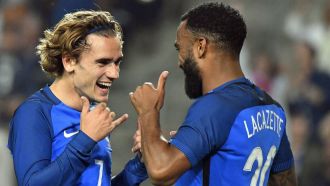 Monday, 26 June 2017
Alexander Lacazette was one of Atletico Madrid's summer targets and they were willing to pay 65 million euros for him, at least until they learned their transfer ban was to be upheld.

"Everybody knows that Atletico offered 53m euros [for Lacazette], which is 65m euros when including add-ons of 12m euros," he told L'Equipe.

"The Arsenal directors have been informed of this because that should be the price for a player who scores 25 to 30 goals per season, and sometimes more than 30.

"Frankly, though, I hadn't thought about Arsenal at any point because I thought Alexander [Lacazette] would go to Atletico."

For Aulas, a transfer to the Spanish capital isn't necessarily off the table just because of the transfer ban.

"At the moment, I have no interest in selling him because there is always the interest from Atletico to sign him on January 1, 2018."

"I'm also listening to the interests of the player.

"I understand there is interest from Arsenal, but it's premature to say it'll happen.

"We cannot allow ourselves to be left without a replacement for a player of such quality."

As a result of Atletico's transfer ban, they cannot register players until next winter, which could be an off-putter for top-class players given that this is a World Cup year.

His arms have lifted two Champions Leagues, a Supercopa d'Europa and a Club World Cup, and legendary Real Madrid captain, Sergio Ramos, is waiting for the federation to deliver him last season's LaLiga trophy.

Five titles, which add to the 13 previously achieved and which put him in a position to be the most lauded captain in the history of Los Blancos.

Ramos has a shot at retiring with a record that would put him at the very top of the club ... and for a long time; the player with the most titles in history as a player of Real Madrid, adding together the championships for club and country.

Those 18 remain five off of the current all-time record held by Francisco Gento with 23, but first he must pass Sanchis (21 titles in 18 seasons) and Iker Casillas (21 in 16).

Taking into account Ramos is 31, he is very close to finishing his career having completed 12 seasons at Real compared to Gento's 18.

Casillas added nine titles at Madrid before the arrival of his old teammate in 2005: two leagues, two Super Cups, two Champions Leagues and a European Super Cup in addition to the Intercontinental Cup of 1998.

In a season in which he won four titles, Ramos therefore managed to pass Camacho and Hierro (17 titles) and tie with Chendo.

Around Sanchis and Iker

If Madrid manage to win the next two Super Cups and the Club World Cup, Ramos will equal Sanchis and Iker and will stay two behind Gento.

With a Champions Cup and league title already wrapped up, Guti led Real Madrid's Juvenil youth team into this Sunday's Copa del Rey final against Atletico Madrid with a treble on the line - and they secured it.

By defeating their city rivals 4-1, the youngsters made history and lifted yet another trophy.

As has been the case throughout this campaign, Oscar took the initiative for Los Blancos and scored the opener from a free-kick in the 12th minute.

Los Rojiblancos did pull level just before half-time, though, with their own Oscar giving Guti plenty to think about at the break.

Neither side could score in the second half, yet a terrific display in extra-time saw Real finish up as 4-1 winners, just like in the 2014 Champions League final, with Alberto, Toni and Gelabert scoring the goals.

It means that the only trophy to have eluded Guti's youngsters this season was the UEFA Youth League, a tournament in which they fell at the semi-final stage.

Barca B return to the Segunda

Two seasons after their last (and traumatic) relegation, Barcelona will again have its second team in the Segunda (Second) Division.

From that day to this, the club were forced to give more importance to the competition than to training and that's why Gerard Lopez's team had sacrificed the principles of possession and position towards a more practical and direct football ethic, designed to succeed.

The promotion will give joy to players like Jose Suarez and Gerard Gumbau, who were part of the relegated class of 2015, but at the same time it opens up new possibilities for those at La Masia.

Which profile of players will compete in the Estadio Nuevo Los Camenes or at El Molinon against Granada and Sporting?

How often will there be a relationship with the first team, now led by Valverde?

The 4-1 win at El Sardinero almost confirmed Barca B's ascent before Sunday's second leg of the play offs, and Racing Santander's 800 supporters who made the trip will be deeply disappointed with their side's showing at the Mini Estadi.

Scarcely troubling their opponents, Racing simply let the minutes pass without any play of note.

It was the knowledge of Barcelona's Marlon and Martinez, the centre-back pairing, and the deployment of Palencia and Cucu out wide, which triumphed.

Only Heber and Dani Aquino were up for the fight for the visitors before the break.

In the second half, Angel Viadero ordered a double offensive change that broke the monotony of the first period.

However, it was the hosts who played the better football and deservedly too the plaudits at the end of the match, including from president Josep Maria Bartomeu who was in attendance.

Costa, 28, has been Chelsea's top scorer in all three seasons since joining the club in 2014, leading them to two league title wins.

Earlier this month, the Spain international said that he would leave Stamford Bridge after being told by manager Antonio Conte that he was not a part of the club's future plans.

"He's a fantastic striker and we all saw that last season and since he's been at Chelsea. He would be very difficult to replace, there's no doubt about it," Lampard told Sky Sports.

"He's an all-round physical presence that also has the quality to get goals, that's not easy to find in the modern day."

Costa scored 22 goals in 42 appearances for the London side last season but the club have been linked with a move to get Everton striker Romelu Lukaku, who scored 26 goals last campaign, back to Stamford Bridge.

"He's (Lukaku) certainly developed to a huge degree since he left the club (in 2014), Romelu would certainly be a good option. The only thing Chelsea have to look at is the inflated market that is around now, it makes it very tough," Lampard said.

Costa has said he would favour a return to former club Atletico Madrid but the Spanish side are unable to register new players until January 2018 due to a transfer ban by the Court of Arbitration for Sport (CAS).
Email : [email protected]
Προηγούμενο : Neymar: I'm encouraging Lucas Lima to join Barcelona | Επόμενο : Bale remains untouchable at Real Madrid
Προβολές : 538
- 3907 προηγούμενη ημέρα