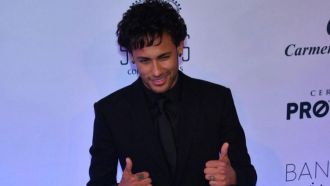 Saturday, 24 June 2017
Barcelona striker Neymar is doing his part to convince compatriot Lucas Lima to join the club in January.

As the Blaugrana look to strengthen their midfield, the Santos man is one of the men they have identified as a transfer target.

"He is a great friend of mine and I'm encouraging him to join Barcelona," Neymar said. "I hope everything goes well, we would welcome him with open arms."

Reports in the Brazilian media suggest that an agreement has already been reached between Barcelona and Santos over the transfer of the player during the winter window.

However, while in attendance at the same charity event as Neymar, his father, who is also Lima's agent, insisted that no discussions have taken place as yet.

Marco Verratti may have made moves to leave Paris Saint-Germain this summer, with a view to a transfer to Barcelona, but his teammate Marquinhos isn't convinced that the Italian will leave the French capital.

Although the Brazilian defender said he has seen speculation suggesting the midfielder wants to move on, he isn't buying it.

"From afar, I have read a lot, but I don't know where the truth is," he said in an interview with L'Equipe.

"He never said he wanted to leave PSG.

"He is a great player and an important part of PSG's project, so I hope he'll stay with us.

"I do not want him to go and, frankly, I don't think he will leave us."

Marquinhos also spoke about his club's 2016/17 campaign and said he was excited by the way they finished the season.

Donnarumma's father: We only want the best for him and for him to be happy

Gianluigi Donnarumma has been the talk of Italy and most of Europe over the past week as a result of his decision to reject a contract extension with AC Milan and his parents hope that the focus on his future doesn't last much longer.

The goalkeeper's father Alfonso Donnarumma has explained that his only wish for his son to be content.

"We hope that the media hype surround this issue will finish soon," he told La Gazzetta dello Sport.

"As parents, we never want to condition his decisions.

"We only want the best for him and for him to be happy."

Vincenzo Montella, the team's coach, also met with the 18-year-old's father this week, a discussion which might have helped persuade the family and the player to remain in Milan for the 2017/18 season.

Zidane and Mbappe have already discussed a move to Real Madrid

It's no secret that Kylian Mbappe is determined to sign for Real Madrid, but the player has reportedly gone one step further and has already discussed a move to the Estadio Santiago Bernabeu with Zinedine Zidane.

The French coach assured the 18-year-old that he would rack up plenty of minutes if he were to move to the Spanish capital.

The story is reported on L'Equipe's front page this Friday, while it has also been reported up by Onda Cero's 'El Transistor' programme and by Radio MARCA.

Not only has the French newspaper suggested that the forward will be given the playing time he craves, but they even suggested that Real Madrid could let a member of the BBC front three leave, meaning one of Karim Benzema, Gareth Bale or the wantaway Cristiano Ronaldo.

Zidane also reportedly told Mbappe during this secret chat that he can make him a world star.

Messi's 21-month prison sentence to be replaced with a fine

Spain's public prosecutor has agreed to swap the 21-month suspended prison sentence given to Lionel Messi for tax fraud for a fine.

The Barcelona player had been found guilty of defrauding the Spanish tax authorities of 4.1 million euros, along with his father, but a lack of previous offences and the fact they agreed to pay the money owed means the original punishment is set to be scrapped.

Under Spanish law, Messi would not have had to serve jail time for such a short sentence anyway, but now he will not have any months against his name, legal sources have informed Efe.

According to El Mundo, the player will pay 252,000 euros, while his father will pay 180,000 euros, with the proposed amounts based on the criteria used when Javier Mascherano was handed a similar punishment by same Catalan court.

This comes despite the fact that the Supreme Court upheld Messi's 21-month sentence and reduced his father's to 15 months in May.

Bayern Munich may have previously looked like the most likely landing spot for Alexis Sanchez should he leave Arsenal this summer, but reports in England now consider Manchester City the leader in the race for the Chilean's signature.

Pep Guardiola has already worked with the forward, during their time at Barcelona, and he could welcome him to the Etihad before the current transfer market slams shut.

Various English publications believe City have the best chance of signing the player, who is said to be unconvinced by Arsenal's offering.

While his future is debated at home and abroad, Sanchez is currently representing Chile at the Confederations Cup.

Pellegrino takes over as Southampton manager

Argentine Mauricio Pellegrino was named as manager of Premier League Southampton on Friday, the week after the club sacked Claude Puel.

The 45-year-old has agreed a three-year contract and will arrive at St Mary's next week to prepare for the new season.

Pellegrino, who won La Liga as a defender with Valencia, began his coaching career as an assistant at Liverpool before spells with Valencia, Estudiantes, Independiente and Alaves.

"I am delighted that after a diligent selection process we have recruited Mauricio Pellegrino as our new first team manager," Southampton vice chairman Les Reed said in a club statement.

"We had an impressive list of candidates and went through a comprehensive interview process. Mauricio impressed us throughout with his depth of knowledge, motivation and ability, communicating this in a professional and passionate way.

"He has an excellent understanding of the Southampton way, and his style of play and aspiration matches the philosophy, culture and ambition of the club."

It is the second time Southampton have turned to an Argentine coach having employed Mauricio Pochettino for 14 months before he joined Tottenham Hotspur in 2014.

Pellegrino said he was "excited and passionate" about the future with the south coast club.