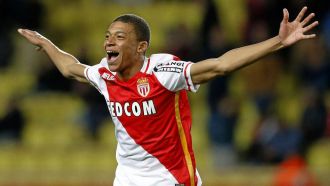 Friday, 23 June 2017
Jurgen Klopp wants Kylian Mbappe at Liverpool at all costs, but their second offer to achieve what could be the signing of the summer - a mammoth 100m euros - has been rejected by Monaco.

Dmitri Rybolovlev, owner of the Ligue 1 team, doen't seem to have much intention of selling his striker and in any event, has always maintained that the starting price will go beyond the 114m euros that Manchester United paid for Paul Pogba last summer.

In addition, the will of the player should be remembered; if he wants to stay at Monaco, the club are more than happy to keep him.

Klopp has offered the player many minutes leading up to the 2018 World Cup, however, it doesn't appear that this has changed Mbappe's mind.

The only club he would leave the principality for is Real Madrid, something he's already communicated to Rybolovlev.

He's very clear that the moment he believes he can have a presence in the Real XI, he will take the step to transfer to the Estadio Santiago Bernabeu.

Cristiano Ronaldo not planning to pay the €14.7m he allegedly owes tax authorities

On July 31, Cristiano Ronaldo will trial in front of judge Gomez Ferrer at Court Number One in Pozuelo de Alarcon, accused of defrauding the Spanish tax authorities of 14.7 million euros between 2011 and 2014, and he does not plan to pay that money back before legal proceedings begin.

As such, the speculation that the player would voluntarily pay that sum to the authorities has been ruled out.

This decision was confirmed to EFE by sources at Gestifute, the company which represents the 32-year-old, who is currently in Russia playing in the Confederations Cup for Portugal.

Upon learning of the charges being brought against him, Ronaldo hired lawyers Jose Maria Alonso Puig and Luis Briones of Baker&McKenzie, who will defend the player in court.

Kylian Mbappe and Gianluigi Donnarumma have both verbally committed their futures to Real Madrid, but it remains to be seen if the two 18-year-olds will arrive at the Estadio Santiago Bernabeu this summer or next.

Zinedine Zidane will be the one to make that decision and he has a meeting with Florentino Perez in the coming days.

The fact that Los Blancos' squad is already packed full of star names means he could look to avoid adding another two into the mix prematurely and unnecessarily.

It should be noted that both players' cases are slightly different, with Mbappe still sitting with two years on his Monaco contract, while Donnarumma only has one year remaining at AC Milan.

The French forward is excited to work with Zidane, but the coach would still have to convince him that he would earn enough playing time though his squad rotation if he were to make the switch this summer.

If the coach and the player agree to make the transfer happen during this window, then the fee would likely be in the region of 100 to 110 million euros - which is a short of the 130m euros the Ligue 1 champions are asking for, but which is expected to be sufficient.

As for Donnarumma, he has just 12 months left on his contract and Real Madrid could wait until the summer of 2018 to sign him without having to pay a transfer fee, but with the risk that he might change his mind and sign on some other club's stationary.

The other option would be to purchase him now, with 30m euros to 35m euros likely to be enough for AC Milan, given the player only has a year left on his deal.

For Los Blancos, that figure would be similarly satisfactory, as they know that Donnarumma could be their shot-stopper for the next 15 years or so.

In the end, it will be Zidane who decides when these two starlets make their way to the Spanish capital.

Dani Alves will leave Juventus this summer and the Champions League runners-up have identified Danilo as a possible replacement.

The Turin-based club's CEO Giuseppe Marotta confirmed Alves' departure on Wednesday, but he and his team have already made moves to fill that spot in the squad, with contact between the Serie A champions and Danilo's representatives already made.

First reported by Sky Italia and confirmed by MARCA, the interest could be tempting for Real Madrid's backup right-back.

He is happy in the Spanish capital and, perhaps more importantly, Zinedine Zidane is happy with him as Dani Carvajal's understudy, yet the chance to earn more playing time at another European giant could be too good to turn down.

Egyptian winger Mohamed Salah has completed his move to Liverpool from AS Roma, the Premier league club said on Thursday.

British media reported that Liverpool paid 34 million euros (£30 million) to sign Salah, who is returning to the Premier League two and a half years after leaving Chelsea following an unproductive 12-month spell in which he scored two goals and started six Premier League games.

"I will give 100 percent and give everything for the club. I really want to win something for this club."

The 25-year-old flourished in Serie A, rediscovering the form that marked him out as one of Europe's emerging talents at Basel and persuading Chelsea to pay 11 million pounds ($14 million) for him in 2014.

After a six-month stay at Fiorentina, during which he scored six goals in his first seven games, Salah proved a major force in Roma's improved form.

He will hope to join a list of former Chelsea players, including Manchester United's Juan Mata, Manchester City's Kevin De Bruyne and Everton's Romelu Lukaku, who have prospered after leaving Stamford Bridge.

Liverpool manager Juergen Klopp has been keen to add depth and quality to a squad that will face a Champions League campaign in 2017-18.

Salah will form part of a potent Liverpool attack which includes Sadio Mane, Roberto Firmino, Divock Origi and Daniel Sturridge, although the latter has been linked with a move away from Anfield.