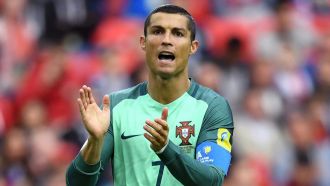 Thursday, 22 June 2017
When the time comes for Florentino Perez to meet with Cristiano Ronaldo and thrash out the player's future, the Portuguese will be in possession of a firm offer from Paris Saint-Germain to put on the table.

He is still willing to leave Real Madrid and the meeting will be held after the Confederations Cup.

The club don't want to let him leave at any price but that's precisely why Ronaldo will bring a 'money no object' offer from the French club.

MARCA already noted on Tuesday that he prefers a move to Paris.

Florentino hopes to convince his striker that it is best to remain in the Spanish capital, but if Ronaldo is determined to leave and presents the offer of almost 200m euros, it will be very difficult to keep him.

Of course, the player won't close any door to his future.

That is to say, it should not be ruled out that the president convinces him to stay.

The PSG offer is not the only one that Ronaldo has.

In China they are willing to make him a multi-millionaire to go to the most emerging league in the world.

One major problem is that the player doesn't want to leave European football.

At 32, and with the fifth Ballon d'Or almost in his hand, he believes he has to keep winning titles in the big leagues to be the best in the world.

Sergio Garcia: Real should look for what's best for the club, not for Cristiano Ronaldo

A well-known supporter of Real Madrid, Sergio Garcia does not miss a game - not even during a tournament - and he's told the club that they should be looking for the best deal for them as well as want-away Cristiano Ronaldo.

Wherever he goes he is asked about Los Blancos' current status and the BMW International Masters, who have been on the road since Thursday, was no exception.

The golfer always answers honestly and did so on Tuesday when a journalist wanted to know his opinion on the possible departure of the Portuguese.

"As an amateur it is sad to see that one of the best players we have had is able to go," he said.

"But at the same time, Madrid should look for what is good for the club, not only for Cristiano.

"An amount of money with which they can maybe sign up young players who could play in the club for the next decade."

Florentino: Zidane made the right decision to become a coach

Zinedine Zidane's decision to go into coaching after his playing career was undoubtedly the correct one, according to Real Madrid president Florentino Perez.

He has been a rich part of the club's history ever since signalling to Perez that he wanted to sign in August 2000.

The Los Blancos chief is delighted to have him at the club and was happy to pay a glowing tribute to him for delivering a first LaLiga and Champions League double in almost 60 years last season.

Do you remember all of those who called you crazy when you decided to make Zidane the coach 18 months ago?

"It is normal for people to doubt him because he hadn't coached a senior team and had barely any experience. What did bother me more were those that tried to hurt Real when we signed him. The day he decided to be a coach he was right, because he has proved to be the best one."

What led you to decide on Zidane?

"It is hard to get a clear idea of what this club is like. He was a player for five years and knows it well which made it easier to handle for him. He identified himself perfectly with Real's values as he is a responsible and respectful person. He was the best coach we could have chosen so it was a simple decision and he has been a big success."

When will a new deal for him be made official?

"It is one of the first things we will do in the coming days."

But Zidane doesn't worry much about contracts and signatures does he?

"He has always relied on a person's words and what we have said to each other. He's the only player who never asked for more money. I asked him what he earned at Juventus, he told me and I told him what I would give him at Real Madrid. It wasn't a problem."

What is Zidane referring to then?

"Confidence in the club. He identifies a lot with Real so we don't discuss money. If you are a professional, Real do pay well."

Is it the only case of a professional who isn't interested in contracts?

"Yes and that isn't easy. He isn't someone who is attached to money. He believes that money comes as a result of a job well done. First, work hard then the money will come. He doesn't have money in his head permanently."

He didn't have the best of debut seasons at Barcelona but the club has still rejected an offer of 35 million euros from a Premier League club for Andre Gomes.

Jorge Mendes advised the Catalans of the offer but their response was clear.

"Andre Gomes will not be sold," they said.

In addition, they declared him non-transferable.

Strengthening midfield with Marco Verratti is their priority, but if he arrived the Italian would not take the place of Gomes.

The Portuguese, for the moment, is untouchable as neither Ernesto Valverde nor the board want to get rid of him.

Juventus defender Leonardo Bonucci has insisted that allegations made about a dressing room altercation with Paulo Dybala during the Champions League final were false.

At half-time against Real Madrid in Cardiff the score was level at 1-1, with Los Blancos going on to run out 4-1 winners.

Italian newspaper La Stampa subsequently claimed that Bonucci was angry with Dybala over his 12th minute tackle that led to a booking and even suggested that he had hit the Argentine.

However, the defender posted a message on social media to state that there was no truth to the accusations that have been made.

"There was no discussion, much less any physical confrontation," he said on Facebook.

"It was a half-time break like many others, during which nothing much happened.

"If my words aren't enough in this case then I'm ready to speak to my lawyers and take legal action to clear my name and defend my honour if needs be."

Dybala did not go on to receive a second booking in the match, although Juan Cuadrado did receive his marching orders for two yellow cards.

Former Real Madrid player Angel Di Maria has reached an agreement with Spanish prosecutors over a tax evasion charge related to his image rights, a Madrid-based court said on Wednesday.

Under Spanish law, a first-time offender is not required to serve time in jail for a sentence below two years.

The Argentine midfielder is accused of failing to pay some 1.3 million euros to the Spanish tax authorities in 2012-2013 by giving up his image rights to companies based in tax havens, such as Panama.

It was not immediately possible to reach Di Maria's representatives for a comment.

The deal comes amid a lengthening list of cases of tax evasion by high-profile players such as Real Madrid striker Cristiano Ronaldo and Manchester United manager Jose Mourinho, whose charges date back to when he coached Real Madrid.

Mourinho's agents said he had already dealt with questions raised by tax authorities in 2015, settling issues with his 2011 and 2012 filings and reaching a settlement regarding 2013.