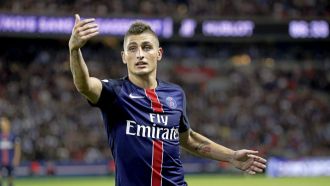 Tuesday, 20 June 2017
While a right-back might be the pressing concern for Barcelona in this summer's transfer market, those at the Catalan club are also fixated by Marco Verratti and they're ready to go all out for the Italian midfielder.

While Paris Saint-Germain have said that they won't negotiate the player's exit, the Blaugrana are not giving up.

The directors at the Camp Nou know that it will be a difficult transfer to make happen and that it will be a costly one, both in terms of the fee and the player's salary, but they are determined to bring the 24-year-old to Catalonia.

However, Verratti will have a major say in his own future as he is the one who can try to force a move away from the French capital.

That might not happen any time soon as it is early in the summer and the Italian is still enjoying a holiday in the Balearic Islands.

With no other candidates presenting themselves, Florentino Perez has won Real Madrid's presidential elections uncontested and he followed that victory up by giving a speech in which he outlined his plan for the future.

Perez called for all those at the club and involved with the club to stand together, claiming that they then cannot be beaten.

"We have built a legendary team with the best players from Spain and the world, but also with many players from our youth academy," he said of the current state of the capital city club.

"This is the model that will continue to define Real Madrid.

"When united, this club is practically indestructible."

For Perez, this is the fifth time he has been chosen to lead the institution and he insisted that it remains a great privilege.

"I know full well what it means to be president of Real Madrid, which is to secure the maximum financial strength and as many titles as possible," he told those in attendance.

"Last season was the first time in our history that the team has claimed four titles and we have been the only club able to win back-to-back Champions Leagues.

"Today I have the honour of once again assuming the presidency of this club.

"Our commitment is at the maximum and I want to express the gratitude we have had for our members throughout these years.

"The club's 115 years of existence have been possible thanks to their loyalty to the shirt.

"We have received and we continue to receive their warmth and impulse, as well as the affection of all of Real Madrid's fans in every corner of the world.

"We pass on our recognition."

Looking to the future, Perez spoke about Los Blancos' legendary status and of how he wanted to secure further glory for the members.

"Real Madrid is one of the major symbols of this sport, a legend of the feelings developed over the course of our history," he said.

"For Real Madrid, the dreams of the members are what set the course.

"We want Real Madrid to maintain our values.

"We will fight for a Real Madrid which makes history legendary."

Perez first assumed the presidency in 2000, stepping down in 2006 and then returning in 2009, holding the post ever since.

Maradona: Dani Alves is a jerk

Never one to shy away from a controversial statement, Diego Maradona has outed Dani Alves for his playing style.

Claiming that the Juventus defender gives away too many fouls for his contribution on the ball, the Argentine added a personal criticism of Alves alongside the more technical side of his argument.

"Dani Alves is a jerk, a man who plays the ball three or four times and commits eight or more fouls," Maradona remarked on TyCSports.

"Alves is always in a position of the pitch where football is not played."

"To take Aguero out of the national team for Icardi was crazy, Sampaoli does not know any more about football than [predecessor, Edgardo] Bauza, I'll tell him that much."

Milan CEO: What Real will not pay us for Donnarumma will go straight to Raiola

The ongoing friction that Gianluigi Donnarumma's decision to leave Milan has caused shows no sign of abating with Milan CEO, Marco Fassone, castigating the player's agent, Mino Raiola, for the part he has played in the saga.

It's not the first time Raiola has been placed under the microscope given his role in ensuring Paul Pogba left Juventus to join Manchester United.

"By going on as he has, Raiola has damaged Milan to the tune of 100 million euros," Fassone said to Corriere della Sera.

"What Madrid will not pay me will go to his pockets, but I would have invested in Italian football. "

Fassone denied that Milan threatened to leave Donnarumma in the stands all season if he did not renew.

"The club believes that the player is non-transferable, so he will play for Milan next season," he continued.

"Week after week too because, for me, it's possible for him to play every game as well.

"We can't risk a player just running down his contract, and maybe he is thinking about Real Madrid because should have a goalkeeper in perfect mental and physical condition."

Though it appears the players mind is made up, Fassone is confident that there will be a miracle, and Donnarumma reverses his decision.

"As a club, we will think of a thousand ways to keep him in," he said.

"And if he changed his mind, we would welcome him with open arms, the supporters too."

Mbappe: Real Madrid or no one

The immediate future of Kylian Mbappe remains undecided, but the 18-year-old does have one thing clear in his mind, which is that he will only leave Monaco this summer if it's to sign for Real Madrid.

He met with Monaco owner and president Dmitri Rybolovlev in Palma de Mallorca last Thursday and explained his intentions.

"Real Madrid or no one," the Frenchman said at one point, even if some of those closest to him, including his father, would prefer him to join Paris Saint-Germain.

For Mbappe, he pictures himself wearing the white of Real Madrid, but it remains a question of when.

The initial plan of Los Blancos' directors was to complete the signing now, but to allow Mbappe one further year at the Stade Louis II to continue maturing.

However, a potential Cristiano Ronaldo exit could bring his arrival date forward by one year.

Whatever the case, his transfer will cost at least 100 million euros, making him the club's record signing, but one who Real Madrid directors believe to be worth it.

There are clear signs of life in Barcelona's summer transfer business as their top attacking target, Ousmane Dembele, moved closer to a transfer to Spain after Blaugrana officials met the player's agent.

Contact has been made in the past between the two parties but now a 90 million euro move, which would be the most expensive in Bundesliga history, is on the table.

Sporting director Robert Fernandez and Dembele's agent Moussa Sissoko convened on the weekend to gauge a deal, according to Bild.

Already, key figures at Barcelona are talking up a deal, such as club ambassador Eric Abidal who remarked about how the winger: "Would fit in very well at the club."
Email : [email protected]
Προηγούμενο : Florentino Perez to remain Real Madrid president until 2021 | Επόμενο : Oblak: PSG consider meeting €100m clause for Atleti 'keeper
Προβολές : 450
- 3824 προηγούμενη ημέρα