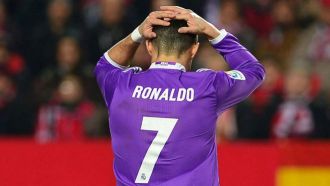 Saturday, 17 June 2017
There was shock across the footballing world on Friday with the news that Cristiano Ronaldo wants to leave Real Madrid, including in Russia, where the Portugal national team are preparing for the Confederations Cup.

The player has told his international teammates that his decision is final and that he truly will depart the Spanish capital.

"I am leaving Real Madrid," he told his Portuguese colleagues.

"I have made a decision.

"There is no turning back."

Also coming as a surprise to those in the Portugal camp was the A Bola front page from earlier in the week, which stated that an offer of 180 million euros will be made for the 32-year-old this summer.

The news that Cristiano Ronaldo wants to leave Real Madrid with immediate effect has stunned the club, and officials are now in the process of trying to calm him down so that he doesn't go.

In a conversation with those at the head of the club, Ronaldo expressed his annoyance and outrage at the treatment received regarding the complaint from the Prosecutor's Office concerning the player's alleged tax fraud.

The Portuguese newspaper 'A Bola' was responsible for announcing Ronaldo's firm decision to leave, something that has been personally communicated to Florentino Perez and Jose Angel Sanchez.

MARCA are also in a position to confirm the veracity of the story.

Ronaldo considers that he has been used as an example in an unfair and disproportionate way, when he tried to solve possible errors with his taxes voluntarily.

He has already taken the decision, but those at the Estadio Santiago Bernabeu expect that time, and the procedure of the club in the case, will calm the mood of the Portuguese and ensure he reconsiders his position.

What is also clear is that, as in other cases, Real Madrid will not hold anyone against their will.

A supposed offer of 180 million euros for the player hasn't yet reached the club but Manchester United and Paris Saint-Germain could be his possible European destinations because they are the only clubs that could afford the transfer fee and salary of the player; equal to 400 million euros.

For the moment, Real Madrid will try to stop the coup and the first thing they did was to get the public supporting the player less than 24 hours after the complaint.

Though the club are not planning for his exit, and there are no alternative plans, they could do a lot of things with 200m euros.

Real Madrid is above everyone, Cristiano Ronaldo included

The story is not new, but this time Real Madrid were surprised by the moment of happiness in which Cristiano Ronaldo announced his unilateral decision to leave. He has been responsible for annoying the club and has not been fair with them. Not at all.

Ronaldo wants to leave the team that has given him three Champions Leagues and allowed him to fight on an equal basis with Messi, the other known alien with the same habit of playing football. The Portuguese was great when he came in 2009, but he has again placed the club in a complicated situation, either if he ends up being sold or if, on the contrary, this ends with the manufacturing of a new contract that cures all evils.

Real is far above Ronaldo and any other player. Everything will continue in case he ends up leaving. In Madrid they are prepared for that moment and it's not the end of the club of course. There are plans that were in progress that will have to be accelerated if Ronaldo confirms his hasty decision.

In recent years, Florentino Perez and Jose Angel Sanchez, president and corporate CEO, have spoiled the player to the fullest. They have not lost the detail of everything that has happened and even this week the club made a public note, putting itself next to the player in a subject as personal as the treasury. Or as it did years ago when they recommended the best adviser to regularise his situation, once Mourinho and his advisers noticed how the proceedings with Hacienda were progressing.

If Ronaldo wants to leave, Real Madrid is forced to try to change his opinion, but if he seeks an improvement in his contract so that the tax fine goes to into the club accounts, the reality is that the leaders of the club should not give in to the blackmail. Real Madrid is above all, those who wear the kit or wear a tie.

Euro 2016 champions Portugal are preparing for the Confederations Cup and Cristiano Ronaldo drew all the attention during training, but remained focused despite rumours he is set to leave Real Madrid.

News of his possible departure from Los Blancos captured the attention of the Portuguese contingent and the press was eager to catch every gesture from the striker during the 15-minute session.

The media pack were looking to see what state of mind he would be in following on from Friday's events and his teammate Andre Silva spoke at a press conference about his country's star man.

"[Ronaldo] is fully focused and motivated for this tournament," he explained.

"From what I have seen he is only thinking about training and about the debut against Mexico."