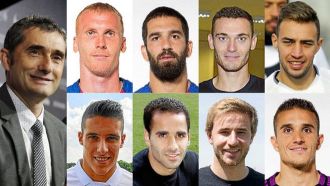 Barcelona could open the exit doors

Friday, 16 June 2017
Several Barcelona players have been playing their football away from the Camp Nou on loan in recent seasons and the club could be about to open the exit door to let them leave.

But, most importantly for a club with a rich history of producing high quality youth players thanks to La Masia, the two players who looked set for a promising career at the Camp Nou, Sergi Samper and Munir El Haddadi, have had lacklustre seasons.

The goal would be to bring both players back and to have them contribute to the team, but it is more likely for Samper to play for another mid-table LaLiga side in a bid to receive substantial playing time after playing under various coaches at Granada.

For Munir, it is evident that the striker has an abundance of individual quality, but a difficult season in a struggling Valencia side may see the player move elsewhere, with a buy-back option sure to be implemented.

Elsewhere, Thomas Vermaelen could see the exit door as the Belgian will most likely see his contract terminated despite being 2019.

The defender spent last season on-loan at AS Roma and it looks unlikely he will return to Catalonia.

Douglas spent his season at relegated Sporting Gijon and will continue to play in Europe as he seeks dual nationality, but he also won't be playing with Barcelona, similarly to Christian Tello who has been at Fiorentina and could leave for less than 10 million euros.

Depending on how much the club makes from potential sales of Arda Turan and Jeremy Matheiu, Brazilian midfielder Rafinha could also be open to offers as the player searches for minutes on the field ahead of the World Cup.

Guardiola: Johan Cruyff coaching Messi could have led to conflict

Having praised Johan Cruyff's managerial abilities several times in the past, Pep Guardiola claimed that if the Dutchman had met Lionel Messi in the dressing room, there would probably have been plenty of disagreements between them to begin with.

The Argentinian star have won 14 major trophies under the Catalan coach, who insisted that in this hypothetical scenario the former Barcelona tactician and the current Blaugrana forward would understand each other given time.

"Surely there would have been a conflict between them," he said on an event hosted by I Acto de Homenaje Amigos de Johan.

"[It would be] a conflict that we would have experienced for a while, but then they would have found each other, because the two are very intelligent.

"With Johan managing as coach and the abilities of Messi they would have won [many things] for sure."

The Manchester City coach went on to reveal that on some occasions he tries to imitate his idol's tactics and mind games to solve various issues that occur.

"When I have some problems with a player, the media or my technical team, I think what he would have done," he noted.

"It's impossible to guess, but I like to play that game, because he was the only one to solve that kind of things."

Crunch talks between Mbappe and Monaco

The future of Kylian Mbappe is set to be decided in the next few days, with the player to choose between remaining with Monaco for one more year on an improved contract, or leaving the club to join one of Europe's biggest sides.

As things stand, Real Madrid and Paris Saint-Germain are the favourites to sign the forward should he leave, but before a decision is reached his family are set to meet with the club's vice-president, Vadim Vasilyev.

Monaco are planning on presenting a new contract offer to Mbappe, which they are hopeful he will accept and continue there for another year.

With the World Cup coming up in the summer of 2018, the 18-year-old wants to play as much as possible next season.

Despite his age, this move could break the world transfer record, although Real and PSG are still reluctant to meet the asking price of 120 million euros.

Referees can stop games over discrimination

Referees at this year's Confederations Cup in Russia will have the power to abandon games over discriminatory behaviour by fans as part of a three-step procedure to promote fair-play during the tournament, governing body FIFA has said.

The procedure allows referees to halt the match and make a public announcement over discriminatory fan behaviour, temporarily suspend the game if the problem persists and completely stop the match if the behaviour does not stop.

The governing body also introduced an initiative to deploy anti-discrimination officials into the crowd to detect and report abusive behaviour.

"These are ground-breaking changes in the global fight against discrimination that will mark the 2017 edition of the FIFA Confederations Cup," FIFA President Gianni Infantino said in a statement.

"Both initiatives are extra tools for the referees and match officials to prevent discriminatory attitudes and ensure that the atmosphere in the stadium is one of fair play and respect."

FIFA had previously used observers, who are trained by the Football Against Racism in Europe (FARE) network, at the 2018 World Cup qualifiers and specific international friendlies.

The 10th edition of the Confederations Cup will kick off on June 17 with hosts Russia facing New Zealand.

Abramovich won't be a problem in Costa saga

Current Chelsea striker Diego Costa recently announced his desire to depart from Stamford Bridge, after he made public Antonio Conte's wish to sell the striker, but the Blues will not let the Spain international leave for nothing, as club owner and Russian billionaire Roman Abramovich will be keen to recuperate most of the 38 million euros he shelled out for the striker.

Abramovich will put his trust in Conte to deal with this task appropriately and the Italian coach even cancelled his holiday plans to meet the Russian in an attempt to resolve this situation.

Costa's dream of becoming a Rojiblanco once again still seems promising but it ultimately falls down to Conte, who has the backing and support of his owner as he prepares to conclude this issue ahead of his club's first training date on July 3.

If Conte agrees to sell, which is looking likely, the 28-year-old will be hoping he can leave club at the very latest date of August 6, before Chelsea face Arsenal in the Community Shield.

Conte could decide to field the striker if he has yet to leave, preventing the Brazilian-born player from joining a bridge club prior to his potential move to Atletico.

According to FIFA regulations, Costa is able to sign for three different clubs during a season, but crucially, he would only be eligible to play for two of the teams.

Both Costa and Chelsea will be looking to put an end to this saga in the coming weeks.

No 'haka' for New Zealand at the Confederations Cup

New Zealand will be unable to perform their famous 'haka' ritual ahead of kick-off at their matches in the Confederations Cup, which is set to kick-off this weekend in St Petersburg.

FIFA's particularly strict time rules prevent the All Whites from performing the dance ahead of fixtures in the competition.

"It's more of a logistical issue for FIFA as there's a very strict program before the games," said New Zealand defender Michael Boxall.

"Obviously New Zealand is very famous for it and it would be something unique and special for us, but FIFA's time limits do not allow it."

New Zealand, captained by West Ham's Winston Reid, are set to get the tournament going on Saturday as they face hosts Russia, who join Mexico and Portugal in Group A.
Email : [email protected]
Προηγούμενο : Maldini: Barcelona is the ideal destination for Verratti | Επόμενο : Cristiano Ronaldo: I'm leaving Real Madrid, there's no turning back
Προβολές : 469
- 3811 προηγούμενη ημέρα