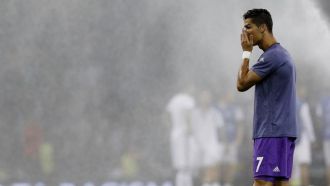 Wednesday, 14 June 2017
Antonio Lobo Xavier, one of Cristiano Ronaldo's lawyers, has responded to the Spanish prosecutor's office's charge against the player, who has been accused of defrauding the country's tax authorities of 14.7 million euros between 2011 and 2014.

Calling the case unfair, he has explained that it stems from a difference of opinion and that in 2014 the player declared his income from image rights from the previous three years because that's when he believed it should have been done.

"It has come as a complete surprise and the player feels that it is an injustice," he told Portuguese station SIC Noticias.

"There was no lack of a declaration [of income].

"There was a declaration according to criteria that apparently isn't the criteria the Spanish fiscal authorities like, but there is nothing written in law or in any rulebook that says the player broke the rules."

The lawyer also claimed that there are differences between this case and Lionel Messi's and that the 32-year-old shouldn't be held responsible as he was only following advice.

"Messi's case and those of other players the Spanish authorities have gone after are completely different because these players didn't declare anything," he said in the interview.

"Ronaldo, before suddenly being investigated, declared the part which he thought he had to."

Finally, Lobo Xavier suggested that a case is being brought against his client now because there was a need to do something or else the time for taking action would have expired.

"The timeframe in which it was possible to intervene was almost up," he pointed out.

"In this environment, with processes having been opened against players in Catalonia and with the Spanish tax authorities threatened with a short expiration time, they might have brought this forward in order to hand the responsibility over to other entities and stages of criminal proceedings."

One other point made by Ronaldo's lawyer was the suggestion that he paid more tax using his method than he would have done had he paid the image rights income in each of the three years, instead of as one combined sum.

Verratti awaits news on his future in Formentera

As he waits a conclusive decision on where his future lies, Marco Verratti is taking things easy in Formentera on holiday.

The Italian midfielder, who has been strongly linked with a move to Barcelona recently, is awaiting news of negotiations between the Blaugrana and his current club Paris Saint-Germain.

While on holiday, the former Pescara man uploaded a video to his Instagram account of his relaxation time in the Balearic island.

A departure from PSG is a complex deal given that the club had not considered that Verratti wouldn't be part of their plans going forward.

When questioned about his teammate's future though, Brazilian defender Marquinhos claimed that he was hopeful that Verratti would remain at the Parc des Princes.

"I can't answer for him because everything depends on negotiations, and both renewals and sales of players take a long time," he told Sportv.

"I think he's going to stay. PSG aren't a selling club. We have an important project which consists of having major players."

Fans at the Stade de France paid tribute to the victims of the recent militant attacks in Manchester and London before a soccer friendly between France and England on Tuesday.

The Oasis song "Don't Look Back in Anger" rang out as the teams emerged from the tunnel, with fans holding up red and white placards to form the England flag.

The song, which was sung spontaneously in Manchester at a tribute to the victims of the attack in the northern English city last month, was performed by the musicians and choir of the French Army.

The national anthems were reversed. "La Marseillaise" was played before "God Save the Queen", with the words of both displayed on giant screens to help fans sing along.

The players from both teams then formed a circle at the centre of the pitch and a minute's silence was observed before the game started.

The two attacks in as many weeks in Manchester and London killed 30 people.

England fans sang along with the French anthem before a friendly at Wembley in November, 2015, just four days after a series of attacks by Islamist militants in and around the French capital.

For the second time in the space of a year, the player has been handed an improved contract, with the current deal including a release clause of 350 million euros.

The latest agreement highlights just how important a player those at Real Madrid expect the Spaniard to become in the coming seasons, one who can play a vital role under the guidance of coach Zinedine Zidane.

It was in fact Zidane who insisted on Asensio's return from his loan last summer, a decision that proved worthwhile throughout the 2016/17 season, wherein the youngster scored the club's first and last goals of the campaign.

Hiss growth during his first year as a Los Blancos regular has exceeded all expectations, and he has shown time and again his ability to make a difference in one of the world's best teams.

The club's hierarchy initially felt no rush to renew the player's contract, as his current deal was set to run until June 2022, but they keen to appease a player who is expected to go on to stardom in the white shirt.

Asensio signed for Real Madrid for just 3.9 million euros in December 2014 and after a year of developing with Espanyol, he has established himself as an important member of Zidane's squad

A bid has been made by Manchester United for Alvaro Morata, according to the player's agent, but it's up to Real Madrid now as to whether they accept that offer or not.

Issues with a lack of game time at Estadio Santiago Bernabeu appear to have pushed the Spanish forward towards the exit door and Los Blancos are now having to negotiate with interested teams.

"They are a club with great glamour, [they are] a very interesting option," Juanma Lopez told Calciomercato.

"I can say that their proposal is a very, very important one and now the decision rests with Real.

Morata has spoken out against a move to AC Milan but Lopez put the onus on Los Blancos, who have allegedly rejected the Serie A club's offer.

"Yes, there was frequent contact with us until a few days ago, I can confirm that," added the agent. "Quite simply, Real Madrid considered the Rossoneri's offer to be unsatisfactory."

Cerezo: Griezmann negotiations were like all others, one asks and one gives

Atletico Madrid have announced the extension of Antoine Griezmann's contract until June 2022, although the president of the club Enrique Cerezo refused to go into too much detail regarding the negotiation process.

He did say that there was nothing unusual about the discussions and told reporters how happy he was.

"[The negotiations] were like all others, one asks and the other gives," he told the media at the 'Justice and Sport' event, organised by Libertad Digital, in Madrid.

"I've always said that he would stay and that's how it is, as he has extended his contract and we are all happy, both him and ourselves."

Going on to answer questions on a potential Diego Costa arrival, the president of Atleti referred to the transfer ban that the club is under and which prevents Diego Simeone's team from registering players until 2018.

"We appreciate [Costa's] words, but we cannot sign [players] until January," he said.

"We don't even dare to pronounce it to avoid receiving further sanctions."

Costa had revealed that he is no longer wanted at Chelsea and that a return to the Spanish capital was a possibility.
Email : [email protected]
Προηγούμενο : James' silence | Επόμενο : Maldini: Barcelona is the ideal destination for Verratti
Προβολές : 428
- 3799 προηγούμενη ημέρα