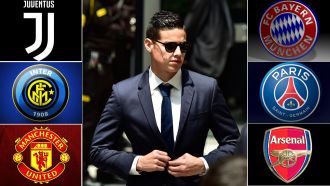 Friday, 09 June 2017
James Rodriguez's departure from Real Madrid this summer is as good as guaranteed, however, where he will be playing next season is not as certain.

Not yet 26, the Colombian can still command a big fee, and his future will be one of the most discussed topics in this transfer window, but what clubs can actually afford to sign the player?

As things stand, Paris Saint-Germain are favourites, with France Football reporting that the Ligue 1 side will go all out to lure Rodriguez to France as their star summer signing.

That said, PSG are aware that they will face stiff competition to agree terms with the player.

One factor that favours PSG though is that the Colombian has already spent a year playing in France with Monaco and is comfortable with the league and lifestyle in the country.

Furthermore, Real Madrid and the Parisiens are on good terms, not to mention that Rodriguez's agent, Jorge Mendes, is known to work closely with the Parc des Princes side.

Carlo Ancelotti's Bayern Munich are another option that the 25-year-old could explore.

In his season working under the Italian at the Estadio Santiago Bernabeu, Rodriguez scored 17 times and enjoyed arguably his best form in white.

Manchester United in England are also thought to be interested and can offer Champions League football as well, while Arsenal also dream of seeing the player in the Emirates Stadium but a move to North London remains unlikely.

Meanwhile, Luciano Spalletti at Inter is an admirer of the player's talents and the club's Chinese owners would be open to the idea of making him the jewel in their crown, though their inability to offer European football leaves them as outsiders.

Barcelona attacker Lionel Messi has praised Cristiano Ronaldo, while also stating that he would like to stay at the Blaugrana until the end of his career.

The Ronaldo-Messi rivalry has been amplified since the Portuguese's move to Real Madrid in 200, with the duo having won the past nine Ballon d'Ors between them, and Messi has commended the 32-year-old for his continued brilliance.

"[The rivalry] is reinforced by the press, not by us," Messi told ESPN.

"We try to achieve the best every year for our team and what is said outside of that I don't think is very important.

"He is a phenomenal player with a lot of quality, who outdoes himself each year.

"The entire world knows, and that is why he is one of the best of the world."

The 29-year-old was also adamant that he wants to remain in Catalonia, and it appears that a contract renewal is nearing completion.

"I said that I would like to end my career in Barcelona, and we will see if it ends that way."

Argentina will face Brazil in a friendly on Friday night at Melbourne Cricket Ground, and Messi spoke about the disappointment they have suffered in recent finals.

"We were close to victory on three occasions [once in the World Cup final, twice in the Copa America final] but we lost due to small details," he followed on.

"I believe that, in the key moments, we didn't have the luck to become champions.

"It is not easy to stand up after losing a final and we did it, reaching two more."

Messi can not only play in this Argentina friendly, but can also take part in their upcoming World Cup qualifiers after his suspension was overturned on appeal.

Zidane will only sign Mbappe if Bale leaves Real Madrid

Fitting Galactico signings into the Real Madrid team is a common problem for Los Blancos coaches and Zinedine Zidane is finding that, if he is to bring in Kylian Mbappe, another big name star may have to go.

Discussions between the French tactician and club president Florentino Perez are ongoing and both rate the Monaco starlet as Europe's most exciting young player, whose signing for another club would represent a big blow to their ambitions.

However, with Cristiano Ronaldo, Karim Benzema and more all firmly embedded within the Real system, Zidane knows that he would likely have to sell Gareth Bale to find a spot for Mbappe.

The coach feels that it would be Bale who would feel the young winger's arrival more than his striking comrades, while any risk to Marco Asensio's progression would be another negative as Zidane has made a large bet on the 21-year-old coming good in years to come.

In addition, Monaco are hoping to make Mbappe the most expensive player in world football when they do come to sell him, meaning that Madrid must get it right if they are to pay up.

One option might be to agree a mammoth deal with the Ligue 1 side now, on the basis that the player won't move to Spain until the summer of 2018.

That would guarantee Mbappe consistent game time in a year leading up to a World Cup and ensure that no rivals can gazump Los Blancos in their pursuit of the best talents going.

Of course, that would mean Bale leaving in 12 months time, a reality more palatable than a current sale given that the Welshman is settled and happy in LaLiga for the time being.

No firm decision has been made by Zidane or Perez but this saga is to continue to brew over the transfer window as a number of big clubs plot a raid on the principality to secure Mbappe's signature.

One of the biggest names who could be on the move during the summer transfer window is Iker Casillas, who has offers on the table to return to LaLiga.

The Spain international has received several proposals from teams in Spain, although he has always made it clear that he would not play for any other side in his home country other than Real Madrid.

Sevilla, Las Palmas, Real Sociedad and Malaga have all attempted to convince Casillas to change that way of thinking this summer, although the goalkeeper's intent is to play for a team who have secured European football.

The player himself is currently looking at options which are available to him in Italy, England and France.

At present, he isn't considering the offers he has received from Major League Soccer and has already ruled out two firm proposals from teams in Turkey.

Despite being 36 years old, he is still good enough to play at the top level and wants to do so, with last season's statistics backing that up.

Porto conceded just 19 league goals, with only Benfica (18) conceding fewer and Casillas shipped just 16 of those, as he watched the 3-1 defeat against Moreirense in the final game from the bench.

He was a regular and star performer for Porto throughout the season and kept 19 clean sheets in the 33 league games that he played in.

The decision of Chelsea coach Antonio Conte to part company with striker Diego Costa during the summer surprised the player, and to a certain extent the club's board.

Everyone believed that the obvious differences between the pair had been patched up and that they were a thing of the past, but it is clear that this wasn't the case.

Meanwhile, Conte's decision will have been greeted with delight at the Estadio Vicente Calderon and more specifically by Diego Simeone.

The Italian has never forgotten the clashes he had with the polarising forward during the season, despite other members of the squad pleading with the coach to forgive the Spain international.

Another thing that has riled the former Juventus boss, who is eyeing Romelu Lukaku and others as reinforcements to replace Costa, has been the constant speculation around the player's future.

During the January transfer window, he had his sights set on a potential move to China, but Conte was even more upset over a dinner that Costa had with Diego Simeone in November of 2016.

In that meeting, an agreement in principle was struck between the parties that Costa would one day return to play under the Argentine, without deciding on a specific time.

If it wasn't for FIFA's transfer sanction, that moment could be now, but it seems unlikely that Costa would sit on the sidelines for six months before making his Atletico return official in January.

Simeone would, of course, welcome him with open arms and the player knows this.

In any case, Costa wants to wait and listen to the official decision of the Chelsea hierarchy before making a firm decision on his future.

The announcement has surprised everyone, including the striker, who had been looking forward to playing for the London club in the Champions League, which now seems impossible.