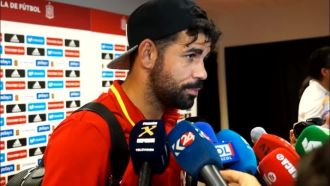 Diego Costa: Conte has told me that I'm not wanted at Chelsea

Thursday, 08 June 2017
At times, Diego Costa's relationship with Antonio Conte has appeared rather strained and now the Chelsea man has confessed that his club boss doesn't expect him to be at the Premier League champions next season.

A January falling out between the pair erupted over a potential move to China and yet the Spanish striker ended the year as the Chelsea top scorer.

"My relationship with the coach has been bad this season and it is clear that he does not want me on the team," Costa said after Spain's draw with Colombia. "I guess I have had such a bad season that I can't continue.

"Right now I'm a Chelsea player because I have a contract, but the coach does not want me there. I have to find a new team."

Whether or not that team will be Atletico Madrid may be down to Costa's willingness to spend the remainder of 2017 on loan or on the sidelines, given the capital club's transfer ban.

"Five months without playing? I do not know, it's complicated," he admitted. "But people know that I love Atletico a lot and that I love living in Madrid.

"It would be nice to go back, but it's difficult to go four or five months without playing and it's a World Cup year.

Few players could break the perfect relationship between Zinedine Zidane and his Real Madrid squad last season, and yet one of those considered disruptive to the Merengues' cause is still admired by his coach.

While working relations with Pepe broke down ahead of the defender's imminent departure, there is still hope that James Rodriguez will stick around despite the Colombian kicking up a fuss over game time.

Since the season's end, Zidane and club president Florentino Perez have had time to consider how the playing staff may change before the new campaign and the Frenchman would ideally have the same squad available to him.

However, he recognises that Rodriguez's ideal role simply isn't available to the Colombian in Madrid and that he could leave despite Zidane considering him vital to the LaLiga title winning 'B' side.

Also on the way out is Mariano while doubts remain over Alvaro Morata's future.

Just like last summer, the Blancos boss wants to shun big statement moves, for example David De Gea's touted arrival, that could disrupt the harmony within the group and instead introduce young, hungry players such as Marcos Llorente, Theo Hernandez and Jesus Vallejo.

Therefore Zidane is to wait and see what happens with Rodriguez and Morata, doing everything possible to prevent their exit but aware that they'll need replacing if they do opt for a crack at first-team football in pastures new.

Navas, Theo Hernandez and Morata: Zidane makes his requests for next season

As the focus turns to the summer transfer market and how Zinedine Zidane would like to adjust his squad, we bring you the key areas of focus for the Real Madrid coach.

"You are my goalkeeper, Keylor," were the words of Zidane to Keylor Navas as well as president Florentino Perez after the Champions League final. The Costa Rican hit top form in the run-in and departed for international duty happy with the backing of his boss and teammates, as well as the three-years left on his contract in the capital.

Sticking around whether or not David De Gea arrives, it's clear that Zidane would rather Los Blancos not splash 75 million euros on a goalkeeper when he's happy with his current custodian. That said, there are plenty in the Madrid boardroom who have considered the Manchester United man's arrival as a mere formality for some time.

After the Champions League final, Alvaro Morata's future remained somewhat unclear as the keen interest from the Premier League was not so readily dismissed as the supposed Italian bids were. For Zidane, he'd like the Spaniard to stay put but recognises the possible agitation over game time.

If Morata is to leave, another striker must be signed as the coach likes Mariano but not enough to make him first back-up to Karim Benzema. The young forward will likely leave on a permanent deal with repurchase clause, regardless of if Morata believes his impressive goal return last season made up for a lack of action.

Theo Hernandez and Marcos Llorente in at the deep end

Two stars of Alaves' squad in 2016/17 are to arrive at the Bernabeu to fight for first-team places, with Theo Hernandez's capture from Atletico Madrid to be confirmed at a slightly higher price than the defender's 24 million euro release clause. He'll replace Fabio Coentrao as Marcelo's back-up at left-back.

Joining the youngster in the senior side is returning loanee Marcos Llorente, who Zidane wants to form part of his periphery from the start of pre-season, chiefly covering for Casemiro.

Vallejo to get a chance

Real will closely watch Jesus Vallejo's progress at the Under-21 European Championship this summer after a positive loan stint with Eintracht Frankfurt. If the defender impresses in Poland and on the club's subsequent pre-season tour of America, Zidane should install him as fourth-choice centre-back, replacing Pepe.

Heading out of the Real exit door this summer is set to be James Rodriguez, who Zidane feels is some way off the likes of Isco and Marco Asensio in his pecking order. The coach knows how his 4-3-3 system is to the Colombian's detriment and Rodriguez's departure could even allow for the signing of another midfielder to rival Gareth Bale.

Real Madrid will not sign De Gea this summer

David de Gea will not be making a move to Real Madrid in the summer of 2017, it has been confirmed.

Those in charge at the Estadio Santiago Bernabeu are placing their faith in Keylor Navas and will not be forking out the 75 million euros that Manchester United were demanding.

Keylor Navas produced an excellent final two months of the season and Zinedine Zidane has asked for the Costa Rican to continue, while the players also requested that he be allowed to stay.

Kiko Casilla should remain as the backup, while Luca Zidane could be the third goalkeeper given that Ruben Yanez is ready to move away for more playing time.

As for Gianluigi Donnarumma, who has been offered to the club, Real Madrid will be patient and see how that situation develops.

The 18-year-old Italian has rejected contract renewal offers from AC Milan and his deal expires in one year.

Morata: James Rodriguez and I will be teammates next year

After scoring the equalising goal for Spain against Colombia, Real Madrid's Alvaro Morata insisted that he and James Rodriguez will remain teammates next season.

James, who impressed against La Roja, is widely expected to leave Real in the summer while Morata himself has been linked with the likes of Manchester United and AC Milan.

"He is a great player," Morata said of the Colombian to Tele 5.

"I am sure we will be partners next year."

Morata had joined up with Julen Lopetegui's squad a day earlier than planned after the Champions League triumph, and admits that playing with Spain is always something he is keen to do.

"You always want to come and play with Spain," he said.

"Unless I have a serious injury I always want to come."

Saving La Roja with a late header, Morata seemed happy with the team's performance, and thinks they could have won it late on.

"We had them in the last few minutes," he continued.

"It was an escape but we are happy because this could have been a match of the last eight in a World Cup.

"We are two national teams with great passion for playing for our country."

Pep Guardiola to return to the Camp Nou

Five years after his departure from Barcelona, Pep Guardiola, is set for another outing at the Camp Nou for an event marking the 25th anniversary of the Blaugrana's first European Cup in 1992.

The current Manchester City coach will be back on the pitch alongside his former colleagues Jose Mari Bakero, Ronald Koeman and Hristo Stoichkov, in an exhibition game against a Benfica team from that era.

The celebrations will be held on Saturday at 22:00 CET, with the Catalan club also announcing that there will be an audiovisual show to recall moments of the anniversary.

The final that is regarded as the springboard for Los Cules' European success took place on May 20, 1992, against Sampdoria at Wembley Stadium and was decided by Koeman's late goal in extra-time.
Email : [email protected]
Προηγούμενο : Modric: When Real Madrid play like this nobody can stop us | Επόμενο : Who will sign James Rodriguez?
Προβολές : 473
- 3717 προηγούμενη ημέρα