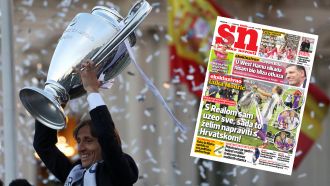 Modric: When Real Madrid play like this nobody can stop us

Tuesday, 06 June 2017
Real Madrid are an unbeatable force when they hit their top gear, according to midfielder Luka Modric.

It added to the LaLiga title that was secured prior to that success and Modric was delighted with the form his team have shown.

"Many times now I've heard people say that in Cardiff we did something really great [among Real's best ever wins] but I'm not the one to ask about that, mainly because of the enormous respect I have for the legends who have played for this club," Modric told Sportske Novosti.

"The people who have witnessed those players and times can talk about it but I just feel very happy and proud to be a part of this Real Madrid side, doing the double after 59 years.

"Honestly, I'm not even aware of the scale of this success. When everything calms down, I'll probably be able to appreciate what we have achieved more.

"The second half was the best 45 minutes of a great season. I enjoyed it enormously. When Madrid plays like that, nobody can stop us."

Modric admitted that his achievements at Los Blancos have wildly surpassed his expectations since signing from Tottenham Hotspur five years ago and he is still coming to terms with it.

"After the final, I spent an hour in bed thinking about everything that has happened to me since arriving in 2012," continued the midfielder.

"When I came here, I believed that I would win titles because this is Madrid and that is expected but not in my wildest dreams could I have imagined what [Cristiano] Ronaldo, [Sergio] Ramos, [Keylor] Navas and I are doing at 31 or 32 years of age.

"Then there are younger members of the squad who are 10 years or even more younger than us, which means that Real can continue on this path of domination. Everything is so magical."

Mourinho: Super Cup an honour to face the best side in Europe

One of the perks of winning the Europa League is a single 90 minute match with yet another major trophy at stake, and Jose Mourinho is looking forward to the privilege of facing old club Real Madrid in the UEFA Super Cup.

Not only will the clash represent the Portuguese tactician's first crack at Los Blancos since leaving in 2013, but also a chance to lift one of the trophies that has evaded his reach in his career thus far.

"It's an honour," the Manchester United coach told reporters in Lisbon while on an academic visit.

"Any team that wins the Europa League should feel honoured to have the opportunity to take on the best team in Europe, which is the Champions League winner."

Preparing for the Premier League and Champions League, as well as the Super Cup game on August 9, occupies Mourinho's mind at present and there are some big friendlies planned for the Red Devils.

"Entering the Champions League is a new thing for many of our players," he continued.

"Our pre-season will be interesting, with friendlies against Barcelona and Manchester City before the Super Cup in August."

Zidane is already 'The Best' and surpasses Guardiola and Mourinho

In just 512 days Zinedine Zidane has turned Real Madrid around, winning two Champions Leagues and a LaLiga title in his first year and a half in the dugout of the Estadio Santiago Bernabeu - not to mention the UEFA Super Cup and Club World Cup successes.

That means the Frenchman has already equalled the European Cup tallies of two of the other highest-rated coaches in world football, Pep Guardiola and Jose Mourinho.

In 17 months he already has as many Champions League medals in his pocket as the Portuguese coach - who has been managing for 15 years - and as the Catalan coach - who now has nine seasons of coaching experience.

Already he left his mark on Real Madrid as a player, by helping them towards their ninth European Cup with his volley in Glasgow, but now he is having just as great an impact from the sidelines.

What he has achieved this season makes him the best coach at the moment and it is near impossible that he won't this time win FIFA's award as 'The Best' coach in football, one he lost out on to Claudio Ranieri last time around.

His management of his dressing room has been exemplary, having made the majority feel important and having convinced Cristiano Ronaldo to save himself for the end of the season, the results of which were evident in Cardiff.

A decade after his arrival, Pepe is set to leave Real Madrid and sign a two-year contract with Paris Saint-Germain, who made a recent push to convince the veteran centre-back.

The defender was on the brink of joining Inter after his negotiations with the French giants had stalled, but Unai Emery's recent intervention led Pepe to change his decision.

Earlier in the year, the 34-year-old had considered a move to Hebei Fortune, of the Chinese Super League, who were offering a succulent salary.

However, Pepe came to the conclusion that going to China would dampen his chances of being called up for the 2018 World Cup, so he ended up dismissing that possibility.

As Real Madrid never offered the two-year deal he was hoping for, the ex-Porto star was approached by PSG and several Premier League sides.

Subsequently, Inter burst onto the scene and became the favourites to land the prized free agent, until Emery convinced the French board that Pepe could be a crucial contributor for his defence.

The pact was reached in Cardiff during a meeting between agent Jorge Mendes and PSG owner Nasser Al Khelaifi, which MARCA revealed.

Provided the Portuguese signs the paperwork, he will play his home matches next season at Parc des Princes.

In Barcelona to mark the 25th anniversary of the 1992 Champions League win over Sampdoria at Wembley, Ronald Koeman was happy to praise the current European champions Real Madrid.

Koeman joined a range of former Blaugrana players at a golf tournament at El Muntanya organised by the Johan Cruyff Foundation, where he admitted Madrid's superiority in Europe.

"Real Madrid are the champions," Koeman said. "They have been the best team in the Champions League this season and they played an excellent second half against Juventus in the final."

The Everton boss stopped short of saying they were the best to ever win the Champions League, playing down comparisons with Pep Guardiola's Barcelona side.

"I don't think they can be compared with the Barcelona of Pep," he added.

"That was an excellent team."

Also taking a question on his former club's current coach, the Dutchman admitted he was never contacted about the possibility of taking over at the Camp Nou.

"What do you want me to tell you about [Ernesto] Valverde?" said Koeman.

"No one from Barcelona contacted me to be coach."
Email : [email protected]
Προηγούμενο : Zidane: The key is that the players get annoyed | Επόμενο : Diego Costa: Conte has told me that I'm not wanted at Chelsea
Προβολές : 475
- 3685 προηγούμενη ημέρα