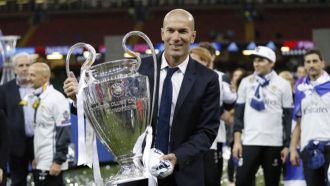 Zidane: The key is that the players get annoyed

Sunday, 04 June 2017
After lifting the Champions League for the second year in a row, Zinedine Zidane let in on some of his secrets.

While not over indulged on a tactical level, the Real Madrid boss has been lauded for his man management techniques.

"It has been a spectacular year, that you only dream of," he told reporters. "We won LaLiga and the Champions League. It is hard to reach finals. We are playing good teams as well, and we were clearly superior in the second half, and we won the game physically and with a certain determination

"Everyone in the squad has felt important, they get along together well. They have connection and when you achieve things it is easier, but it is a lot of work. But, above all, the key is that all players get annoyed. It is a key component in success."

The Frenchman was then quizzed on exactly why he chose not to start Gareth Bale in his hometown final.

"Bale was with us which was the most important," said Zidane. "I had to choose which players to start and I was correct with the starting XI. We are going to enjoy our achievements and then rest. Then we will see what happens next year.

"I don't want to say I am a very good coach, before I was terribly bad. I love football and I have the chance to be at this club."

After a strong first half from Juventus, Los Blancos came roaring out in the second half and rounded the display off with a 4-1 thumping.

"The first half was more balanced," admitted Zidane. "Juventus came out and were strong. We didn't have possession we would have liked and in the second half we were superior

"I told them to keep doing what you're doing and but play a little more with the ball. We know how to play football, when we played the second half it looked spectacular. To score four goals against Juve was not easy to do."

Attention has naturally turned to how long Zidane can keep this form up whilst in charge of Real.

"I'm not going to confirm I'll stay all my life, I'm happy and grateful to the club for being able to coach these players", he said.

"I think I will be here next year. I want to enjoy this year first.

"I feel like dancing. I owe everything to the club. I am a man of the house, this club is in my heart.

"The first thing I think of is it was lot of work, we have lots of talent but it was lots of work. If you think you can achieve things by working hard then you can do it. I feel very proud of the players.

"Everyone has bought a little to the team and that is something no one can change, and the reason behind our success."

Florentino Perez was effusive in his praise for Zinedine Zidane after the Frenchman led Real Madrid to a second-consecutive Champions League win on Saturday night.

"He is someone who all Madrid supporters have to thank, he took us to another level in 2001 and he's given us an exhibition," he said. "He's been here for 17 months and in 17 months he has done everything.

"We are very happy, we've won, we played well. I don't know where to start, the players, the manager, the supporters, the way the Juventus fans behaved."

Ronaldo was in electric form and opened the scoring on 20 minutes with a well taken finish, with another of his stand-out performances this season that are likely to earn him the Ballon d'Or for the 2016/17 campaign.

"There is no one who deserves it more than Cristiano [Ronaldo]," Perez said.

When asked about Zidane's refusal to discuss his future, Perez explained: "He says this to free himself of the pressure that goes comes with talk of contract renewals.

"He said that he hadn't won anything and he has won it all.

"We'll speak to Zidane, he is the leader of the orchestra, and there won't be any problems at all."

While Los Blancos' back-to-back Champions League-winning squad may feel untouchable after Saturday night's victory, speculation is sure to resume surrounding David De Gea and the Spanish stopper's proposed move to the Bernabeu.

"De Gea is a great goalkeeper who plays for [Manchester] United," Perez said, "I don't know where he will be next season because I'm not a fortune-teller."

Sergio Ramos lifted his third Champions League trophy in Cardiff, and Perez highlighted the importance of the captain in what Madrid have achieved in recent seasons.

"He has behaved like a true leader," he said. "He's been the link between all the players. A completely united squad - those who have played and those who haven't - there's been an understanding with the supporters and that has had a lot to do with Ramos.

"He is a true captain, him and Cristiano have led the squad to believe that everything is possible, we have to thank them and the captains."

Morata: Back to Italy? Certainly not, I want to stay at Real Madrid

While a switch to England wasn't discussed, the Spaniard put his cards on the table in terms of preferring a stay in Madrid.

"Back in Italy? It's difficult. Certainly not. I want to stay at Real Madrid," he told reporters.

"I like Italy, but Madrid is my city and this is my team, and Juve is my second team."

Heavily linked with a return to Italy to join AC Milan, Morata had earlier stated that his future, be it in Madrid or elsewhere, is not in his hands.

"Staying does not depend on me," Morata said. "Right now I only want to celebrate our Champions League win.

"We are a squad. If I was an individual player then I would play tennis."

When pushed on the subject and asked about his short-term future, the forward insisted that he was looking ahead to the upcoming international matches.

"We have matches with Spain," he added. "It's going to be a lovely summer."

Determined to stress his happiness of the win over Juventus, Morata said it would be selfish for him to be unhappy with the season.

"I cannot be disappointed, we have just won the Champions League," he exclaimed. "It would be selfish for me to be unhappy.

"For me to return to Real Madrid and win the Champions League is incredible."

In a season and a half on the Real Madrid bench, Zinedine Zidane has made history by becoming the first coach to successfully defend the Champions League.

This achievement becomes all the more astounding when you take into account that this is his first full season in charge of any senior club.

From January 9 2016 to June 3 2017, the Frenchman has won two Champions Leagues, one LaLiga title, one UEFA Super Cup and one Club World Cup, putting Los Blancos back at the forefront of world football.

Zidane has created his own style along the way and has rotated the squad brilliantly to keep every player feeling involved and switched on. His approach has earned him a number of plaudits already and his man-management of one of the world's most star-studded squads has people comparing him with the game's great coaches.

Without any doubt, the greatest achievement of Zidane's so far has been his management of Cristiano Ronaldo, who he rotated when needed to make sure he was fully fit for the season's decisive moments.

In the company of some of football management's greatest names, from Jose Mourinho, Pep Guardiola and Carlo Ancelotti in recent years to Bela Guttman in the 1960s, Zidane's achievement cannot be simply overlooked and put down to the squad he has at his disposal.
Email : [email protected]
Προηγούμενο : Ramos: Real Madrid have a date with history | Επόμενο : Modric: When Real Madrid play like this nobody can stop us
Προβολές : 532
- 3729 προηγούμενη ημέρα