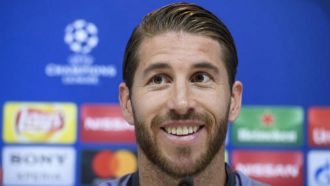 Ramos: Real Madrid have a date with history

Searching for their second successive European crown, many players of the current Blancos squad were also present for the 2014 triumph over Atletico Madrid in Lisbon.

"But the most important thing was to get here, now think about how you have done it before.

"From experience, you know how these things work. You have won the Champions League twice, for me that's the key.

"After all you've achieved, remember that there are only two teams in the final."

After overseeing his squad on Friday night and facing the press, all that's left is the final itself, which kicks off at 20:45 CET from Cardiff.

Zidane: If I'd have played with Cristiano Ronaldo, he'd have been the star

Often considered as one of the greatest players of his generation, Zinedine Zidane still doesn't feel he would outshine Cristiano Ronaldo if the two were to have played together.

In attempting to lift his second straight Champions League as a coach, the Real Madrid boss will once again be reliant on the Portuguese star producing the goods in the final.

"Cristiano is a good guy, he gets worried about the other players," Zidane told reporters in Cardiff. "What matters is what he does professionally, he wants to win more and more, he is never satisfied. It is his main contribution to the team.

"If we had played together, the star of the team would have been Ronaldo, because he is the one who scores goals."

Juventus come into Saturday's game having lost their last two finals and the Madrid coach doesn't feel like the onus is on his side any more than normal.

"We are ready and well prepared for the game," he added. "We have worked hard to get here, and have a good mindset.

"There is no pressure on us, we live with this kind of pressure all the time. You know what this club is like, we always say we are the favorites, we know it's another final, it's a winner takes all match and anything can happen. We are the favorites, and will try to do everything possible to win.

"If you told me I would have experienced these experiences, I wouldn't have believed you. I'm enjoying it, me and my players. It's an amazing experience."

"I've lost so much as a player, both teams are playing the same game. We are up against a brilliant side, we all want to see a good final and that's it."

Playing the game in Wales means that all eyes are on Gareth Bale, but the winger's lack of fitness is creating a genuine dilemma for Zidane.

"The hardest thing for me is choosing the team," he noted. "There are six players who won't even be in the team.

"It is part of my job and I will do it with a clear conscience. The are all in the same boat.

"I won't tell you who will play. Last week I said there are two players who can play together. They are all ready for the final, not just from a mental point of view, but also from a physical one.

"The motivation for the players came at the start of the season, when we get to the end of the campaign everyone should already have it. We will be changing anything we have done until today."

Brushing aside the recent dragging up of the 1998 final that Juve lost, with Zidane in the side, by Dani Alves, the Frenchman gave his take on the Bianconeri squad he'll face this Saturday.

"My thoughts and concerns are focussed on tomorrow's game," said Zidane.

"Juventus are not just a defensive side, their game is not only that, they attack well too and have very good offensive players. Juve always have great teams, and maybe they are better now than they were in the past."

Ramos: Real Madrid have a date with history

No team has won the Champions League in its current format on consecutive occasions and Sergio Ramos believes Real Madrid are destined to do so in 2017.

Juventus stand in Los Merengues' way and the club captain has stated that his team have experience in doing all it takes to win.

"Our club and badge demand it. We have a distinct aura and our history speaks for itself, which is no accident.

"We have a date with the history, but we must forget the records of each team. We have to think as if it were the first title we could ever win. We are very motivated and want to win our second in a row."

Asked whether or not winning LaLiga just weeks before the final in Cardiff will have any bearing, Ramos was clear that both teams go into the game as equals.

"Both teams start at zero," he insisted. "Winning LaLiga doesn't change anything, even though we finally did it.

"We are very pleased., the team is a unit and wants to win tomorrow. It will be a tough game, but we start with a 50 percent chance of winning."

With a reputation for scoring late goals, the centre-back reiterated how he feels that Real need to maintain their never-say-die attitude into the final knockings of the season.

"I don't live in the past, but our spirit forces us to fight until the very end and, until the referee blows his whistle, things can be changed," said Ramos.

"I have worked with [Zinedine] Zidane for a long time, and we are accustomed to finals. The coach is a Real icon and our bench is brilliant. I hope he stays for a long time, for us he is crucial.

"We have played many finals, and this gets into the opponents heads. We'll give everything on the field, we want to go out with a our heads held high."

For much of the past half-decade, Juventus have strongly coveted Isco, whom the Bianconeri will have to guard carefully if they want to win the Champions League final.

The Turin-based club were closely monitoring the Spanish international's footsteps five years ago, but Malaga set a 35 million euro release clause as soon as the local product began to shine on the pitch.

"Isco is not on the market, we want him to remain here," said Mario Husillos, the Andalusians' sporting director at the time.

Merely a year later, Real Madrid did not hesitate to pay the hefty sum to sign the rising star.

In 2014, when Massimiliano Allegri took over as new coach, the presumed interest of the Old Lady in Isco became public.

"Juventus will need to evolve without [Andrea] Pirlo," Allegri said. "I would like to sign a creative and flashy player who provides stability to our squad, such as Isco from [Real] Madrid."

The lack of a prominent role in the Spanish capital prompted the 25-year-old to consider leaving the reigning European champions during the 2016 summer transfer market.

In fact, Isco's dad and agent confirmed the Italian giants had inquired about the situation.

"Yes, Juventus are interested but they haven't submitted an official offer," he continued. "My son wants to stay at Real, one of the biggest clubs in the world."

On Saturday, Allegri's player will seek to deactivate their age old obsession.

"With [Gareth] Bale they are faster, but Isco gives Madrid an extra dose of fantasy," Allegri stated.

Allegri: Juventus must believe we can win the Champions League

Belief is the most important factor for Juventus in the Champions League final, according to coach Massimiliano Allegri.

He and his players were beaten finalists two years ago at the hands of Barcelona, although they have the chance to right those wrongs against Real Madrid.

Although he has yet to make a final decision on his line-up, the Italian insisted that all players are aware of what he wants from them.

"I haven't yet decided on my starting XI, the match can last for 90 minutes or 120 and the formation can change a lot, so we have to think about these changes - the whole bench is going to be decisive," Allegri told the media.

"In 2015, we didn't have the same conviction as we do now. This year is different. Our approach to games is different. We have improved a lot. We have been working all year long for this, the season's wins were only a training session."

Although Gareth Bale isn't expected to get the nod in his hometown final from the start, that likely won't upset Allegri too much, as he pinpointed weaknesses that can be exploited without him in the side.

"If Bale plays, he goes wide," he continued. "If Isco does it is different, he is not predictable, but makes them more disorganised in defensive areas."

The game has been pinpointed by some observers as a battle of the best defence against an unstoppable attack, although the former Milan boss doesn't view it quite like that and gave his take on the comparisons between Paulo Dybala and Lionel Messi.

"Statistics don't matter in tomorrow's game, apart from the technical and tactical phases of play, we have to perform well," he added.

"It is a journey for Dybala to play in a final as this doesn't always happen. On Saturday, we have to win, and have the right mentality."
Email : [email protected]
Προηγούμενο : «Ήρθε η ώρα μας!» | Επόμενο : Zidane: The key is that the players get annoyed
Προβολές : 527
- 26 προηγούμενη ημέρα