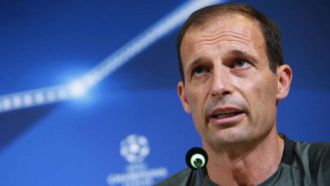 Allegri: I don't think it's right to make Juve favourites and I don't like it

Tuesday, 30 May 2017
Real Madrid and Juventus will meet in Cardiff on June 3 to contest the final of the Champions League, a long sought-after prize for Massimiliano Allegri's side, but the coach of the Italian club is not comfortable with his squad being branded as pre-match favourites.

Following a comfortable semi-final victory against Monaco many believe that the defensive solidity of the Bianconeri, partnered with the lethal finishing of ex-Los Blancos striker Gonzalo Higuain, could be too much for a Cristiano Ronaldo driven Real Madrid to handle - but Allegri isn't so outwardly positive.

"We have to be calm. The optimism is good in the media, but I don't think that it is right to give us the tag of favourites," Allegri explained in his pre-final press conference.

"We are playing our second final in three years and we are used to playing them, but Real Madrid are in the same position.

"I don't like it. They are a very strong team and we have to respect them a lot.

"Our form is great and we deserve it, and we are more secure and convinced of our chances than two years ago against Barcelona."

Plenty has been made of Real Madrid's front three, known as BBC in the media, but Allegri believes that his own combination of players can have a big effect on Saturday.

"BBC? It could also be Buffon, Bonucci and Chiellini," he continued.

"The smaller details are going to make the difference in the final and I believe in our possibilities to win but without forgetting what Real Madrid will bring to the game.

"My players are extraordinary, but I am asking them for even more.

"This team has improved a lot and we can't be anxious. We have to be calm and with balance we can win."

Allegri believes that previously lost finals won't spring to mind this weekend, with Gonzalo Higuain and Paulo Dybala set to be key forces.

"The finals we lost are there, but it is something extraordinary because we had to be there in the first place," he said.

"It is obvious that it would have been better to win, but to be there is important.

"Negativity is bad, and you can take positive things from all of these finals. In any game, you have to play well and be lucky.

"The Champions League has a presence and reputation that is known throughout all of the world. It is like a Super Bowl, there is nothing like it.

"Dybala and Higuain took a while to get to know how to play together, but they are now doing it well and can both score.

"Real Madrid have grown a lot and I have to congratulate Zidane. They have a lot of balance.

"Casemiro gives a lot of this on the pitch. With Isco, they control the game more, and with Bale they have more pace - but less fantasy about them.

"What Zidane is doing isn't easy, a Champions League trophy and a final deserves credit. He is a super coach and he will continue to be one."

After Serie A club Crotone survived the relegation battle on the division's final day, their coach promised to cycle to Turin after making a promise that he would do so should his team turn their fortunes around, but Allegri made no such deals regarding Saturday's action.

"I'm not riding a bike to anywhere, because I don't like bicycles. I respect and congratulate the Crotone coach, but I'm not going anywhere on my bike," he joked

Chiellini: Isco has given some extra value to Real Madrid

After helping to drag Real Madrid towards their aims at the end of the LaLiga campaign, Isco is both the danger man that Juventus must keen an eye upon and the source of inspiration that his fans will hope for according to Giorgio Chiellini.

The experienced Italy international was keen to pick out the Spanish midfielder as a cause for concern ahead of the Champions League final that will take place on June 3 in Cardiff.

"Bale and Isco are both great players, and though we aren't only wary of those two - Isco has given them added value," Chiellini explained in a press conference preceding the big game.

"He has been a determining factor for Real Madrid in recent months. They are a team that seem to be playing well, more or less, but when you are careless that is when they hit you. They did it against Bayern.

"Attitude is going to be key in order to win the battles that will decide the game."

Chiellini was injured when Juve lost to Barcelona in 2015 and understands that a sturdy defence could be the key to Bianconeri success.

"We have five central defenders of top quality," he continued.

"We are all different and everyone has their own characteristics. They talk about Bonucci and I, but any of the others could play as a starter in any team.

"In the coming days we are going to study every detail of Real Madrid and won't leave any spaces of any type.

"We are going to limit their strikers and we'll not go out and give 100 per cent because something extra is required.

"We did it against Barcelona [in 2015] and we didn't deserve what happened."

The Juventus defender talked up his goalkeeper, the legendary Gianluigi Buffon, but refused to brand the game as Real Madrid's BBC facing off against his defensive line.

"I am lucky to have been able to play with him throughout all of my career, and perhaps for that reason I don't realise just how good he is," he is.

"Everything is simple when he is behind you. He deserves a Ballon d'Or for his career and what he has done on the pitch. If we win on Saturday, I think he will have it.??"I don't believe that it is a duel between the two 'BBCs,' but we have to keep them away from our goal. They have a very strong squad."

Facing former club Real Madrid in the Champions League final isn't a daunting challenge for Gonzalo Higuain, who is focused on the ways his current club can dismantle the 11-time winners.

The familiarity with his ex-club means the striker knows all about Sergio Ramos' late antics.

"Let's hope Ramos doesn't score in the 90th minute," he said. "I have a lot of affection for him and his family and we still send each other messages.

"Football sometimes places you in situations like this one where I'll face Real Madrid in the final.

"It'll be an evenly matched game."

In a scare for Juventus just five days ahead of their Champions League final date against Real Madrid, Gianluigi Buffon felt some discomfort and so decided not to participate in the Bianconeri's Monday afternoon training session.

The veteran goalkeeper did join his teammates on the Juventus Stadium pitch to listen to Massimiliano Allegri's short talk but then retired back to the dressing room before seeing the club physio in the gym.

Buffon is a fixture in the lineup on Saturday and nothing at this stage indicates that he will not be in Cardiff, though Juve's staff will monitor the evolution of this small problem intently.

"We have to take care of him so that he arrives like Totti at 40," the Italian press joked after learning of the news.

Iniesta: I never said I wasn't going to renew, but rather to evaluate a lot of things

The future is still up in the air for Andres Iniesta, as the iconic midfielder hasn't yet committed to signing a new Barcelona contract.

Despite everything he has done for the club, the captain wants to feel useful, and needs reassurances from the board and new coach that specific plans will be made for him since he is nearing retirement.

"I never said I wasn't going to renew my contract, but rather to evaluate a lot of different things," Iniesta clarified in a radio show with Onda Cero. "It isn't an economic matter.

"There are several factors that have joined together, personal, the moment of the season, and it hasn't been easy.

"I need to make an honest decision and one that is best for everyone."

The Manchego also took the chance to mention Barcelona's new coach Ernesto Valverde, which was made official Monday evening.

"I didn't know about Valverde until it was announced," he said. "I've talked to him a few times but not much.

"I believe he has a great support team that work hard and hopefully he has a lot of luck so we can achieve things together.

"He's had good vision at the teams he's been at thus far and this is another step for him."

The Copa del Rey win, could act as goodbye if an agreement isn't reached, but the midfielder didn't interpret the win that way.

"As I get older, I realise how difficult it is to win," he concluded. "Winning titles every year became the norm.

"I personally value this Copa del Rey a lot.

"To win only the Copa del Rey isn't a failure of a season."

It wasn't much of surprise, but president Josep Maria Bartomeu announced on Monday that Ernesto Valverde will be Barcelona's new coach.

He also used the press conference as an opportunity to comment on Sandro Rosell's recent situation, not to mention the relationship to the Joan Laporta board finances.

New coach Valverde will be presented in the next few days.

Former Athletic Bilbao coach will take charge of the La Liga runners-up on a two-year contract.

Valverde, who will be officially unveiled on Thursday, played for Barcelona as a forward between 1988 and 1990 under Johan Cruyff and is one of many of the Dutchman's former pupils to have turned to coaching upon retiring from playing.

"He loves youth football and he has the right style to coach this club and knows how the club works. He has a high work rate, he is passionate about football and interested in working with the latest technology."

As well as qualifying Athletic for Europe in five of his six years with the club, who only pick players from the Basque country, he ended a 31-year wait for a trophy by leading them to the 2015 Spanish Super Cup, beating Barcelona 5-1 on aggregate.

He also coached and played for Barca's city rivals Espanyol, reaching the 2007 UEFA Cup final while in charge although losing to Sevilla on penalties, and won three Greek league titles and two domestic Cups with Olympiakos Piraeus.

Luis Enrique rounded off his three-year tenure at Barcelona on Saturday by beating Alaves 3-1 to win the King's Cup for a third year in a row, the ninth trophy he led the club to.

Valverde will be thrown in at the deep end with his first competitive game in charge being against Barca's arch-rivals and La Liga champions Real Madrid in the first leg of the Spanish Super Cup at the Nou Camp in August.

Before then the team will go on a pre-season tour of the United States with friendlies against Real, Manchester United and Juventus.
Email : [email protected]
Προηγούμενο : Barcelona to announce new coach on Monday | Επόμενο : Who's better: Juventus or Real Madrid?
Προβολές : 550
- 3702 προηγούμενη ημέρα