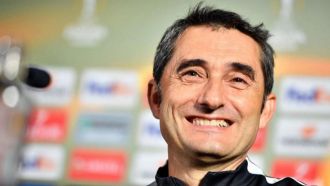 Monday, 29 May 2017
There is no time for Copa del Rey celebrations for Barcelona as thoughts are already set on the future, with Ernesto Valverde expected to be announced in a press conference on Monday.

Luis Enrique won his ninth title in just three years, but it wasn't a drawn out farewell.

The celebrations at Canaletes fountain were muted, and in fact it seemed like one of the least enjoyed titles in Blaugrana history.

Valverde has already left Athletic Club, although technical secretary Robert Fernandez insists supporters will have to wait until it is official.

"My next step will be a difficult challenge," he said.

President Josep Maria Bartomeu has already promised exciting signings, and the new coach will have to recapture the enthusiasm at the Catalan club.

Several new faces are expected, and deadweight loss will have to make way for any major signings.

For now, it all starts with the new coach, presumably Valverde, and it will all begin to unravel on Monday.

Six things Real Madrid need to be wary of against Juventus

Real Madrid become European champions for the 12th time, but there are a few things they need to be wary of.

They could become the first side to win the competition back-to-back however four teams have come close to doing it with negative results.

In 1993/94, AC Milan beat Barcelona 4-0 in the final, before losing 1-0 to Ajax the following year and Juventus were champions when they beat the Dutch side lost on penalties in 1995/96. The run continued with the Italian giants being beaten 3-1 by Borussia Dortmund 12 months later.

Since the introduction of the Club World Cup, no winner has ever lifted the Champions League trophy in the same season.

The curse of the ex-player

Former Real Madrid heroes, Gonzalo Higuain and Sami Khedira, will be in the Juventus side and desperate to beat Los Blancos.

However, Zinedine Zidane will be hoping Alvaro Morata can help overcome his old club.

Real Madrid have not won the Champions League in an odd year this century. Their last coming all the way back in 1959.

History tells you it's time for an Italian side to win it, as one has been champions every seven years - and the last was Inter Milan in 2010. Milan did it in 2003 and Juventus in 1996.

As the 'away side', Real Madrid will wear purple, and they have lost twice this season in their changed strip.

There are several coincidences that will bring Juventus bad memories ahead of June 3rd's Champions League clash against Real Madrid.

It is an identical scenario as 19 years ago, when Los Blanos emerged victorious to lift La Septima.

In 1998 in Amsterdam, Real won 1-0 on the night, and to get to the finals Juventus had to defeat Monaco in the semi-finals, just as they have had to do this season.

Back then they wore the Black and white after winning the coin toss that decided they'd wear their home kit, which will again be the case in the 2016/17 edition.

In fact, the Old Lady have never won the Champions League in their home kit, falling most recently in 1995/96 to Ajax via a penalty shoot-out while wearing blue.

Life has not gone to plan in Manchester for winger Nolito, who admitted he's anxious to return to Spain and leave City by whatever means available.

After a steady decrease in playing time, the ex-Celta man is considering his options.

"I'd like to leave Manchester City... on loan, a transfer, whichever way possible," he told MARCA. "I'm calm about my future, and though I'm on vacation, my intention is to go back to Spain.

The player's relationship with coach Pep Guardiola could be a reason for the frustration.

"Up until December I was playing and was happy, but after those four months I've hardly played," he insisted. "I don't know what happened, you'll have to ask him.

"It has been a year to forget, an experience that hasn't turned out as I'd planned, but hopefully this summer we'll find a solution."

Luis Enrique leaves with nine trophies under his arms

Victory in the Copa del Rey final made it nine trophies in his three seasons at Barcelona for Luis Enrique.

He won the domestic cup in all three seasons as well as the Champions League, La Liga twice, the FIFA Club World Cup, a UEFA Super Cup and a Spanish Super Cup.

It was a difficult start for the former Barcelona captain who, as Gerard Pique admitted "took over a club in the s***" when he followed Tata Martino.

But he steered them in the right direction and finished the season with a sensational treble.

In his second campaign, they were knocked out at the Champions League quarter-final stage by Atletico Madrid, but won the title and retained the Copa del Rey.

And, despite losing the title for the first time in his final season, there were still plenty of moments to savour.

As well as this victory over Alaves, no one will ever forget the incredible comeback against Paris Saint-Germain in the Champions League.

Varane: Mbappe has tremendous potential so he'd be welcome at Real Madrid

With the Champions League final coming up on Saturday, the 24-year-old is looking forward to joining his French national squad teammates shortly afterwards.

"[Mbappe] is a very good player with tremendous potential," Varane told TF1. "He has something that only great players have.

"I would love it if he came to Madrid, he'd be welcome in the dressing room.

"We can discuss this possibility at Clairefontaine training grounds."

Besides, the defender addressed the ongoing rift between Karim Benzema and national coach Didier Deschamps.

"Karim [Benzema] is human so he's naturally affected by this situation, but he's mentally strong and will overcome it.

"His potential return to the national team is not the players' business, but of course we could use his world class skills."

"He has been producing on the field for many years.

Totti: I'm not ready to say it's over

Roma snatched a last minute goal to give Francesco Totti the perfect goodbye, and the iconic striker was deeply moved with the show of support from fans, teammates and his coach at the Stadio Olimpico.

His playing career spanning an incredible 25 seasons - all at Roma - make him one of the most celebrated one club men of his generation.

"Unfortunately, the moment has arrived, and I thought it would never come," Totti said in a letter during his farewell ceremony. "I'm not ready to say it is over.

"It is impossible to explain 28 years in a few phrases but I'll try."

One of the moments that best summed up the emotional proceedings was when a fan climbed the fence and got by security to try and give Totti a hug when he was completing a lap of honour.

The security guards had already ushered him away, but Totti went out of his way to embrace the supporter.

"I tried to express myself through my feet, because everything seems easier that way," he continued. "So allow me to be a little afraid.

"This time I am the one who needs you and your warmth. What you've always shown me. With your affection, I will certainly be able to turn the page and throw myself into a new adventure.

"I am happy and proud to have given 28 years of my love to Roma. I love you!"
Email : [email protected]
Προηγούμενο : Luis Enrique: My future? I'm even open to changing sports | Επόμενο : Allegri: I don't think it's right to make Juve favourites and I don't like it
Προβολές : 458
- 3817 προηγούμενη ημέρα