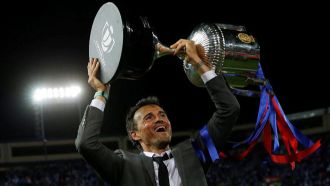 Luis Enrique: My future? I'm even open to changing sports

Sunday, 28 May 2017
Barcelona's 3-1 victory against Deportivo Alaves brought to an end Luis Enrique's time in charge at the club and the Spaniard joked that he was even willing to change sports when quizzed on his future.

Luis Enrique leaves the Camp Nou after a period of monumental success in addition to pressure in equal measure.

As with a number of former coaches an element of burnout has taken hold of the 47-year-old and as such the decision was taken mid-season to leave the club.

"I do not know what I will do in the future, I am open to any possibility, perhaps even changing sports," he explained post-match.

Enrique's departure coincides with a symbolic changing of the guard in Spanish football with Zinedine Zidane's Real Madrid appearing to be on the precipice of a period of great success whilst the Catalan giants have dominated much of the last decade.

On that subject the former Roma coach was enthused about the rivalry between the two clubs and made clear how much he enjoyed the competition with Los Blancos.

"The rivalry is healthy, it has to exist and the important thing is to be proud of your colours and give everything you can," he said.

Deportivo Alaves threatened to ruin the romantic farewell when Theo Hernandez cancelled out Lionel Messi's opening goal with a stupendously hit free-kick from distance yet goals from Neymar and Paco Alcacer handed the Blaugrana the trophy in a game that Enrique felt was very even.

"Alaves have been faithful to their style of football, in a final anything can happen and they generated a lot of danger with their direct passes, we were more interested in setting the rhythm of the match and the two goals before half-time were very important," he noted.

Whilst his relationship with journalists has been rather frosty to say the least over the past 12 months, Enrique remains loyal to his players and thanked them for giving him absolutely everything over the course of a difficult campaign.

"I can only admire their professionalism over the past three years, this title belongs to everyone and I have received one hundred percent effort from the team and I have tried to push them all to their limit, I too have given absolutely everything and nobody can question that," he concluded.

Luis Enrique maintained his lust for titles to the very end

Just like Pep Guardiola before him, Luis Enrique ended his tenure as Barcelona coach by sealing the Copa del Rey.

To suggest that the Asturian takes the competition seriously would be an understatement of the highest magnitude, as he leaves the Blaugrana having failed to lose a tie of the domestic cup competition that he's won in each of his three seasons in charge.

Setting expectations high with a first year treble, Luis Enrique was never going to be completely unbeatable in Catalonia and was forced to settle for the league and cup double in 2015/16.

After Real Madrid's LaLiga resurgence earned them the league crown in 2017, Barcelona were forced to settle for just the Copa as Luis Enrique announced his departure having already notched another Supercopa de Espana.

And for all his barbs with the press and questions over certain tactical decisions, the former midfielder can exit stage left with his head held high, and another piece of silverware under his arm.

With their victory over Deportivo Alaves on Saturday night, Barcelona only further cemented their legacy as the Copa del Rey's most successful team with the Catalan giants now allowed to keep the trophy.

Goals from Lionel Messi, Neymar and Paco Alcacer downed their Basque opponents and helped ensure another piece of silverware will be added to the club's famous trophy cabinet.

There are only two stipulations which make a team eligible to keep the trophy and those are winning it five times or winning it three times in a row.

Following their triumphs over Athletic Club and Sevilla in 2015 and 2016 respectively, the Blaugrana secured a third consecutive success in the domestic cup on Saturday.

Their 29th triumph now places the Catalan giants way ahead of both Athletic and Real Madrid who only hold 23 and 19 titles respectively.

Luis Enrique also ensured that he departs the Camp Nou with a trophy before the club officially appoint Ernesto Valverde as his successor.

Barcelona haven't won three straight Copa del Rey tournaments since the 1950s and Enrique's achievement is likely to stand the test of time.

Cristiano Ronaldo: Juve have a great defence but there is always a weakness

Still a week away from the Champions League final, Cristiano Ronaldo addressed Real Madrid's chances to successfully defend the title they conquered last year in a thrilling penalty shoot-out.

Should they defeat Juventus, Los Blancos would become the first club to win back-to-back European crowns since the inception of the current format back in the 1992/93 season.

"Every player in the [Madrid] dressing room wants to make history," Ronaldo told UEFA. "It would be a privilege to be the first team to win consecutive editions of the Champions League."

The Portuguese star is anticipating a hard-fought battle whose outcome will come down to little details.

"We are aware it will be an extremely difficult match but we are Madrid so we know we have a realistic shot at winning.

"This final will be similar to the previous ones [against Atletico Madrid], it's basically a coin flip.

"Both squads will attempt to take advantage of the opponent's mistakes; whoever plays a cleaner match should prevail, hopefully it's us.

"It will be an exciting match-up for both players and fans, we have high expectations."

"[Juventus] are an excellent team, as they proved by winning both Serie A and Coppa Italia, and they have completed a fabulous campaign in Europe.

"While Juventus certainly have a superb defence, there is always a weak spot, we need to find out how to attack it."

Ahead of their third Champions League final over the last four seasons, Ronaldo reminisced how complicated Los Blancos' path to Cardiff was.

"Winning the Champions League is always a tall order.

"We advanced from the group stage behind Borussia Dortmund but then we raised our level to knock out powerful sides such as Atletico and Bayern [Munich], so we are worthy finalists.

"The fact we are able to step up our game when it matters the most shows we are a great team."

The 32-year-old also commended Zinedine Zidane's work at the helm.

"[Zidane] has done a terrific job, he is proving his status as a world-class coach.

"I used to admire him as a player and my admiration has done nothing but grow.

"He's a positive, hard-working and respectful person, everybody in the squad is really pleased with him.

"It's not easy to manage this sort of dressing room, because every player wants to play a lot of minutes, but he's been able to spread playing time among all of us."

Moreover, the Euro 2016 champion reflected on becoming the first player to break the 100-goal barrier in the top European club competition.

"I always thought I could be the first person to reach the milestone and I'm glad I did it.

"It was one of the targets I set for myself before the season started.

"I would like to thank my teammates, coaches and fans at Madrid for aiding me, I'm extremely happy."

Lastly, Ronaldo, who has been firing on all cylinders lately, referred to his current position on the pitch.

"My position will always be the same, but Zidane is allowing me to move freely up front.

"In the previous two years I was very fatigued towards the end of the season.

"This time around, I agreed to take several matches off so that I could be in top shape in the decisive stretch of the campaign."
Email : [email protected]
Προηγούμενο : The Barcelona of the future | Επόμενο : Barcelona to announce new coach on Monday
Προβολές : 480
- 3872 προηγούμενη ημέρα