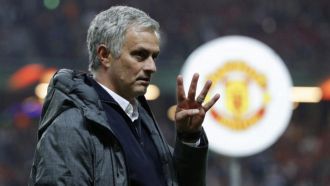 Four out of four for Mourinho in European finals

Thursday, 25 May 2017
Jose Mourinho kept up his perfect record in major European finals on Wednesday evening as Manchester United saw off Ajax at Stockholm's Friends Arena.

Not counting the UEFA Super Cup, this was his first continental final since he led Inter to Champions League glory at the Estadio Santiago Bernabeu at the end of the 2009/10 season, while he also won the UEFA Cup with Porto in 2002/03 and the Champions League with the same team the following season.

In total, it was the 17th final the Portuguese coach has won out of the 26 he has contested and the victory made him the first coach to claim two Champions League and two UEFA Cup/Europa League medals.

Mourinho also became the first ever United coach to win two major trophies in his first season at Old Trafford, with the FA Community Shield and the League Cup already having been won thanks to victories over Leicester City and Southampton at Wembley.

With this the first European trophy the Red Devils have won since 2008, Mourinho has led the English club back to continental success and booked a ticket to the 2017/18 Champions League in the process.

Mourinho: I won't discuss Griezmann as that's disrespectful to Atletico

A2-0 win over Ajax on Wednesday night sealed Manchester United's passage to the Champions League although Jose Mourinho wouldn't be drawn on whether Antoine Griezmann will also be descending upon Old Trafford next season.

Rumours of the Red Devils enacting the Atletico Madrid striker's 100 million euro release clause were said to hinge on their success in the final.

"I do not want to talk about Griezmann because that would be disrespectful to his club, Atletico," the coach said to BeIN in Stockholm. "Just how I do not like others talking about by my players, I'm not going to talk about Antoine either."

Having come under criticism for his first Premier League campaign in Lancashire, Mourinho emphasised the importance of ending the season on a high note.

"It meant a lot," he added. "It means playing in the Champions League, winning our third title and winning a cup that this club had not won.

"United, as a club, are at the highest level, but the team has lived through difficult times in the last three years. We are under construction, but there is no better way to build a team than to win.

"We return to the Champions League, but not as favourites. We return by winning a title, an important title, it's better than finishing fourth, third or second."

Ahead of the Europa League final between Manchester United and Ajax in Stockholm, a curious image emerged as collected by Colpisa's Rodrigo Errasti; a Red Devils supporter wearing a Griezmann jersey with No. 7 on his back.

It is a possibility that could become reality this summer with the beginning of the transfer market window, of course.

The latest statements of the French striker, in which he did not close the door to signing for the Old Trafford club, have triggered alarms at Atletico Madrid.

Curiously, no player is currently wearing the No. 7 at United.

Antoine Griezmann is a busy man this summer, taking several interviews around the release of his autobiography to leave Atletico Madrid pondering the striker's next move.

Having moved to Paris to promote 'Behind the Smile', which has sold 40,000 copies already, the Frenchman has continued to openly discuss his future and a move away from Los Colchoneros.

Atleti continue to doubt what Griezmann's true intentions are and suspect he is looking for a pay rise, which has already been discussed on several occasions despite only putting pen to paper in June 2016.

Indeed, the forward was among the most active in the farewell celebrations at the Estadio Vicente Calderon and his statements often make clear that he's happy in Madrid.

And yet he also labelled the chances of a move to Manchester United to be 'six out of ten' and gave further comments about his desire to win the globe's greatest titles.

"I want to win titles and I've reached a point where playing well and scoring goals isn't enough," he said. "That's over now. What I'm going to look for during the summer when deciding my future is winning titles."

All of this goes on while Atletico remain unaware of their transfer dealings in the summer due to the ongoing appeal of their FIFA ban, currently being heard by the Court of Arbitration for Sport.

"Today, if I had to move it wouldn't be a problem for me. It may be England, which is in fashion, Germany, China or the United States but I'm ready to go," Griezmann has remarked, leaving a huge question mark over exactly where the 26-year-old really wants to be next season.

Pique: Carvajal is a good guy who has no need to apologise

One of the slightly unsavoury aspects of Real Madrid's title win against Malaga on Sunday was how Barcelona defender Gerard Pique became the subject of chants, although the man himself insists no one has to say sorry for their actions.

Dani Carvajal was one of the chief culprits of the taunt at Cibeles and Pique was certain that his working relationship with the right-back won't be affected.

"It was simply a chant that shows how much they remembered their rival, I do not consider it an insult," Pique told a Cruyff Court inauguration event. "It happened in a moment of euphoria. It's normal.

"I play with Carvajal for the national team and he's a good guy, I know him. He sent me a message and I told him that there was need to apologise "

Despite losing on the league crown, Barcelona must pick themselves up for the Copa del Rey final and Pique believes any potential piece of silverware is worth trying for and savouring.

"It's not a failure, but it's not the season that we would have liked," he continued.

"I do not value my seasons in terms of our rivals, we should think more about what we do.

"It's a trophy and it gives us the chance to win a competition like the Supercopa de Espana. All we do is to add titles for the museum, so it is good."

The Spaniard would not, however, be drawn into admitting that Ernesto Valverde is destined for the Camp Nou dugout, although the former Athletic Club boss is a man he admires.

"Ernesto has done a great job with Athletic, he was here [as a player] and I think he could be a good choice," noted Pique.

"I do not know who it will be and I'm not going to get ahead of myself."

Jose Mourinho was confident of a Manchester United victory in the Europa League final on Wednesday night but he needn't have been worried at all as Juan Mata was among his ranks.

The midfielder's first success of many was the 2007/08 Copa del Rey that he lifted with Valencia, scoring the opener in a 3-1 win over Getafe in Madrid.

At Chelsea, Mata set up Didier Drogba's dramatic equaliser en route to the Champions League title in 2011/12 before lifting the Europa League against Benfica a year later.

Lifting the FA Cup before and again after moving to the Red Devils, an EFL Cup and Community Shield had already come the playmaker's way before another winner's medal in Stockholm.

Only once has Mata finished as a runner-up, losing the 2013 Confederations Cup final with Spain but that had come after two crowning moments at the 2010 World Cup and Euro 2012, in which he bagged the fourth of a 4-0 win over Italy in the showpiece game.
Email : [email protected]
Προηγούμενο : Manchester United offer Griezmann 14 million euros a year | Επόμενο : Cristiano Ronaldo insists he hasn't hidden anything from tax authorities
Προβολές : 468
- 3786 προηγούμενη ημέρα