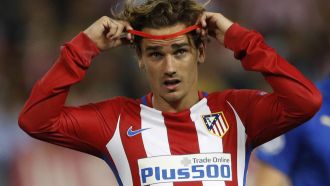 Wednesday, 24 May 2017
Dropping hints that he is actively considering joining Manchester United, the Red Devils have announced they are willing to offer the Atleti star 14 million euros a year.

The Atletico No.7 has a buy-out clause of 100 million and several different factors could end up swaying his decision.

The Rojiblancos are currently banned by FIFA from making any transfers, although a change there could increase the player's likelihood to stay as Diego Simeone would be able to build a team around him.

Furthermore, Champions League football is a must for a footballer of Griezmann's calibre, so the result of Wednesday's Europa League final between Manchester United and Ajax could have a say in the player's final destination.

Real Madrid, although having followed the player for quite some time and well aware of his exploits, will not ultimately make a bid for Griezmann.

Flamengo and Real Madrid have made their agreement pertaining to Vinicius Jr official on Tuesday, with the player joining Los Blancos' ranks in June of 2019 at the very latest.

The 16-year-old Brazilian star could join earlier once he turns 18 as his contract situation changes then, although the Rio club want him to stay an extra year.

A new deal with Flamengo was just a manner to regulate the final deal with Real, and the Bernabeu outfit will be paying 30 million now and the remaining 15 million euros at regular intervals.

Neymar and Gabriel Jesus may have gotten away over the past couple of windows, but in this transfer market Real have gotten South America's biggest star.

Barcelona in fact were well positioned to secure a deal, with Neymar sending several messages to the player personally.

Andre Curry, a member of the company Traffic with deep connections in Brazilian football, had convinced the Catalan club to make an offer, one that was larger than Real Madrid's.

Manchester City, Manchester United, Juventus, PSG, Liverpool and Chelsea were all reportedly willing to pay the player's initial release clause, despite the fact that he only made his professional debut 10 days ago.

Whether such a risk is warrented on such a young player will only become clearer with the passage of time, but few deny the striker's meteoric rise.

Real Madrid went to some lengths to convince him to choose Real over Barcelona, and they will be hoping they'll be repaid handsomely for their gamble, although that may still be a few years down the line.

Guardiola questions the price that Real Madrid have paid for Vinicius Jr.

Real Madrid have paid 46 million euros for Flamengo's 16-year-old sensation Vinicius Junior, a price which Pep Guardiola believes has inflated the transfer market making it difficult for Manchester City, and others, to complete any deals this summer.

The Catalan hinted that a number of players might therefore stay put at their current clubs including at City.

"Real Madrid have bought a 16-year-old player for 46 million euros, and you can imagine how the market is," Guardiola said at a press conference.

"Maybe we'll have a lot of players here, maybe not ... we'll see in the next few days."

With the media astounded by the example, Pep reiterated it.

"A Brazilian boy is going to play at Real Madrid for 46 million euros - 16 years old - that's the market today," he concluded.

Next season, Ernesto Valverde will not be coaching Athletic Club, as the Basque club have made an official statement on his departure on Tuesday.

His next job will almost certainly be Barcelona, set to announce their new coach on May 29th.

He will say his goodbye to Los Leones Wednesday at 12:00 CET in a farewell press conference.

Jose Mourinho's first season at Manchester United will be deemed by many as a failure unless they win Wednesday's Europa League final against Ajax Amsterdam to secure Champions League qualification.

The Portuguese coach arrived at Old Trafford at the start of this campaign charged with the task of restoring United to, if not their old dominance, at least a place at the top table in the Premier League elite.

But a sixth-place finish is lower than Mourinho's predecessor Louis van Gaal managed in his two seasons, which concluded with fourth and fifth places.

It is not the prestige of the Europa League title that would change the perspective on the former Chelsea and Real Madrid manager's first year at United but the place that triumph would secure in the continent's top club competition.

For United, a second straight season outside the European elite would not only be a blow for the fans and the club's status but could also affect their ability to recruit the very best talent from across the globe.

For Mourinho, there is also his own 'brand' to consider.

The 54-year-old left Chelsea last season after a shocking campaign of under-achievement, only for largely the same group of players to march to the Premier League title this term under his replacement Italian Antonio Conte.

The move to United offered a chance to restore Mourinho's reputation as a winner - but a season with just a League Cup triumph and no Champions League place would surely have his critics crowing again.

Mourinho's tactics have been criticised as overly cautious and others have taken aim at his habit of publicly naming and shaming individual players, such as full-back Luke Shaw.

"They don't use Pogba where he should be playing - he's not a holding midfielder. He likes to play higher or off the left," said Henry.

But a win over Ajax would allow a greater hearing for a more generous evaluation of Mourinho's first 12 months at United.

Last month's 2-0 home victory over eventual English champions Chelsea, provided indications that next season United could be both more successful and more entertaining.

Teenage striker Marcus Rashford was excellent in that game and has enjoyed a season where he has made clear steps forward in delivering on his undoubted potential.

Spanish midfielder Ander Herrera was a crucial element in stopping Chelsea's often deadly counter-attacks and has shown that he can become a key element in the United midfield.

French defender Eric Bailly has also grown this season and he is by no means alone - several players in the United squad have enjoyed positive campaigns.

While few have time for Mourinho's press conference 'blame games', there is no doubt he is justified in highlighting United's lengthy injury list during a busy season finale.

A Premier League high of 15 draws - 10 at home - wrecked United's hopes of a top-four spot, but attacking reinforcements in the transfer window should help address that problem.

Win on Wednesday and Mourinho will go into the close season able to promise his transfer targets that next year will be about challenging on the domestic and Champions League fronts.

A defeat changes the narrative to one which next season focuses on whether Mourinho really is the right man to turn around the 20-time English champions' fortunes.

The Europa League final should have been a "football feast" but has been inevitably overshadowed by the bomb attack in Manchester which killed 22 people, Ajax coach Peter Bosz has said.

Speaking to a news conference at the Friends Arena in Stockholm, Bosz opened by offering his condolences and those of the Dutch club to the victims and their families of Monday's attack.

"What happened yesterday in Manchester was something that we all feel. On behalf of the players, staff and everyone at Ajax, we would like to express our sympathy with the victims that unfortunately fell," he said.

"The feeling that prevails for me is that the final doesn't have this glow that it should have. Tomorrow evening should be a football feast, but because of the events in Manchester we are all affected."

Monday's attack following an Ariana Grande concert in Manchester has plunged the city into mourning.

"I think about a week, ten days ago she (Grande) was in Amsterdam and the wives of the players went to the concert with their children, so it's something that really touches us," the 53-year-old said.

UEFA announced that the game would be preceded by a minute's silence for the victims and that the planned opening ceremony would be scaled back.

Manchester United cancelled their planned press conference, instead taking a walk around the pitch before adjourning to their hotel, and Bosz declined to answer when asked if he would have liked the game to be postponed, saying that such decisions were outside of his control.

Bosz believes that when the game finally gets underway his young side have a chance against one of Europe's richest clubs.

"I think we only have a chance to beat Manchester if we play our own game. We have developed a way of playing this season that I always call the Ajax way of playing," he said.

"Tomorrow, if we are capable of playing our way, we have a chance."

Bosz's youthful charges will also benefit from the experience of some of Ajax's 1995 Champions League-winning side.

"The young players are blessed because a lot of those players are still working at Ajax," he explained.

"We have Edwin Van der Sar, Marc Overmars, Dennis Bergkamp is one of the assistant coaches, we have other players working in the youth academy," he said.
Email : [email protected]
Προηγούμενο : Pique: It would be good if Buffon won the Ballon d'Or | Επόμενο : Four out of four for Mourinho in European finals
Προβολές : 497
- 3703 προηγούμενη ημέρα