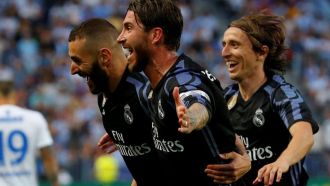 Zidane: "The players were f*****g fantastic"

Monday, 22 May 2017
Zinedine Zidane says there is no greater achievement than to win the league with Real Madrid as a manager and he had some high praise for his players too.

Zinedine Zidane won everything as a player with his club and country. On Sunday night he added a league title with Real Madrid after winning the Champions League last season. It is the 33rd in the club's history and the first since Jose Mourinho was in charge of the club five years ago. You'd think Zidane would take some time to praise himself.

In his press conference after the game, Zidane was only willing to praise his players though: As a trainer, the is nothing better. Professionally, it is the happoest day of my life. More than this can not be achieved. There are still things to be achieved but today, it is the happiest I have ever been professionally. The players deserve it. Everyone suffered, fought and ran and I am delighted for everyone. Everyone has been important. The key to everything with this team is that. Everything is imporant and they were f**king fantasic."

Zidane also said he would dodge Cibeles and let Sergio Ramos take over while admitting that he did not have tears of happiness but said that it was only "at the moment" suggesting he might shed a tear when he arrived back in Madrid late into the early hours on Monday morning.

Cristiano Ronaldo: People talk about me as if I'm a criminal and they don't know sh*t

It had to be Cristiano Ronaldo in the end, his leadership taking Zinedine Zidane's squad to new heights as Real Madrid captured their 33rd ever LaLiga title.

Frustrated by the repurcussions of his earlier 'suitcase comment', the Portuguese star used the triumphant occasion to clear his name.

"People talk about me as if I were a delinquent and they don't know shit," he said. "I'm not a saint but I'm not the devil either.

"I don't watch TV because if I did, I wouldn't have a life for all that is said about me - they mistake me for who I am off and on the pitch."

As for the reasons behind Real's succcess, there were several key factors.

"I'm very happy because it was a spectacular end to the season, the best in many seasons, because of intelligent management, the help of the coach, and the contributions of those who played less," the Real No.7 insisted. "We know the Cardiff final will be very difficult but for now we will enjoy our first LaLiga title in five years."

Navas keeps his promise and shaves his head

Whilst there is still the small matter of the Champions League final to be played, Real Madrid goalkeeper Keylor Navas kept his promise as he shaved his head shortly after Los Blancos were crowed LaLiga champions.

A memorable domestic campaign was capped off with a 2-0 victory at Estadio La Rosaleda in which Navas had to make a number of important saves to keep Sandro Ramirez at bay.

At the full-time whistle the celebrations began and the Costa Rican revealed in his post-match interview in the mixed zone that his new haircut was part of a promise he made.

Speculation surrounding a possible deal for David de Gea persists yet the former Levante stopper has found form at the right time this season and he made clear that he hopes to remain at the Estadio Santiago Bernabeu.

"I have three years left on my contract and I do not think about leaving Real Madrid, I will not stop fighting and next season I will continue to do the same, I will fight even harder than this year," he concluded.

The Camas native borrowed a Spanish flag featuring Los Blancos' coat of arms and pretended it was a cape.

Those present at Estadio La Rosaleda accompanied his moves with the typical 'Ole' chants.

Simeone: I'm staying because Atletico have a future and that future is all of us

Atletico Madrid celebrated their final match at the Estadio Vicente Calderon with a 3-1 victory and with a Diego Simeone promise to stay at the capital city club.

The Argentine's future has been the subject of plenty of speculation, but he reiterated his commitment to the team on Sunday.

"Journalists continually ask me if I'm going to stay and yes, I am going to stay," he said through the stadium's sound system during the post-match presentation.

"Do you know why I'm going to stay?

"Because this club has a future and that future is all of us."

The coach was also full of thanks and spoke of the success Los Rojiblancos have manufactured over the years.

"I thank all of those who have passed through this pitch, from the footballers to coaches to directors," he said.

"They have all helped to build this club.

"For you fans, the idea of feeling is very profound and other teams can have more money or more trophies than us, but they will never be able to equal the feeling that you all have for Atletico."

Simeone and his players can now look forward to a summer break, while they'll be hoping their transfer ban is lifted so that they can keep improving their first team squad ahead of the 2017/18 campaign.

Torres: Atletico have lived 50 years of pure happiness at the Calderon

Atletico Madrid's final match at the Estadio Vicente Calderon finished with victory as Fernando Torres' early brace sent Los Rojiblancos on their way to a 3-1 win, one he was proud to have taken part in.

El Nino had been attending the stadium since he was 10 years old and spoke of his quarter of a century of memories after the match.

"It's difficult to explain the feelings of a day like today," the striker said in his post-match interview.

"Many of us have been coming to the Calderon since we were children and there are a lot of memories that come to mind right now.

"We've lived 50 years of pure happiness at the Calderon.

"It is a tremendous honour to form a part of all this.

"Now the story will continue and the feelings will too."

He also looked to the future and hoped that the Estadio Wanda Metropolitano could enjoy just as much success, with Torres himself still involved.

"I want to feel this same pride, to help with the team's growth and to enjoy this shirt for many more years to help my teammates and this club," he said.

"I thank the fans for their support this season because it has been incredible, especially in defeat.

"We'll be back next year and will try again."

Finally, he was asked about how close he came to a hat-trick, with an offside Antoine Griezmann touching a ball that seemed to be sneaking over the line, but Torres' focus was on other matters.

"It stayed on the line, but these details are the least important part of a day like today," he explained.

"It was a day to celebrate things like [the farewell of] Tiago.

"It was his day and nobody else's."

There will be one final afternoon at the stadium for Atletico as they host a legends match, but Sunday's LaLiga match was the final competitive outing for Los Colchoneros on the hallowed turf.
Email : [email protected]
Προηγούμενο : Sandro: I hope I score and give Barcelona LaLiga | Επόμενο : Pique: It would be good if Buffon won the Ballon d'Or
Προβολές : 486
- 3620 προηγούμενη ημέρα