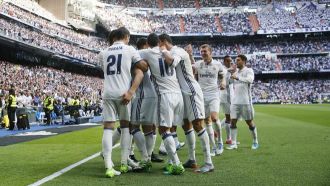 Zidane: Keylor Navas was and continues to be key for Real Madrid

Monday, 15 May 2017
A few good first-half saves from Keylor Navas ensured that Real Madrid eventually managed to cruise their way to a 4-1 home victory against Sevilla, with Nacho, Toni Kroos and a Cristiano Ronaldo brace doing the damage.

The Costa Rican international did well to deny both Stevan Jovetic and Joaquin Correa in the opening 45 minutes, answering a lot of criticism that he been fired his way over the course of a long LaLiga campaign.

"He has been, and is, fundamental. As always," Zinedine Zidane said in his post-match press conference, before addressing the issue of end-of-season pressure.

"It is not the same to see it from inside the group, as it is from outside. In Spain it isn't easy to win LaLiga.

"Each day we are getting closer and with two games left we are going to continue in the same vein.

"It has been a deserved win, we started the game very well. Later, Keylor was very good and with the changes we became more balanced and had a great second half.

"We are going to play [in Vigo] because we missed it, and we will face it up in the same way.

"The good thing is that we are very switched on and very good physically. In every game we are playing for the league."

The game's opening goal came from the unlikely source of Nacho, in the form of a quick free kick.

Something unexpected for his coach, but not unwelcome, and he also discounted rumours of James Rodriguez's possible summer exit.

"These are things that can happen," he continued.

"He was alert and I am pleased with what he did. This is something the strikers normally do, but he did it and I'm happy.

"No, James is at Real Madrid and we really want him to stay. We are only thinking about the final stretch. I don't want to talk about other things."

Support has been key for Los Blancos battling their way to some tough results, with their boss having some special words for those that have been cheering on his players.

"It has been fantastic how the fans have been, spectacular, because they have always been with the team," he said.

"We thank them for their help."

It has long been known that Cristiano Ronaldo enjoys facing Sevilla more than any other team in LaLiga and the Portuguese forward has continued to punish the Andalusians with a goal on Sunday evening.

Ronaldo has enjoyed a fine season this term with his strike at the Estadio Santiago Bernabeu taking his tally to 36 in 43 matches in all competitions.

Whilst this is lower than his usual average, it shows the ever evolving role he has within the team dynamic.

James Rodriguez's shot was parried by Sergio Rico however the rebound fell straight to the 32-year-old who duly converted to pile more misery on Jorge Sampaoli's side.

In 17 matches against the Andalusians, Ronaldo has scored an astonishing 24 goals, more than against any other single team in the Spanish top flight.

His finest moment in such a fixture came in the 2010/11 season at the Estadio Ramon Sanchez Pizjuan as he found the net on four separate occasions in a 6-2 victory.

Zinedine Zidane will be undoubtedly delighted that Los Blancos' talisman is keeping his fine form going right through to the end of the season with glory domestically and on the continent still a serious possibility.

James Rodriguez appeared to wave goodbye to the Bernabeu

With reports linking James Rodriguez to a summer transfer, the Colombian appeared to wave goodbye to the Estadio Santiago Bernabeu as he was substituted against Sevilla.

Manchester United have been named as the playmaker's biggest suitors and the 25-year-old did little to dispel such rumours with his emotional reaction to being withdrawn in Real Madrid's final home match of the campaign.

Zinedine Zidane gave him the opportunity to start the match and he had a hand in the second goal with his shot parried by Sergio Rico straight to Cristiano Ronaldo - although he contributed little else.

As his number was shown on the electronic board Rodriguez waved to all four sides of the stadium, suggesting a potential farewell.

Luis Enrique: I have never doubted the professionalism of Malaga

With Barcelona having won comfortably at Las Palmas, focus turns to Celta Vigo and Malaga and whether they can beat Real Madrid, with Luis Enrique not concerned by Los Boquerones professionalism.

For the Catalans to now win LaLiga, Los Blancos must lose to either side, with Malaga the final destination for Zinedine Zidane's team.

"It is not true that the words you put in my mouth, I have never doubted anyone's professionalism," Enrique said in his post-match press conference.

Though the midfielder has suffered a baptism of fire in his first Barcelona season, the coach was again quick to praise Andre Gomes after the Catalans' emphatic win at Las Palmas.

The ability to play in multiple positions was key to the Asturian's continued support of his player.

"Andre Gomes has the physical condition to play in various positions and with a great mentality and desire," he noted..

With Javier Mascherano getting injured in the warm-up, thus highlighting Barcelona's defensive deficiencies even further, the coach was nonetheless delighted with how the team, and particularly debutant, Marlon, responded.

"We played a very intelligent game, taking advantage of our options," he continued.

"Given the circumstances, that was not an easy duel.

"Marlon played very well and demonstrated his calmness on the ball."

Lucas Digne had started on the right-hand side of a makeshift back four and Luis Enrique was also pleased with the Frenchman's contribution.

"He showed that despite being a 'lefty,' he can do well on the right and he also generated danger in attack," Enrique concluded.

By means of a three-goal performance, Neymar led Barcelona to a comfortable 4-1 away victory over hosts Las Palmas to remain in the LaLiga title hunt.

This marks the fourth match in which the No.11 has scored at least a trio of goals wearing a Blaugrana uniform.

In his first campaign in Spain, the ex-Santos star poured in three goals in a Champions League 6-0 rout against Celtic.

The following year, Neymar collected a hat-trick in the domestic competition against Granada.

Early in the 2015/16 edition of LaLiga, the Brazilian scored a whopping four goals in Barcelona's easy win over Rayo Vallecano.

Following his sensational outing at Estadio Gran Canaria, the 25-year-old has extended his 2016/17 overall tally to 19 goals, still his lowest contribution in front of goal since his debut season.