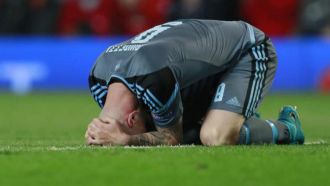 Friday, 12 May 2017
Manchester United survived a fraught finale, featuring an ugly brawl and a red card for each side, to draw 1-1 at home to Celta Vigo and reach the Europa League final on Thursday.

United, who won 2-1 on aggregate, will face Ajax Amsterdam in Stockholm on May 24 after the Dutch side overcame Olympqiue Lyonnais 5-4 on aggregate after a 3-1 defeat in Lyon.

Leading 1-0 from the first leg of the semi-final in Spain, United thought they had killed off the tie when Marouane Fellaini headed them in front after 17 minutes.

United sat back and allowed Celta to dominate possession but looked comfortable until Facundo Roncaglia headed the visitors level in the 85th minute, meaning another goal for the Spaniards could have put them through on away goals.

Tempers flared shortly afterwards when United's Ivory Coast defender Eric Bailly lashed out at John Guidetti, who fell to the ground, before Argentina international Roncaglia got involved. Roncaglia and Bailly were sent off.

Guidetti had a chance to win the tie for Celta with the last kick of the game but failed to control the ball six metres from goal.

"We were the best team in the first leg but we never kill, we never score goals related to the chances we have. It was an open game at home, all the pressure on our side," said United coach Jose Mourinho.

"We suffered until the end... After 14 matches we are in the final. If we win the Europa League I am more than happy. It would be amazing."

Mourinho, who has targeted a Europa League triumph as a way for United to qualify for next season's Champions League, described Ivorian defender Bailly's performance as phenomenal.

"The game was emotional for everyone. Some kept control better than others," he said.

"Facundo Roncaglia is not new in these situations, Bailly was probably naive. We now lose a very important player for the final, and we don't have many."

Celta, whose fans made most of the noise, were lively from the start but United went ahead when Fellaini got in front of his marker to head in at the far post after Marcus Rashford drifted out to the left and delivered a perfect cross.

The hosts were then happy to sit back and contain Celta, making the game strangely subdued. The visitors moved the ball around nicely but failed to make the most of their chances.

United kept the visitors at bay during six minutes of stoppage time and the Celta players sank to their knees in despair as the whistle blew seconds after Guidetti's miss.

Zidane, on the verge of being 'The Best'

It feels as if Zinedine Zidane was born to be Real Madrid, first as a player and now as a coach.

In under a month, the Frenchman can secure the club's first league and European double in almost 60 years with their place in the Champions League final now assured.

Going from the star man in Real's ninth European Cup to Carlo Ancelotti's assistant in the famed Decma of 2014, Zidane has since managed to lift the iconic trophy as coach in his own right and now seeks to be the first man to retain the title in the modern era.

All doubt has been erased by the Blancos boss, who has now dispatched Ancelotti's Bayern and Diego Simeone's Atletico Madrid before a face off with Italy's best in Juventus and Massimiliano Allegri.

If Zidane can find a way past the Old Lady in Cardiff, recognition will surely pour in, as will FIFA's The Best award that was deservedly nabbed by Claudio Ranieri for 2016.

However a lot of football has to be played before that dream can become reality, not least in LaLiga where Sevilla, Celta Vigo and Malaga are all more than capable of puncturing Los Blancos' balloon as they seek a first league crown in five years.

Then it will be on to Wales for a date with Juve on June 3, and if anyone can be the first to defend a Champions League title, surely it is Zidane's Real Madrid.

Dybala: I would have liked to play with Zidane

Paulo Dybala has admitted that he would have liked to play with Zidane, ahead of Juventus' Champions League final against Real Madrid next month.

Real booked their place in Cardiff by beating Atletico Madrid on Wednesday night, with Juventus dispatching Monaco on Tuesday, and Dybala, who has scored 17 goals this season, is looking forward to facing Zidane's side on June 3.

"I would have liked to play with Zidane," said the 23-year-old.

"We all know his quality. I liked his technique, the way he moved around the pitch, the way he went past players. He made difficult things look easy.

"Everyone saw the type of player he was and now he's demonstrating how good a manager he is."

Dybala's four strikes in the Champions League have propelled Juventus to a second final in three years, and he says his best performance this season came in the quarter-final against Barcelona.

Two of Dybala's four Champions League strikes this season came in Juventus' quarter-final first-leg against Barcelona, a game for which he believes he was at his best.

"My top form came in the week that we knocked Barcelona," he explained. "I felt good physically, I was confident and I think that it was one of the best moments of my career."

The former Palermo man made his move to Turin in 2015, and believes that the environment at the Serie A leaders has brought out the best in him.

"I think I've come on a lot because of the mentality at Juventus," he said. "Whenever we're on a pitch we're there to win, without thinking about the team that we're playing against.

"Gigi [Buffon] is the number one of all the number ones in the history of football. [Leonardo] Bonnuci, Andrea Barzagli and [Giorgio] Chiellini are a wall. I've got a lot of adjectives for Dani Alves, I think he's phenomenal. Gonzalo [Higuain] is a goalscorer."

Within the next few hours, Vinicius could be declared a Real Madrid player, if the meeting within Flamengo and Los Blancos representatives goes according to plan.

According to Globoesporte, the final deal will be signed at 45 million euros, although some final details still need to be ironed out, such as the youngster's extra year at Flamengo.

A Real club doctor has given Los Blancos the ok after travelling with the club directors.

Vinicius is expected to begin playing with the Flamengo first team as soon as this weekend.
Email : [email protected]
Προηγούμενο : Zidane: I don't know how Benzema evaded so many players | Επόμενο : Pepe will join Inter
Προβολές : 436
- 3675 προηγούμενη ημέρα