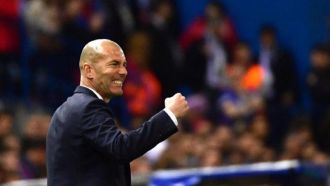 Zidane: I don't know how Benzema evaded so many players

Thursday, 11 May 2017
The second leg of Real Madrid's semi-final clash against their cross-town rivals will forever be remembered for Karim Benzema's brilliant dribble, in which he foxed three defenders in the build-up to Isco's goal, and Zinedine Zidane was happy to recognise his compatriot's contribution.

It wasn't a rosy start for Real however, with Atletico Madrid ahead courtesy of a headed goal from Saul Niguez and a penalty kick from Antoine Griezmann.

However, Benzema then single-handedly destroyed Los Rojiblancos' defense to help set up Isco for a crucial 42nd minute strike, which proved to be the last of the match, as Los Blancos held on for a 4-2 aggregate victory.

"I didn't know how Benzema managed to come out of the corner," Zidane raved to BeIN Sports after the final whistle.

"I honestly can't remember how many players he left behind," he laughed.

"Football is not just about who gets the goals, look at what Benzema did. He has a lot of quality and offers more than just goals, he's a team player."

The Real boss also echoed Marcelo's comments by claiming that he wasn't truly worried by his team's rocky start.

"We had difficulties during the first 20 or 25 minutes, but we didn't worry because we knew were going to create chances and we only needed to score one goal to swing things in our favour again," he stated.

"We played much better in the second half, with Isco and Karim [Benzema] playing between the lines.

Despite Los Blancos' successful passage to the final, Zidane was inevitably asked about those players who weren't given a chance to take to the field at the Estadio Vicente Calderon.

"It's understandable that those players who play less won't be pleased as they'd prefer to play more, but I try to make everyone feel important," he stated.

"In the end, it's my job as the coach to select the team.

"We have a lot of world-class players who would be starters at other clubs, but even if they don't make the starting lineup, they remain plugged in because they believe in the team's mission," he remarked.

Finally, the French boss hailed his players for achieving the rare feat of reaching two UEFA Champions League finals in a row.

"This is all down to the merits of my players, who have worked very hard for this," the 44-year-old enthused.

Simeone: It's a shame we can't clone Godin or Gabi, they give a lot to Atletico

Atletico Madrid won 2-1 on the night but it wasn't enough and they exited the Champions League at the hands of Real Madrid, a fact which Diego Simeone was upset about while maintaining plenty of pride at the same time.

The Argentine was impressed by the way his team scared Los Blancos with two early goals and he had specific praise for the character of his captain Gabi and defensive leader Diego Godin.

"It was an extraordinary match and there was great quality on show from so many players in our team," the coach said his post-match press conference.

"It's a shame we can't clone players like Godin or Gabi, as they give their life to this club.

"It was a Champions League semi-final against a great opponent and they made things difficult for us in their stadium, but our team demonstrated why we have been competing the way we have for so many years."

As for the pre-match confidence in pulling off a turnaround, Simeone thought that the evening's performance justified the faith.

"We weren't talking [about a comeback] just for the sake of talking," he said.

"We believed we could do it and we were close to winning the tie.

"Their goalkeeper [Keyor Navas] was a vital figure.

"We set the tie up well, but their goal hurt us a lot."

Finally, he looked at the bigger picture and was asked whether Los Colchoneros could one day fully break Real Madrid and Barcelona's duopoly.

"This seems like a small step, but this was huge step [towards matching Real Madrid and Barcelona]," he said of the evening's half-comeback.

"I hope that one day we can equal them."

Before that, Atletico must make sure they wrap up third place in LaLiga, which they can do away at Real Betis this Sunday.

Cristiano Ronaldo: We are Real Madrid and we have shown we have more experience

Isco may have been the hero on Wednesday evening but it was Cristiano Ronaldo's first leg hat-trick which has helped Los Blancos through to the Champions League final with the Portuguese forward stating that his team showed they had more experience in such a situation.

The Cardiff showpiece will be Ronaldo's third Champions League final since he joined the club in 2009 and he will be hoping he makes it a perfect three out of three with another victory.

Zinedine Zidane's charges had to navigate choppy waters in the first 15 minutes as Atletico raced into a 2-0 lead, however the hosts made the mistake of sitting back and allowing their rivals to find their feet in the contest.

In his post-match interview in the mixed zone, the former Manchester United star made clear that he felt Real Madrid were deserved winners and that their experience of such situations shone through.

"We knew that Atleti was going to start strongly and they had the luck in scoring two goals, however we have such experience and we knew a goal would kill them, we are Real Madrid and we have shown more experience," he explained.

Juventus will be the club's opponent in the final and it is already shaping up to be a battle between probably the two best teams in Europe and Ronaldo is acutely aware of the challenges his team face on June 3.

"Nothing is easy and we will fight to the end to win the Champions League, we are in a good moment but I see the final as 50-50 between the two teams," he added.

It has been well documented that the Portuguese veteran has been micromanaged this season to ensure he retains fitness right through May and we have all seen the effects of that with his outstanding recent form.

He may not have contributed too much on Wednesday but he remains content with his form.

"I feel good and I have demonstrated that in recent matches, I'm very happy and now we have to prepare well for the end of the season," said Ronaldo.

Zidane's policy of rotation has split opinion this term but it has given opportunities to every player, albeit just not in a run of matches.

With that said, the 32-year-old feels the current squad is incredibly strong and capable of success.

"This team is very good," he continued. "There are players who may play more than others but we have a great squad that is very complete, we show that in every single match."

Isco: Getting to the final is the most important thing

Real Madrid left the Estadio Vicente Calderon for the very last time in an extremely jubilant mood after Isco's crucial away goal helped them progress through to the Champions League final with the 25-year-old himself confirming that reaching the Cardiff showpiece was the most important thing.

Los Blancos survived an early blitz from the hosts which saw Diego Simeone's team cut the visitors' aggregate lead to just one goal inside 15 minutes of play.

However a failure to get the third goal allowed Real Madrid to regain their composure and Isco's late strike from a Jan Oblak rebound blocked any path to Cardiff Los Colchoneros had envisaged.

Isco was keen not to dwell on whether or not he will start in the final and simply stated that getting the club to the event was the most important thing.

"It is a team game and the coach decides the selection but the most important thing is that we are in the final," he explained to reporters.

You could sense the shock within the Real Madrid team as Atletico raced into an early lead and the former Malaga playmaker believes their recovery was the mark of their talent as a team.

"It was expected that they would come out motivated but then they got two goals," he continued. "We started very badly but managed to recovery and from then on we played well, got our goal and that made things very difficult for them."

A biblical downpour was the backdrop to the final five minutes of the match yet despite the torrential rain, the travelling supporters were treated to a small celebration with the players after the final whistle, something which Isco believes the supporters deserved for their efforts.

"It is a small thing but it is something they deserve, they have endured the downpour like champions and we have no trouble thanking them for their support," said the midfielder.

Despite losing 2-1 on Wednesday night, Real Madrid secured an aggregate victory over rivals Atletico Madrid which sets up a clash with Juventus in Cardiff in what will be a rematch of the Amsterdam final some 19 years ago.

On June 3 both the Italian champions and Los Blancos will descend on the Welsh capital to play out the Champions League final just as they did on May 20, 1998.

Then it was the Amsterdam Arena and this year it will be the Principality Stadium as Zinedine Zidane's charges look to become the first team to ever retain the title in its current guise.

Real Madrid will hope for good omens as they were victorious on that occasion, lifting their seventh European Cup.

It was also an evening which would live long in the memory of the current Los Blancos coach as he was part of the losing Juventus team.

Juve, in actual fact, met Monaco in the 1998 semi-final as well and the Italians will be looking for a different outcome this time around.

There is little to choose between the current iterations of the two European behemoths and the final itself could go either way - historically this has been the case whenever Juventus and Real Madrid have met.

Out of their 18 encounters there has been eight wins for each team and two draws with the last meeting coming in the 2014/15 semi-final when the Turin side victorious.
Email : [email protected]
Προηγούμενο : A Buffon kiss to Mbappe who ended his record | Επόμενο : Celta fall one goal short of dream European final
Προβολές : 389
- 3643 προηγούμενη ημέρα