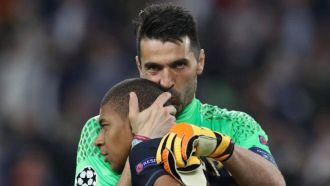 A Buffon kiss to Mbappe who ended his record

Wednesday, 10 May 2017
Two players separated by 21 years did battle in the Champions League semi-final with Juventus' 39-year-old veteran goalkeeper stopping Monaco's 18-year-old attacker for the most part... then in the 69th minute Kylian Mbappe finally beat Gianluigi Buffon, and as a sign of admiration the Italian planted a kiss on his French foe.

Continuing to make history, Mbappe became the youngest player to score in a Champions League semi-final at 18 years and 134 days, after also becoming the first player to hit the back of the net in each of his first four knockout matches.

From the second round onwards, only Cristiano Ronaldo has scored more goals - eight for the Real Madrid man and six for Mbappe.

That goal on Tuesday evening ended Juventus 690 minute run without conceding in Europe's premier club competition - seven games since Nicholas Pareja bagged one for Sevilla in their 3-1 defeat at the Estadio Ramon Sanchez Pizjuan.

The AC Milan side of 2004/05 went 641 minutes unbeaten at the back, and Juventus equalled their knockout record of not letting a goal in over five matches, but they were not solid enough to break Arsenal's all-time record.

In 2005/06, the Gunners reached the final with Jens Lehmann keeping a 995 minute clean sheet.

Mbappe joins a small club which includes Corentin Tolisso of Lyon and Sevilla's Pareja as the only players to have hit the back of the Juventus net in the Champions League.

Of the 690 minutes, Buffon managed to stay unbeaten for 600 of them, the fifth best record in Champions League history, as Neto was in goal during Juve's victory over Dinamo Zagreb.

Zidane: Real Madrid will try to score and beat Atletico

In Real Madrid's quest for a second successive Champions League trophy, Zinedine Zidane has urged his side to forget about their sizeable advantage going into the return leg of the semi-final clash with Atletico Madrid.

Just like in the past two rounds, the coach is adamant that Los Blancos must play to win on the night if they are to reach the Cardiff final.

"We are going to try to score and win, [the aggregate scoreline] will not affect anything that we want to do," Zidane told reporters.

"On the pitch we have to give our maximum to win the game. If we do that, we will see how the scoreline ends up, but our plans are not going to change.

"Atletico will try everything but we are going to try to continue on our path, the one that has brought us here. From the first minute, we will be clear in our game plan."

With Real so close to doing the double, the Frenchman was clear that the trophy cabinet will not necessarily dictate his satisfaction with the players in the coming weeks, but their overall effort levels will.

"The injustice would be if we didn't give our maximum," noted Zidane.

"For eight or nine months, the players have worked every day with incredible professionalism, but every three days you have to prove yourself again.

"Tomorrow is another game and we have to prove ourselves."

Zidane also opted against giving any further news on Theo Hernandez's impending switch from Atletico to Real, insisting that it's not his focus.

"Sergio [Ramos] has answered the question about Theo," shrugged the coach.

"What happens between the club happens and it's not something I can fix.

"One day it's about the Atletico fans, another day the Real fans... That is between them."

Ramos had earlier stated that he is waiting until the end of the season to contemplate anybody joining him in the Estadio Santiago Bernabeu dressing room.

Simeone: If I still have to motivate my players for this match, I should leave

Belief in a comeback is non-negotiable for Diego Simeone at this stage, and if the players aren't fully committed to the idea, the charismatic Argentine considers that he is the one to blame.

A special occasion at the Estadio Vicente Calderon against their fiercest rivals means the squad should be prepared regardless of whether or not the coach flashes his usual motivational charm and inspirational message.

"If I have to motivate my players for this match, then I should leave," Simeone said in his pre-match press conference. "Every match is different.

"Since they beat us in two Champions League finals and most recently 3-0, it is a beautiful challenge."

The message for the fans, then, couldn't be clearer.

"Every fan can believe what they want to believe, but we believe in ourselves and know how strong we are," he pointed out. "We know what situation we find ourselves in and I trust my players a lot that they'll have a big game."

Fatigue in the face of a fresher squad such as Real's could tilt the tie Los Blancos way, but it is the mentality of his players that the coach is most focused on.

"The numbers and kilometres run is there for everyone to see," Simeone continued. "Real Madrid, along with Bayern Munich, have the best squad in the world.

"If we have the emotional balance, I know we'll have a good game.

"The players' anxiety doesn't worry me - they know that to score the second you must score the first."

Gabi: Humility has nothing to do with where you were raised or how much money you have

The last ever Champions League clash at the Estadio Vicente Calderon will host Atletico Madrid against rivals Real Madrid, and following on from Sergio Ramos's comments in the media, captain Gabi has responded with his own mind games about his club's values.

Messages coming from the Los Rojiblancos camp are that motivation and hard work can only be found in the players wearing red and white shirts.

After Ramos pointed to Real's humility, Gabi feels that this value defines in many ways the differences between the two clubs.

"It has nothing to do with money, or where you come from," the Spaniard said.

Diego Simeone's men trail 3-0 from the first leg but they will never give up hope on turning the tie around.

"This team never gives up, we [Atletico] never give up," Gabi explained.

" We do not lack desire, we will be prepared and this team can produce a comeback."

The Madrid derby is always a fierce and heated contest, one in which the club captain knows his side must step up in.

"We have to play better than the first leg, it will be an emotional match," he said.

"Real [Madrid] will have to see what they are up against, so we must score and get some momentum behind us."

Even after defeat at the Estadio Santiago Bernabeu, Atletico supporters were heard singing the hymn in loud voice.

"The spectators gave me goosebumps after we lost, we could hear them from our hotel and we will try to live up to them." he said.

This will be the final farewell to the Calderon and Gabi would love nothing better than to reach the final.

"Every moment here is special, but this will be extra special and we will try to win the game."

"We have to be solid and a compact team like usual," he explained.

"Playing in Real's half is a must and we must create and take all our chances."

Back in February 2015, Los Rojiblancos defeated Los Blancos 4-0 at home in LaLiga.

"I wish we could repeat that result," the Spaniard said.

"That time we scored two very early and that allowed us to sit back a little then hit them for another two."

"We are facing dangerous opponents but we are all convinced we can get the victory and go to Cardiff for the final," the midfielder concluded.

Unable to secure a spot in the heavily contested Real Madrid starting XI, James Rodriguez could be on the move to Manchester United this summer, according to ESPN.

The Colombian's future at Los Blancos is far from certain and a move to the Red Devils is just one of many possibilities as several top clubs are interested in a player of Rodriguez's quality.

Playing under Jose Mourinho would be an interesting challenge for the Cafetero, one which the No.10 would welcome, should the possibility arise.

The first leg results of the Champions League semi-finals suggest Real Madrid and Juventus could be the two teams squaring off in Cardiff next month, a duel which Radomir Antic would back the Italians in.

Pointing to their strength across the pitch, the former Real coach found it difficult to look past Massimiliano Allegri's side.

"A team that has conceded just two goals in 11 matches and that was able to keep out Barcelona for 180 minutes makes itself the favourite to win the Champions League," he said in an interview with Serbian newspaper Blic.

"Juventus is a balanced team in every phase of the game and that is their best weapon."

Although it would cost one of his former clubs Real or Atletico Madrid, Antic admitted he'd be happy to see Gianluigi Buffon finally lift the continent's greatest prize this season.

"He is also a great person off the pitch and he deserves to lift this trophy," the 68-year-old said.

Finally, the Serbian also pointed out that the potential absence of Dani Carvajal for a final would cost Los Blancos dearly, perhaps more than some might think.
Email : [email protected]
Προηγούμενο : Chiellini: Juventus have more belief than two years ago | Επόμενο : Zidane: I don't know how Benzema evaded so many players
Προβολές : 372
- 3613 προηγούμενη ημέρα