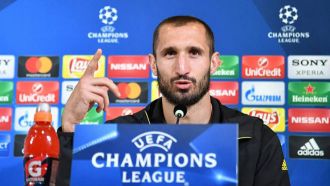 Chiellini: Juventus have more belief than two years ago

Tuesday, 09 May 2017
The current Juventus side have more self belief than the team which finished runners-up in the Champions League two years ago, defender Giorgio Chiellini said on Monday.

Beaten 3-1 by Barcelona in Berlin in the 2015 final, Juve have an excellent chance to reach the showpiece match again when they host AS Monaco on Tuesday holding a 2-0 lead from the away leg of their semi-final tie.

"I'd say the greatest difference between this Juventus and the one you saw in the final two years ago is inner belief," Chiellini told reporters.

"I don't think any of us really expected to go all the way to Berlin but we grew into the competition as it went on.

"We showed maybe a little too much respect to Barcelona in the final and that showed in our performance.

"This time around we know how to manage the key moments and we have the confidence to go toe-to-toe with Europe's best in the knowledge that we have what it takes to beat them."

Juventus are unbeaten in the competition this season and have not conceded a goal in their last six Champions League games stretching back to the final round of the group stage.

Juve coach Massimiliano Allegri was predictably cautious about their chances, although no team has ever lost a Champions League knockout stage match after winning the first leg away from home by two goals.

"You never know in football, we have to keep our concentration," he said. "Monaco have nothing to lose, they have quality players and are playing for a place in the final."

Monaco coach Leonardo Jardim said his team needed to be more efficient than they were against Juve at home.

"In the first leg, we had as many shots on goal as Juventus but with an efficiency rate of zero percent," he said.

"We need to play our game and try and score a goal in the first half.

"We will do everything we can to make sure this is not our last match in the competition. At the start of the season, nobody believed we would get beyond the group stage."

The winners will play Real Madrid or Atletico Madrid in the final in Cardiff on June 3. Real lead 3-0 from the first leg.

Atletico are sure to be especially tough and emboldened by the Estadio Vicente Calderon and will play as intensely as the regulation allows, although Real Madrid aren't known to step down in the face of a challenge.

Several messages to get physical throughout the 90 minutes as the basis for an improbable comeback have been circulated and shared by Atleti players on social media before the match, meaning Turkish referee Cüneyt Çakr could have his work cut out for him.

Emotions and cooler heads will prevail, so Los Blancos will have to use their wealth of experience to control such a difficult scenario.

There has been a tense atmosphere in the Barcelona dressing room over the last few days, after a training ground bust up between Juan Carlos Unzue and Neymar in which the assistant coach compared the Brazilian's attitude to that of his contemporary, Ronaldinho.

The incident apparently occurred after Unzue reproached the player for the way in which he was applying himself in training.

"If you continue this way, you'll end up just like Ronaldinho," he said to Neymar, a comment that was clearly not to the liking of a player who can count the former Barcelona No.10 amongst his close friends.

Incredibly angry for the rest of the session, the comment, which was probably meant to try and motivate Neymar, looked to have had the opposite effect.

The episode further complicates the possibility that Unzue will inherit the squad from Luis Enrique at the end of the season, because Neymar is not the only one who has had a falling out with the Navarrese.

Lucho's assistant is considered to have been behind many of the tactical innovations that have been implemented this year, but some haven't met with universal team approval.

Some players have even dropped hints within the dressing room walls that if Unzue is to become the new first-team coach next season, they will find a way out of the club.

Real Madrid's signing of Theo Hernandez moved a step closer on Monday as the left-back completed an extensive and exhaustive medical, one which he passed without problem.

Currently on loan with Deportivo Alaves, the Atletico Madrid defender is determined to join Los Blancos despite Los Colchoneros' preference to sell him to Barcelona.

Now, having come through his medical at Madrid's La Moraleja Sanitas Clinic, the 19-year-old is set to move to the Estadio Santiago Bernabeu when Real Madrid deposit his release clause of 24 million euros with the Spanish league and put an end to the long-standing non-aggression pact between the capital city clubs.

Real Madrid's intention is to officially announce his signing following Alaves' Copa del Rey final against Barcelona on May 27.

In addition, Barcelona's reported attempts to sign the defender have been revealed as false.

Puel: Van Dijk will stay at Southampton next season

Southampton will not sell captain Virgil van Dijk in the next transfer window as he recovers from a long-term injury, the Premier League club's manager Claude Puel has said.

Netherlands centre back Van Dijk had been a key part of the Southampton defence since arriving at St Mary's from Celtic at the start of 2015-16 season but has not played since suffering an ankle injury against Leicester City in January.

British media have linked the 25-year-old with Liverpool, Arsenal and Manchester City but Puel said he was confident Van Dijk would still be a Southampton player next season.

"It was a bad injury," Puel told a news conference before they host Arsenal in the Premier League on Wednesday. "But now it's okay. The surgery is finished... he can start the gym work and rehab to come back for next season.... and with us.

"He is our captain. He is important for us. We will wait until the beginning of the season to see him again on the pitch.

"He has a long contract and I think the directors want to keep him".

Puel also hopes striker Charlie Austin, who has been out of action since December with a shoulder injury, will be back in action this season after playing for the under-23s last week.

"I am happy with his work. If he continues perhaps it would be interesting to see him play," Puel added.

Following the Arsenal clash, 10th-placed Southampton face a trip to second-bottom side Middlesbrough on Saturday.

Mario Balotelli could be making a move to LaLiga this summer, with Las Palmas keen to sign the Italian to boost their attacking ranks for the 2017/18 season.

Their interest is nothing new, given that they were also offered the 26-year-old's signature in the previous transfer window, only to turn it down at the time.

Now they are keen to bring him to the Canary Islands after an impressive season with Nice in which he has scored 15 goals in Ligue 1.

If Los Amarillos do sign the player the intention is to offer him a similar contract to that of Kevin-Prince Boateng, who arrived last summer on a one-season deal, with the option to extend it for a second year.

Boateng himself has previously labelled ex-AC Milan teammate Balotelli as one of the best striker's he's played with, as well as one his best friends in football.
Email : [email protected]
Προηγούμενο : Maradona will coach in the Emirates second division | Επόμενο : A Buffon kiss to Mbappe who ended his record
Προβολές : 434
- 3881 προηγούμενη ημέρα