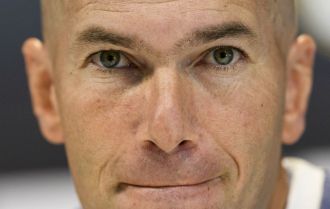 Zidane: Real Madrid have to play a perfect game on Wednesday

Sunday, 07 May 2017
Atletico Madrid must fight back from being 3-0 down on aggregate against Real Madrid on Wednesday evening, in the second leg of their Champions League semi-final tie against their local rivals, but Zinedine Zidane knows that they job is far from done.

Cristiano Ronaldo's hat trick is the only thing that stands between the two sides at the halfway point, with the French boss targetting a strong all-round performance to ensure that there is no unexpected comeback at Estadio Vicente Calderon.

"Now we will relax, thinking about Wednesday, which is going to test us a lot more than tonight, and we are going to have to have a perfect game," Zidane told a post-match press conference after Los Blancos' 4-0 LaLiga win over Granada.

"We did well scoring so soon and this made things happen. The first half was phenomenal, we took the chances that we had. We kept going, it was important to continue to be on top of the table and now we have three finals left - and the other on Wednesday in the Champions League.

"We are thinking about ourselves, on winning. Three finals remain."

Zidane admitted that this weekend was very much about rotation and ensuring that his squad were fully fit and raring to go for their midweek clash in Europe.

"Today, we are thinking about today, everyone did well. The idea is that everyone gets some minutes, that everyone is very good physically and at these stages this is very important as we are playing for everything.

"It has been nine months of a lot of work, there are moments where you are dead at the end, and we are able to say that physically everyone is good," he said.

It didn't take long for Alvaro Morata to get on the scoresheet against Granada and he overtook Karim Benzema in goals scored this season in the process.

Across all competitions, the Spaniard has 19 in total - 14 in LaLiga, three in the Champions League and two in the Copa del Rey.

Karim Benzema, on the other hand, has 17 total - nine in LaLiga, five in the Champions League, one in the Copa del Rey and two in the FIFA Club World Cup.

The French striker has played 2,892 minutes this year to Morata's 1701, which comes out to about 11 games more than the ex-Juventus man.

During the beginning of the season, calls for Morata to be given the starting role were cast aside by Zinedine Zidane, and those could be creeping up once more as the season comes to a close.

Luis Enrique: What Neymar does is sometimes like ballet rather than football

After a great, and necessary, win over Villarreal, Barcelona coach, Luis Enrique, highlighted the performance of Neymar above the rest of his team.

The Brazilian was at his impudent best and the Yellow Submarine couldn't cope with him for long periods.

"Neymar has a totally different interpretation of football from anyone, even to any Brazilian," Enrique said to reporters in his post-match press conference.

"Most dribbles he does not give me time to see them, it's a great pleasure to watch.

"It makes Neymar, who often looks more like ballet dancer than a football player, effective."

The coach was also impressed with Barcelona's attacking verve throughout the 90 minutes.

"The team was very good with and without a ball" he continued.

"Scoring 4 goals against Villarreal indicates how well we have handled the pressure and we played a complete match against a great team."

Known for his abruptness in press conferences, there was a lighter hearted moment at the end of this one.

"Monday is my birthday," Enrique reminded everyone.

Zinedine Zidane's heart does not work to the tune of simple contracts and that's why it's hugely important that Real Madrid keep the moral commitment of their coach locked down.

While Los Blancos look set for a successful first full season under the Frenchman, his desire to win has always taken precedent over all else and talk over the spring has been dedicated to how his job security may change were the trophy cabinet to remain untouched in the coming weeks.

However Zidane is coming round to the notion that the club hierarchy, fans and players are all totally behind him no matter what.

It's true that success must come in one form or another, but the consensus around Real is that he's the best thing to happen to them in 20 years, first as a player and then as coach.

Zidane's natural inclination in the event of a rough end to the campaign may be to up sticks and let someone else have a go, but president Florentino Perez is desperate to have the former attacking midfielder by his side.

Of course, the 44-year-old did take the decision to retire as a player when he felt that his usefulness had begun to decline and left the Estadio Santiago Bernabeu in a trophyless year, but also when Perez was not in charge.

With his commitment to the president assured, come what may, there are plenty in Madrid who feel that Zidane's continuation would be their best signing of the summer.

PAOK Salonica defeated AEK Athens 2-1 to win the Greek Cup for the fifth time on Saturday but the final was marred by violence before the match kicked off at the Panthessaliko Stadium in Volos.

The start was delayed by 30 minutes after fans of both finalists clashed with riot police, who used tear gas to break up the scuffles in and around the ground.

According to local reports, 30 people were admitted to hospital, including six with serious head and stomach injuries.

Fans were seen using a variety of objects as weapons -- from ripped up stadium seats to metal poles -- as they lit flares and tried to climb over the fencing to invade the pitch.

Before the delayed start at 9 p.m. local time, a minute's silence was observed for a Cypriot PAOK fan who died this week after being hit by a car while trying to flee crowd trouble in Thessaloniki.

On the pitch, PAOK won their first trophy in 14 years after goals by Dutchman Diego Biseswar and substitute Pedro Henrique earned them the Cup.