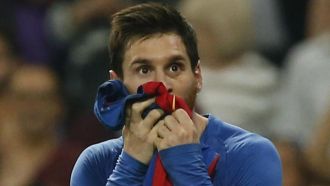 Saturday, 06 May 2017
On Friday evening, major steps were made towards Lionel Messi's contract renewal as a meeting took place between the Barcelona club establishment and Jorge Messi, the player's father and agent.

The Blaugrana star's is tied to the Catalan club until June of 2018, and despite much speculation, now looks more likely to be staying put after a cordial first meeting between the two parties set up a timeframe for him to finally renew.

There isn't a deal in place yet, but the main points have been agreed upon by both parties.

The meeting takes place a few days before Jorge Messi travels back to Argentina, and since the next steps are more minor, those can be ironed out from a distance.

Zidane: BBC will not play by decree

Real Madrid travel to Granada this weekend in LaLiga with the title in mind, but due to having one eye on their Champions League semi-final second leg against Atletico Madrid on Wednesday, it is the second string's turn to impress in the absence of Karim Benzema, Gareth Bale and Cristiano Ronaldo.

Last time out in the Spanish top flight, Deportivo were demolished 6-2 by Zinedine Zidane's B side, with the likes of Isco, James Rodriguez, Alvaro Morata and Lucas Vazquez making their case for a bigger role in the first team.

"All of the players are very good, but BBC are too. They won't played by decree," the Frenchman said at his pre-match press conference, before responding to comments made by Toni Kroos about his side being better with four in midfield.

"We start in one way, and we can end in another," he continued.

And it is always going to be this way. I don't know if you want to say that with BBC we have less balance - I don't believe that.

"They are world-class players, but what Toni says could also be true, to start in one way and to end in another, for more balance.

"The other day we tried to play with wingers in order to attack and defend. Everyone can have their opinion, but I am content with BBC and with everyone.

"There are people that can think that those who are playing less, play better. But there are few games with BBC where we weren't good."

Zidane wasn't giving anything away in terms of his fears heading into the business end of the campaign, with Real Madrid having the title in their own hands as the clock ticks down.

"I am not worried by anything, but we haven't won," he noted.

"We are able to win everything, and also win nothing. The only thing that we know is that we have to keep working until the very end, until the last minute of the last game.

"I don't know what is going to happen at the end, but what I like is that we work with humility and respect.

"It is a very important game for us. If we think that it is going to be easy, we will be mistaken. They are a relegated opponent, but they have good players."

Despite Los Blancos being favourites for the title race, as well in the final four of the Champions League, Zidane's future as boss is yet to be confirmed, but the Frenchman is relaxed.

"In Madrid, they need results. I want to be at this club, I came here 16 years ago, but I know exactly where I am," he said.

"When you don't get good results, you go home, it is like this, and I have this in mind. During my career, I have always tried to win everything."

Zidane's management of Cristiano Ronaldo both on and off the pitch is getting praise in recent weeks, with the Portugal international looking in top shape heading into the tail end of the campaign.

"Cristiano has the respect of all Real Madrid fans, of the club, the coach and his teammates. And that is it," he explained.

"I speak a lot with Cristiano and he knows me very well. He knows that until now he has had 60-70 games per year and the accumulation of all of this means he has to rest a little.

"I am not the coach that has sat Cristiano down, it isn't like that.

"I know that players have to rest and if every player wants to be at their best for the end of the season, there has to be rest.

"The truth is that I am trying to do the best possible. I also understand football.

"The president has given be the honour of coaching this great club.

"Every day I am going to manage it with a lot of excitement and I am going to keep learning and progressing. What is said outside doesn't matter."

Zinedine Zidane's rotation policy has meant that Cristiano Ronaldo has reached the end of the season in impeccable form and fitness, as the Portuguese star hasn't played an away match in LaLiga since the trip to the Estadio San Mames almost two months ago.

'El Bicho' (the bug) is at home at the Estadio Santiago Bernabeu, his habitat, where has has turned the stadium's inexplicable jeers into complete awe.

There is even a chance the Portuguese star could miss the match against already relegated Granada on the weekend at Estadio Los Carmenes, so strict is the French coach's policy.

Since March 18th, Cristiano Ronaldo has played in four league matches, all at home.

Not present at Estadio Butarque, Estadio El Sadar, and Estadio Riazor, that rest has gone a long way in boosting his Champions League heroics.

The strategy, then, seems to be working: nine goals in his last five games.

As he has struggled for fitness this year with injuries, it has only been 10 away trips for Cristiano Ronaldo and that doesn't look set to change until LaLiga's final weeks.

Luis Enrique: It's partisan to only look at what Real Madrid have done in the Champions League

Barcelona find themselves top of LaLiga heading into the weekend, courtesy of having played a game more than second-placed Real Madrid, but Luis Enrique has been keen to remind the media that achievements do not only exist within European competitions.

After winning the last two league titles in Spain, the Barcelona boss was keen to protect his own squad's glories over the last few years.

Plenty has been made of their exit from the Champions League this season against Juventus - Los Blancos marching on to the semi finals.

"When they are almost at another final, it shows the level that Real Madrid are at as a club," he said to reporters at his pre-match press conference.

"But it is a little partisan to one look at what they have done in the Champions League.

"Also look at who has won the league in recent years."

The former Celta Vigo coach was given plenty of questioning on the topic of the hosts' title race with Real Madrid, with his team certainly having the tougher of the contests this weekend.

"I am focused on what we can control," he continued.

"It is certain that there are eternal rivalries, but we have to concentrate ourselves on what we can do or what is left to do for Barcelona.

"It is the same story as every end of season and we will deal with the pressure.

"Sometimes you are behind, other times others are ahead but you have to deal with it and overcome it."

Villarreal arrive at the Camp Nou with the second-best defence in LaLiga and Luis Enrique is under no illusions that his side will have it tough against the Yellow Submarine, who are chasing European football themselves and perform well versus the big teams.

"I am not only fixed on this, but rather what they can do as a team," he noted.

"They are organised with the ball and they defend very well on their own pitch.

"Looking at the statistics and how they play, they are one of the most difficult opponents in the league.

"The most complicated match is this because it is the next and the closest one that we can have an influence on.

"The difficulty is increased against an opponent that is fighting for Champions League football.

"At Villarreal [last time] we deserved to win. They made the most of a counter attack and we didn't do the same with the chance that we had."

The Mbappe and BBC debate

He is still in the throws of youth (18 years old) and has dazzled the cream of European football. Kylian Mbappe is a budding superstar who may well break a number of transfer records this summer. Despite Monaco being keen to keep him for one more season, and insisting this will be the case, the fact his contract ends in June 2019 plays into the hands of his suitors as his price would be less next year given he will only be one year from departing on a free transfer.

Mbappe wants to sign for Real Madrid. PSG, who started with a bid of 60 million euros, then went up to 80m euros are already thinking of offering 110m euros. Then there is Manchester United, who have already made an offer of 100m euros, and Manchester City are also keeping an eye on the situation. In the Principality, the word is they are looking for around 130m euros. However, back in 2014 they asked Real Madrid 120m euros for James Rodriguez and in the end the transfer was done for 75m euros, plus an extra 5m.

Zinedine Zidane's good relationship with Mbappe and his father - who also acts as his agent - is the biggest asset Madrid have. They have known of him for three years and are aware of his liking for Real Madrid, which we have seen in a photo with his room full of posters of Los Blancos players. However, because of this close relationship they are also aware that for the player, and his family, it is a priority to make sure he goes somewhere he will get first team football, and not just sit on the bench. This is where Real have to be careful.

Mbappe's enormous confidence means he will already expect to be a starter at Real Madrid, which links to a very delicate situation at the club. The debate about the untouchability of BBC has begun to be settled inside the club. Cristiano Ronaldo is a cert, but only Cristiano.
Email : [email protected]
Προηγούμενο : Cristiano Ronaldo, Messi, and Buffon performances heat up Ballon d'Or race | Επόμενο : Zidane: Real Madrid have to play a perfect game on Wednesday
Προβολές : 429
- 3433 προηγούμενη ημέρα