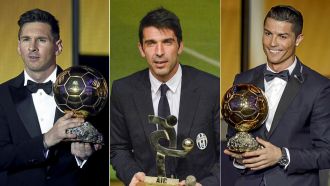 Friday, 05 May 2017
The Ballon d'Or is still a long ways off from being decided, but when all is on the line, it is decisive months like this past April that determine the eventual winner.

Cristiano Ronaldo's five goals against Bayern Munich and hat-trick against Atletico, Lionel Messi's Clasico heroics, and Gianluigi Buffon's incredible saves against Monaco mean the trio are the favourites at this stage for next year's edition.

If Real Madrid repeat as Champions League winners, the award is as good as Ronaldo's.

Should the Portuguese star win it, the Confederations Cup wouldn't be as important a consideration, especially as Lionel Messi will be watching from the sidelines.

As the business end of the season continues to ramp up, Real Madrid have collected all the cards ahead of the six most decisive games of their attempts at winning LaLiga and the Champions League.

An historic double is certainly in their sights after the 3-0 beating of Atletico Madrid in the first leg of their semi-final tie, putting one foot in the Cardiff final, while they can even afford a draw with four games left in the league.

In total, should Los Blancos reach the final and barring any extra-time drama, there is just 540 minutes of action left in 2016/17, approximately the same length of the Godfather trilogy.

Focus will be on LaLiga this Saturday when Real travel to the southern city of Granada for a bout with Tony Adams' already relegated side, before the second leg with Atletico at Estadio Vicente Calderon on Wednesday.

Immediately after that, Sevilla come to the capital for Madrid's final home game of the campaign on Sunday May 14, ahead of the rearranged trip to Celta Vigo the following Thursday.

The domestic season draws to a halt with it currently set to go to the final day, when Zinedine Zidane takes his team away to Malaga, a fortnight before a potential Cardiff date with Juventus or Monaco.

Ozil: I never felt as much pressure at a club as at Real Madrid

Currently under pressure at Arsenal, Mesut Ozil nonetheless insists that the most intense scrutiny he has ever faced came during his spell at Real Madrid.

The Arsenal midfielder, who played at the Estadio Santiago Bernabeu between 2010 and 2013, won the Copa del Rey, La Liga and the Spanish Super Cup with Los Blancos.

"You can't compare the expectations of any club with those at Real Madrid, not even Arsenal or the German national team," the 28-year-old told Goal. "At Madrid you have to win every game.

"If you draw, even against Barcelona, you're failing. Especially if you're a young player, you have to play with that mentality.

"[Jose] Mourinho helped me a lot with that, he always supported me and got the best out of me."

Ozil revealed that in 2016 he rejected a move to a Chinese club, but did not share which team attempted to secure his services.

"[Money] has never played such an important role in football," he said. "[The offer] was tempting, but titles and objectives are much more important than money and that's why I said from the start that China was not in my plans."

Several injury concerns for Jose Mourinho's side were cast aside as the Red Devils got off to a fast start, with Rashford forcing the first of several saves of the half from Sergio just eight minutes in.

It was a back and forth opening period, as Celta came right back for one of their best chances all match, a Radoja cross finding Was for a free header in the box, although he sent it wide.

Minutes later, a well worked and dominant midfield run from an overpowering Paul Pogba sent Henrik Mhikitaryan through on goal with a perfectly weighted pass, only for the Armenian to hit it straight at Sergio.

As the match progressed, United found themselves more and more comfortable, forcing save after save from Sergio as the half came to a close, but not finding the away goal breakthrough initially.

Frustrations in front of goal were mounting, especially given United's season, thus giving the home side hope in a historic match for the Celtina faithful.

Eventually, a second-half free-kick from Rashford wrong-footed the Celta shot-stopper in the 66th minute for the only goal on the night to give the English side a deserved advantage into the second leg.

Celta found a little bit more space on the break, but Manchester United remained in control and put an end to any late push, with David De Gea's goal hardly troubled all night.

Pione Sisto looked most dangerous for the hosts, with several dribbles from the left wing trying to find the equaliser, but it wasn't meant to be as Celta's European dreams were dented by a professional first leg performance from the favourites.

Alexandre Lacazette has been targeted by Atletico Madrid as one of their first signings once their FIFA-imposed transfer ban is lifted.

Club officials travelled to Lausanne on April 24 to discuss the matter with the Sports Arbitration Tribunal and want the Lyon striker once their ban is lifted.

MARCA reported Atletico's interest in the France striker on March 13 and French publication L'Equipe reported yesterday that Atletico is Lacazette's preferred destination should he leave the Ligue 1 outfit.

But Los Rojiblancos are not the only side to be perusing the 25-year-old's signature, with PSG, West Ham and Arsenal also interested in the frontman who has scored 31 goals in 41 games this season.

Lacazette has been on Atletico's radar for some time now, having been touted for a move to the Estadio Vicente Calderon last summer.

Should the overarching body lift the club's transfer ban, it is understood that acquiring Lacazette would cost around 35m euros. Any move for the player would also necessitate the departure of one of the club's current strikers from the pay roll.

Kevin Gamerio, one of those who may be on the way out of Atletico, is understood to be the subject of interest from China. It is believed that the player has told Atletico to pay attention to the interest, which he sees as an irresistible opportunity on an economic level.

Fernando Torres's contract at Atletico will end at the end of June and talks have not yet taken place about renewing the 33-year-old's deal, which may signal the end of his time with the club to allow for the capture of Lacazette.

Real Madrid were able to dominate against Atletico in no small part due to their midfield control, and Toni Kroos was one of the masterminds behind the performance.

An extra-man in midfield gave Los Blancos more control, with Isco playing in his preferred ten spot and liberating the wings for the in-form full-back pairing of Dani Carvajal and Marcelo.

Not only did he complete 104 passes out of 108 (96%), his set piece deliveries were a constant threat, not to mention his off-ball work rate helped keep Atleti from producing a single shot on target.

So dominant was Real Madrid's possession game that they had 251 more passes than Atletico on the night.

The midfield was clearly where the match was won, and Toni Kroos was a big reason for that.
Email : [email protected]
Προηγούμενο : Higuain paves way for Juventus | Επόμενο : Messi's contract renewal talks on the right track
Προβολές : 488
- 3553 προηγούμενη ημέρα