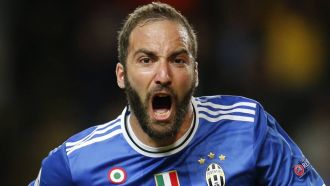 Thursday, 04 May 2017
A brace from Gonzalo Higuain has Juventus poised to reach their second Champions League final in three years after a 2-0 win over Monaco on Wednesday night in their semi-final first leg at the Stade Louis II in Monaco.

Higuain finished off a brilliant counter-attack with a strong strike in the 28th minute, before doubling the lead with a fine finish in the 59th minute. While the Argentine certainly played a big part in the triumph, much of the credit must be reserved for Dani Alves. The former Barcelona man assisted on both goals and reminded everyone of his big-match pedigree.

Then there was of course the Juventus defence, with the three-headed centre-back monster of Giorgio Chiellini, Leonardo Bonucci and Andrea Barzagli, plus savvy veteran goalkeeper Gianluigi Buffon. While Monaco starlet Kylian Mbappe certainly had his moments and caused headaches, Juve were able to contain the 18-year-old in a way few have in Europe this season.

With the cushion of two away goals and just two goals conceded in the entire 2016-17 Champions League, Juventus look set to reach the final in Cardiff and potentially play Real Madrid in what would be a rematch of the 1998 Champions League final.

The Italians started the much better of the two with right-back Alves penetrating deep into the Monaco area. But when Monaco did foray forward they were a threat, and Mbappe almost surprise the visitors with a smart near post run in between Bonucci and Barzagli but Buffon was there to save the young Frenchman's shot.

But Monaco were also leaving themselves vulnerable to a Juventus counter-attack and just past the midway point of the half the reigning Serie A champions struck through Higuain.

It all started with a fantastically played back-heel from Dybala to Higuain, allowing the former Napoli man to race into the Monaco half. Higuain then played a ball forward to Alves, who played his own back-heel to Higuain and from there the Argentine curled a right-footer in past Monaco goalkeeper Subasic for a 1-0 Juve lead.

Monaco ratcheted up their attacking enterprise in the second-half, starting with a Falcao chance just minutes after the re-start that the Colombian shot right at Buffon.

But the Alves-Higuain connection would doom Monaco a second time just shy of the hour mark. Alves and Dybala teamed up to dispossess Monaco's Bakayoko in the Monaco half, and the Brazilian full-back took advantage by playing in a perfect pass that met the sliding Higuain who re-directed a right footer in past Subasic to make it 2-0 in Juve's favour.

Monaco tried in vain to score in order to have some sort of momentum going into next Tuesday's return leg, but as Barcelona learned in the previous round, breaching the Juventus defence is a herculean task. Each time Falcao & Co. got forward they were inevitably turned away, with Buffon reserving his best save of the night on a last-minute on a Germain header.

After rivals Real Madrid cruised to a 3-0 victory, the last sight Barcelona fans wanted to see was former player Dani Alves aid ex-Madridista Gonzalo Higuain, a player who has given Lionel Messi so much international heartbreak.

Pipita had only scored two goals in 24 matches in Champions League knock-out stages, giving him the reputation of a player who doesn't show up when it matters most.

But the Brazilian 34-year-old put in another memorable European display, dishing out two assists in just 60 minutes to change Higuain's fate.

For the second straight season, the Argentine hits at least 30 goals on the year - he had 38 for Napoli last campaign and currently sits at 31.

Dani Alves proves he is still one of the world's best

When we get to this point of the season the truly great players are usually the ones who come to the fore, and it was Dani Alves' performance at the Stade Louis II which caught the eye on Wednesday night.

In just his first season at Juventus, Dani Alves has seamlessly integrated into the Bianconeri line up and has quickly become one of the team's key players.

The team he left in the summer - Barcelona - have, on the other hand, had a problematic season at right-back following the Brazilian's departure.

Against Monaco, Alves played a bit higher than usual, as Massimiliano Allegri went with the 'BBC' backline of Leonardo Bonucci, Andrea Barzagli and Giorgio Chiellini.

This meant Alves had the luxury of a more attacking role and the ability to provide two assists to Gonzalo Higuain - first from a backheel, then a brilliantly measured pass.

Despite spending much of the match contributing in an attacking sense, he also found time to help out the Italian centre-back trio as Monaco could find nothing more than a Black and White wall.

In his first campaign since abandoning the good ship Barcelona, Alves has once again shown he is still one of the best full-backs in the world.

Not even Europe's best attack can unlock Juventus' defence

The pre-match excitement centred around how the high-flying Monaco attack would approach breaking down Juventus' resolute defense, but there were few signs of any cracks on Wednesday night as a Higuain brace lifted the Bianconeri.

The French club have scored 146 times across all competitions yet in the first leg at least, it was the Old Lady who used her experience and guile to come out on top.

It is now six matches, in what comes out to 711 minutes without conceding a goal, a feat only possible for a keeper of Gianluigi Buffon's stature.

Olympique Lyon's Tolisso and Sevilla's Parejo are the only two goals the Italian side have conceded all tournament.

In fact, only twice all season have Massimiliano Allegri's side conceded three times - 3-1 defeat against Genoa and 3-2 loss to Napoli.

Needless to say, on neither of those occasions would the result be enough for Monaco to advance were that scenario to repeat itself.

Can Real Madrid survive without Carvajal?

Although Dani Carvajal has proved himself a vital cog in Zinedine Zidane's football machine, the French coach will have to look for alternatives after the defender's injury against Atletico Madrid.

The Spaniard was substituted off after half-time, suffering thigh damage, which might prevent him from featuring in the rest of the season for Real Madrid.

With him missing in 12 LaLiga games, Real Madrid have managed to earn all the potential points and make the most out of their encounters.

Danilo and the Spaniard could be the possible replacements for the former Bayer Leverkusen right-back.

Although his injury has caused a terrible headache to Zidane, the numbers might be a positive sign for Real Madrid's chances to lift Champions League and LaLiga silverware.
Email : [email protected]
Προηγούμενο : Cristiano Ronaldo: I just want the supporters not to whistle me | Επόμενο : Cristiano Ronaldo, Messi, and Buffon performances heat up Ballon d'Or race
Προβολές : 404
- 3389 προηγούμενη ημέρα