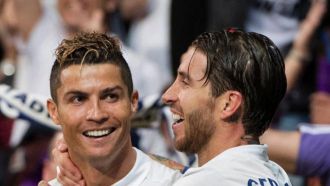 Cristiano Ronaldo: I just want the supporters not to whistle me

Wednesday, 03 May 2017
Cradling a match ball in his arms after the final whistle for the second Champions League game in a row, hat-trick hero Cristiano Ronaldo lavished praise on his colleagues for playing their local rivals off the park with a complete team effort in the first leg of their UEFA Champions League semi-final, but also had words for the hard-to-please Estadio Santiago Bernabeu faithful, who again appeared to whistle him at times.

The Portuguese headed home the opening goal just 10 minutes into the match, before bulging Jan Oblak's net with a thunderous second goal in the 73rd minute and slotting home a third in the 86th.

Atletico Madrid were unable to score an away goal, meaning the Champions League holders will go to the Estadio Vicente Calderon next Wednesday with a handsome 3-0 lead in their pockets.

"The entire team must be congratulated because they were all phenomenal," Ronaldo told a Mega reporter after the final whistle.

"We played well from start to finish, and my goals came naturally."

The goals in question mean the forward now has 400 to his name for the capital club, something he was happy to acknowledge while also sounding a note of caution.

"I'm very happy to have scored three goals in the game and 400 for my club, but Atletico are a very strong team and are in the semi-finals for a reason, so we have to maintain our concentration," he warned.

"Oblak was fantastic when we played in LaLiga and this time we managed to score, but there's one more game remaining."

The Euro 2016 champion was also asked about a gesture he made to the Estadio Santiago Bernabeu faithful after his third goal, in which he appeared to be coaxing them to substitute jeers for applause more often.

"I always try to do my best and I don't want to be whistled at," CR7 concluded

Zidane: Real Madrid have won nothing yet

After watching his charges put in a near-flawless performance on their way to earning a 3-0 victory over Atletico Madrid, Zinedine Zidane was happy to talk about the many individual and collective merits of his side, but also urged Madridistas not to get too carried away with the result.

As ever, it was Cristiano Ronaldo who provided the goals with a first-half header and a clinical second-half brace, giving Real Madrid a 3-0 advantage going into the second leg at the Estadio Vicente Calderon next week.

But his coach also expressed satisfaction at the performance of the entire team, with strong displays all over the pitch contributing to the one-sided scoreline.

"We prepared and executed our game very well, and the 3-0 scoreline reflects our superiority and the level of our performance," Zidane said in his post-match press conference.

"However we know that we have the return leg to come, and we will have to fight hard because we will suffer there without a doubt."

The Frenchman was asked whether he agreed with observers who think this was Real's best performance under his charge, but he preferred to analyse his team's performance on the night rather than compare it to past outings.

"I don't know if it was my best match as coach, but it was a great match. It's not easy to score three goals against this team," he stated.

"The first half hour of play was fantastic in terms of rhythm and technical ability, and we had many chances to score a second goal, but we managed to do that in the second half.

"The fact that we managed to keep a clean sheet and avoid conceding an away goal is very important," he added.

Ronaldo's performance was unsurprisingly high on the agenda, but the Portuguese was not the only player singled out for praise by the gaffer.

"Cristiano [Ronaldo] always has goals in him and has always been unique in that regard, and it might have helped that he was able to rest during key points of the season.

"Isco played a great game between the lines, and with Marco [Asensio] and Lucas [Vasquez] coming in, we had more depth in attack and balance in defense.

"Nacho [Fernandez] is a player who can play in any position in defense and excel no matter what, and what really impresses me about him is his level of preparation and concentration," Zidane gushed.

Depth and concentration have often been buzzwords for the 44-year-old this season, and this didn't change during his comments in the Estadio Santiago Bernabeu press gallery.

"I try to convey to all 24 players in my squad, all of whom are very good, that they are all very important for the team, and nothing changes if one player plays instead of another," he stated.

"We're all in this together, and I'll need all of them till the very end of the season."

Having finished running the rule over the triumphant result, Zidane was asked by reporters to look ahead to what the coming week has in store for his team, and ponder his future at the club beyond the summer.

"We can be happy with our performance today but we're not euphoric because we haven't won anything yet," he reminded reporters.

"There are no easy games in football, and we're going to have to be prepared to put in a perfect match at the Calderon to make it through to the final.

"For now, we can enjoy the result, rest and think about Saturday's game, which is very important for LaLiga.

"My future? I'm very happy here to be doing what I love every day, and to be working with these players."

Simeone: I say to my players and fans that a comeback is possible

Atletico Madrid were humbled 3-0 by Real Madrid in the first leg of their Champions League semi-final, but Diego Simeone remained optimistic that a comeback was possible in the return leg next Wednesday.

That match will be Los Rojblancos' final European game at the Estadio Vicente Calderon and the Argentine issued a rallying cry to the fans, urging that they could still reach the final in Cardiff.

"I don't think it's impossible," he said in a post-match interview with Mega.

"We have the return leg and I say to my players and to the fans that yes, we can."

Analysing the match, he was insistent that his team had played well in the first half, while admitting that their rivals overran them towards the end.

"The first half was even and we could have gone in front at the one-versus-one between [Kevin] Gameiro and Keylor [Navas]," he pointed out.

"I liked the way the team played in the first half, but later they knew how to attack the spaces well."

He was also asked about Cristiano Ronaldo's first goal and whether or not the forward interfered with play enough to be offside, to which he said that all that matters is what appears on the scoreboard.

"I saw it as a goal," he said, dodging the question.

"When it enters in the goalframe and the referee points to the middle it is a goal."

Finally, makeshift right-back Lucas Hernandez's performance was also brought up and the coach defended his player by saying that he was playing out of position.

With victory in the first-leg of their semi-final with Atletico Madrid, Real Madrid have moved significantly towards the final in Cardiff, the win also marking an impressive 36 consecutive Champions League matches at the Estadio Santiago Bernabeu in which they have scored.

Zinedine Zidane's charges have become renowned for breaking and setting records in recent years and Tuesday evening was no different.

In all competitions it is 59 matches in a row in which the club have scored at least once, closing in on Bayern Munich's record of 63.

Specifically in the Champions League you have to go all the way back to April 2011 to find the last match at the Bernabeu in which Real have failed to find the net.

That was the 2-0 defeat to Barcelona in the semi-final which prompted Jose Mourinho's staggering 'Unicef' rant.

Los Blancos lead the way in terms of a home goalscoring record with their nearest competitors being Chelsea who scored in 23 consecutive home Champions League matches at Stamford Bridge.

Juventus follow with 21 whilst the club's fierce rivals, Barcelona could only manage 20.

Koke: With Ronaldo playing, Atletico beat Real 4-0 at the Calderon

Atletico Madrid fell to a 3-0 first leg defeat at the Estadio Santiago Bernabeu on Tuesday night, but Koke refused to consider the tie as over and insisted that anything can happen in football.

Asked just how difficult it is to go up against Real Madrid when they have the night's hat-trick hero Cristiano Ronaldo up front, he pointed out that Los Rojiblancos have gotten the better of the No.7 on other occasions.

"You never know in football," he said in a post-match interview.

"With Ronaldo playing we beat them 4-0 in the [Estadio Vicente] Calderon.

"This is football [so I wouldn't rule out a comeback], just ask PSG."

The midfielder also apologised to the Atletico fanbase and promised to keep fighting for them.

"We must ask for forgiveness from the supporters and start thinking about Wednesday," the 25-year-old said.

"We want to be in another Champions League final and we'll give our all.

"We'll never stop fighting and we always pick ourselves back up after a tough setback."

Finally, he explained that as much as the defeat hurt, it was not as heartbreaking as the losses in Lisbon and Milan.

"It is worse to lose two finals than a semi-final," he said after the match.