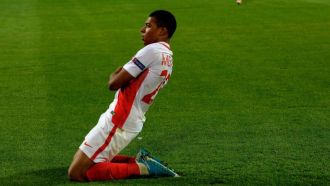 Mbappe's agent: Only four teams can afford him

Friday, 28 April 2017
The future of Kylian Mbappe is starting to become a little clearer after his agent claimed only four teams can afford him.

He is one of the most sought-after players in world football after his sensational breakthrough season.

His representative, Pascal Boisseau, told L'Equipe there are not many sides out there who could sign the 18-year-old.

"Only four teams in world football could buy him right now," he said.

However, Boisseau warned it would be better for Mbappe to stay with the Ligue 1 leaders for another season at least.

"It wouldn't be the best thing for him to leave Monaco this summer," he added.

"Right now, he's flying, and there isn't a youngster at his level.

"On top of that, even if he has a dip next season, Monaco will still have offers of 100 million euros."

Despite making nine changes for Real Madrid's trip to Deportivo, Zinedine Zidane has a clear idea in his mind who is best XI is for the big games.

His 'B' team produced an emphatic performance and a stunning 6-2 victory but Zidane will turn to his tried and trusted A-listers for the Champions League semi-final ties against Ateltico.

Cristiano Ronaldo, Gareth Bale and Karim Benzema will return to the fold, despite the impressive goal scoring form of Alvaro Morata and the positive showings of Marco Asensio and Lucas Vazquez.

The latter duo, as well as Mateo Kovacic, James Rodriguez deserve to play but then so do Luka Modric, Toni Kroos and Casemiro - and they have done nothing to warrant being relegated to the bench.

Even in defence, Nacho has made his case to play alongside Sergio Ramos, who missed the win over Deportivo through suspension.

Yet, with Raphael Varane back and available, he may have to return to the bench.

In the summer, Zidane will ring in the changes but, for now, he will stick with the same first team.

Isco showed again in the recent victory over Deportivo just how important he has become for Real Madrid. It was an exhibition at the Riazor, but it's just the latest in a long line of good performances by the ex-Malaga man this season.

Isco scored a brace in an emphatic victory which kept up the pace on then leaders, Atletico Madrid. His second goal in particular was special.

Cristiano Ronaldo scored a hat-trick and stole the headlines, but Isco was pulling the strings from midfield. He controlled the game and helped Real Madrid net a vital win.

Another dominant performance from Isco in a game where the scoreline doesn't quite reflect the events on the pitch. Real Madrid were 1-0 up and rocking until the ex-Malaga man settled any nerves with the second five minutes from time.

Arguably his best performance to date. Isco scored twice and was central to anything Los Blancos did well, capping it off with a stoppage time winner.

Was included in the 'B' team at the Riazor, but produced another masterclass. On the scoresheet, but was orchestrator-in-chief for Zinedine Zidane's men.

It's not just for Real Madrid where he's shone. He even inspired La Roja to a comeback draw at Wembley, with the equaliser six minutes into stoppage time.

The argument should certainly exist that Real Madrid's reserve options, those which Zinedine Zidane calls upon when in need of rotation, have the collective talent to beat their first-choice counterparts. Gareth Bale should not be risked when the Frenchman boasts a large armoury.

Against Deportivo, once again, the likes of Lucas Vazquez, Alvaro Morata and Mateo Kovacic were forced to play for their relevance in the first-choice picture at Los Blancos, due to their current position of sitting a long way down the pecking order at Estadio Santiago Bernabeu.

Isco, James Rodriguez and Marco Asensio also continued to figure as talented, yet frustrated, protagonists who should be getting more minutes in LaLiga. Each fortnight, when Zidane is forced to make wholesale changes to his starting line-up due to a previously draining encounter, they stake the same claim: they should be his Plan A.

Instead, Real Madrid lined up for El Clasico last weekend with Bale, despite fitness concerns that have plagued him since November. The 27-year-old was deployed on the left-hand side, before rapidly finding himself switched over to the right. Before the 40-minute mark had even come around, he was forced off due to injury.

Risking the physical wellbeing of a player is but the first faux pas. It seemed so needless, not least due to the fact that Bale has struggled to make a consistent impact when featuring for Los Blancos over the last couple of months, but also that Isco, James and Marco Asensio have been offering good performances with regularity whenever they have been given the opportunity to impress.

Wednesday's 6-2 victory at Riazor only underlined this fact. Real Madrid's 'reserve' attacking options are supremely gifted and arguably would function far better than their trio of teammates called BBC have managed to this season.

Rather than accommodating for Karim Benzema and Bale's lack of consistency, which leaves the team as a whole vulnerable when the front three fade, there seems to be no excuse as to why James nor Marco Asensio were not chosen to feature out on the right on Sunday evening.

Cristiano Ronaldo has stepped up with some vital goals recently, with his training and physical fitness based around the Portuguese forward being at the top of his game over the next month or two, but the same cannot be said of Benzema nor Bale. They are replaceable and this should be acted upon, with the latter's short-term unavailability taking what should be Zidane's long-term decision for him.

Isco is playing with a silky confidence, as highlighted by his neat midweek finish and a whole highlight reel of intricate pieces of skill. It oozes out of his very pores, with such a calm belief in his own ability transferring to the teammates around him. There is no arrogance to be found, just an awareness that he is playing his best football to date.

Marco Asensio, meanwhile, has to be prioritised ahead of Bale. It is the responsible thing to do, while respectfully acknowledging that the Welshman was fantastic last season.

Living in the present, it is unrealistic to assume that Real Madrid will be able to use Bale regularly without injury problems arising, while his young teammate is playing with confidence, can offer incredible pace while dribbling and isn't fazed in the slightest by the big occasions. After his loan spell was a success at Espanyol, he showed that he is ready - and recent performances against Bayern Munich and Barcelona only continue to state the obvious.

Away from their impressive showings on the field of play, their attitudes speak volumes too. James' recent celebrations have consisted of a gesture that suggests the Colombia international is only focused on staying at Real Madrid, while there has never been any doubt that Isco and Marco Asensio aren't working hard to play a bigger role at a club which they love.

The desire to hold down a first-team place is there, as is the work ethic to make a starting spot their own. All that remains is for Zidane to come around to the idea that his front three could need an overhaul. After the balanced attacking showing at Riazor, change should be in the offing.

Torres: Atletico can compete with anyone and are not afraid of Real Madrid

There will be no fear in the Atletico Madrid team when they face Real Madrid for a place in the Champions League final, according to Fernando Torres, despite Los Blancos' edge over their local rivals in European meetings.

When taking questions from the press, Torres was asked if he felt the tie was similar to the 2011/12 semi-final where his underdog Chelsea side dispatched Barcelona en route to their maiden title in the competition.

"It serves as motivation, because we know who we are and we can compete against anyone. We are not afraid of anyone.

"It will be very difficult, but we have the confidence that we can reach another final with humility and sacrifice.

"One moment can change everything so you have to be prepared. [Against Barcelona] I was not in the starting line-up bit in the end I scored the key goal."

As for where the pressure will lie across the double-header, which kicks off on May 2 at Estadio Santiago Bernabeu, Torres believes Atleti's experience is in contrast to the youthful exuberance that the likes of Marco Asensio have brought to Real.

"Real are a team that always have huge depth and they have young players with hunger," he continued.

"This illusion of youth compensates for their lack of experience and it's the Madrid players who are playing less that are doing better.

"The only pressure comes from within. We are up against a great team and the goal is to win and reach a Champions League final.

"Over the last few years, we've become used to playing for these huge goals and the team won't feel any more or less pressure for facing Real in a semi-final. It depends on how much we want it."
Email : [email protected]
Προηγούμενο : Belgian media put Hazard in a Real Madrid shirt | Επόμενο : Messi catching up to Cristiano Ronaldo in Golden Boot and Pichichi trophy haul
Προβολές : 515
- 3359 προηγούμενη ημέρα