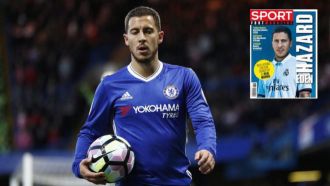 Thursday, 27 April 2017
Real Madrid have reportedly not given up on their pursuit of Chelsea's Eden Hazard, and Belgian media have even gone as far as publishing pictures of him wearing the Los Blancos shirt.

It's also alleged that the player met with Real's general manager, Jose Angel Sanchez, in November, to discuss a move to the Spanish capital.

Sport Foot Magazine were the ones to put Hazard on their cover, and they remain convinced he will move during the summer.

James: The second string have to take the opportunities when they are presented

After Real Madrid had demolished Deportivo La Coruna 6-2 at the Estadio Riazor, James Rodriguez suggested that the second string, those players who often don't get a look in for Los Blancos, play well because they have to take advantage of the opportunities they are given.

Isco, Lucas Vazquez, Alvaro Morata and James were all on the scoresheet in a vital win that allows Real to draw level again with leaders Barcelona.

"I don't know, maybe it's because we play a little and when we have those small opportunities we can do good things," he said.

After his goals, the celebration that was first seen in El Clasico was repeated.

"The celebration is for my daughter, she is 4 years old," James continued.

Looking ahead to the end of the season, the Colombian was clear as to the mindset required.

There are five matches and all will be finals for us," he said.

"We will have to face them all - and the Champions League semi-finals - with great desire."

Luis Enrique: Trust in Malaga? If my grandmother had wheels she would've been a bike

After Barcelona's 7-1 destruction of Osasuna, Luis Enrique was again in humorous mood in his pos-match press conference, even marking a guarded remark about his grandmother when asked if the Catalans could rely on Malaga beating Real Madrid in the last game of the season.

"If my grandmother had wheels, she would be a bicycle," he said to reporters, indicating that he had no confidence in Malaga springing a surprise.

Looking back over the win against Osasuna, the coach was pleased with the contribution of the first-team's fringe players.

"This is going to improve Paco Alcacer and Andre Gomes' confidence," he continued.

Javier Mascherano scored his first goal for the club at the 319th time of asking and it clearly delighted everyone at the club.

"It is an anecdote that a player like Mascherano had not scored a goal," he said.

"He is a top player, his performance is beyond doubt, he is a born competitor who makes his team better."

This time Manchester derby is all about points not managers

If the first Manchester derby of the season was excessively dominated by the focus on a fascinating coaching rivalry, Thursday's encounter is strictly business.

This time, few care about the Pep Guardiola-Jose Mourinho head-to-head records or their previous meetings in Spain's La Liga.

The stakes are high - City are fourth in the Premier League, just a point ahead of United after the same number of games.

Both clubs are desperate to ensure a top-four finish and Champions League football next season and Thursday's clash at the Etihad Stadium will be influential in determining how the pair end their campaigns.

"This is about the clubs, the teams, this is about the positions at the end of the season. This is not about myself and Guardiola. I think now that is the correct approach," Mourinho said this week, reflecting on the hype around the last derby.

Still, given their stature in the game, it is impossible for the two coaches to be completely out of the picture.

Guardiola's first campaign at Manchester City risks ending in the worst Premier League finish for the club in seven seasons. City have not ended a campaign out of the top four since coming fifth in 2011 under Roberto Mancini.

Sunday's extra-time defeat by Arsenal in the FA Cup semi-final saw the last chance of silverware disappear after City's loss to Monaco in the Champions League last 16.

Former Barcelona and Bayern Munich coach Guardiola has never endured a trophy-less season as a coach and, while City's hierarchy will write this year off as a transitional phase, there will still be some surprise that he has achieved less than his predecessor Manuel Pellegrini.

United, who lost 2-1 in the first league meeting with City, have steadily progressed under Mourinho.

They have already lifted the League Cup and are 23 league games unbeaten while having a chance of more silverware - and a Champions League place - through the Europa League where they face Celta Vigo in the semi-finals.

While United have lost top scorer Zlatan Ibrahimovic and key defender Marcos Rojo to long-term knee injuries, there is a real mood of optimism at Old Trafford.

"It's going to be the game of the season," said United's Spanish midfielder Ander Herrera.

"We are in a very good moment, on a very good run and we respect them, but we are doing a lot of good things and we have to show it on Thursday," he said.

The long season fighting on several fronts has taken its toll on both teams however.

As well as Ibrahimovic and Rojo, Mourinho, who has been rotating his squad, must wait to see if Paul Pogba is fit after he was substituted late in Sunday's 2-0 win at Burnley.

For City, leading scorer Sergio Aguero and playmaker David Silva are battling to be fit while Brazilian striker Gabriel Jesus could return after a long-term injury.

As a former Espanyol player and coach, Pochettino reminded of the city rivalries that exist between Barcelona and Los Periquitos, with the derby taking place this Saturday.

"He's in a period when he loves to talk, he [plays] in Doha and listen, he was a Barcelona player, he's my enemy," the Argentine told Sky Sports. "He tried to destroy our focus on winning because he hates me, because he's Barcelona.

"I know him very well, I played against him a lot and when I was a manager."

Recalling an incident in a December 2009 Catalan derby, Pochettino claimed Xavi had dived to win Barcelona a penalty as an example of his dishonesty.

"Yesterday there was Thierry [Henry] here [at Spurs] and we remembered the game when [Xavi] cheated the referee," said Pochettino. "He fell down, it wasn't a penalty, but [Zlatan] Ibrahimovic scored for Barcelona and they won the game.

"The marker was Raul Baena, Xavi fell down and said 'penalty', they gave a penalty.

"After, in the replay, it was very funny because no one touched him and everyone in the media was saying no, no trust me - it was a penalty. Come on. It goes from lie to lie to lie.

"He is working for Manchester City, maybe? He wants to help Guardiola and [Vincent] Kompany."

Inter have offered Diego Simeone whatever he wants to take over from the beginning of next season, but the Argentine has rejected their advances.

Piero Ausilio, the Milan-based club's sporting director, was in Madrid last week to meet with the current Atletico coach's representatives and inner circle, only for Simeone's response to be a definitive 'no.'

Out of respect for his relationship with directors at the club he used to play for, he was willing to listen to their offer.

However, the 46-year-old wants to lead Los Rojiblancos to their new stadium this coming summer and, unlike this time last year, he has already decided that he'll stay for the following season.

From the Serie A club's point of view, their owners Suning are desperate to return Inter to the top of Europe and their coaching search continues given that Stefano Pioli is unlikely to remain in the post.
Email : [email protected]
Προηγούμενο : De Gea knows he can leave Manchester United | Επόμενο : Mbappe's agent: Only four teams can afford him
Προβολές : 498
- 3383 προηγούμενη ημέρα