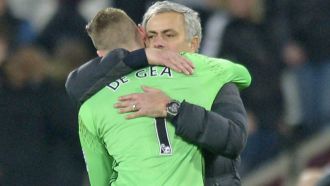 Wednesday, 26 April 2017
Jose Mourinho will not stand in the way of any Manchester United player who does not want to stay at the club and the Portuguese boss has told David de Gea, Ander Herrera and Zlatan Ibrahimovic as much, with speculation surrounding their futures at Old Trafford.

The former Real Madrid coach will be given the task of setting an ask price for any players linked with moves away, and negotiations would only start should a figure be reached that the Special One believes is fair and in the interests of this season's EFL Cup winners.

Mourinho will not keep any of his players against their will, nor will he gift any of his players to another club beneath what he believes is market value, as United continue in their hunt for a first Europa League title and qualification for next season's Champions League.

Madrid are aware that United are prepared to lose de Gea in the summer, but a deal has not been reached between the two clubs.

Zinedine Zidane is known to be considering the possibility of acquiring a new goalkeeper in the transfer window, and de Gea is understood to be his first choice for the no.1 shirt at the Estadio Santiago Bernabeu.

The former Atletico Madrid custodian signed a new deal with United in 2015 after a proposed move to Los Blancos fell through at the last minute.

In that contract was a clause for Madrid to have first refusal on the Spain international for a fee of no less than 50 million euros.

Now, however, Madrid president Florentino Perez would have to table a sum in the region of 60 million euros to acquire the 26-year-old's services.

Should de Gea remain at United, it is understood that Zidane has targeted Chelsea's Thibaut Courtois and AC Milan's Gianluigi Donnarumma as other options.

De Gea is awaiting a development on his future and while he is happy plying his trade in the Premier League, he is thought to be considering a move back to Spain after leaving the Estadio Vicente Calderon in 2011.

For now, though, he is focussed on United's remaining fixtures this season.

Madrid's current keeper, Keylor Navas, is viewed as a good professional by the Estadio Santiago Bernabeu hierarchy and they've been impressed by a string of good performances from the Costa Rica international.

When the season reaches its conclusion, they will speak to the 30-year-old and analyse the situation from there.

Real Madrid midfielder Isco's new contract means that James Rodriguez is likely to leave the club in the summer.

A five-year-deal for the former and Marco Asensio's impressive run of form have rendered the Colombian international surplus to requirements at the Estadio Santiago Bernabeu.

Zinedine Zidane has tried to balance that attacking trio in his squad for some time but club officials have now deemed doing so impossible for another season.

For some time it had been reported that one of the three would be leaving the club, and Isco's deal - which will keep him at the club until he is 30 - concludes speculation as to who will be heading out of the exit door.

It's a reward for a player who has provided some standout performances, including a brace against Sporting to put his side in the driving seat in LaLiga's title race.

Eden Hazard's proposed move to Zinedine Zidane's side from Chelsea when the transfer window opens has also been thrown in doubt.

The Belgium international had been on Los Blanco's radar but the feeling in the Spanish capital is that there is no room for the Blues' no.10 in their plans now.

Asensio's string of eye-catching performances of late have catapulted him into the forefront of Zidane's ideas for next season, and it is thought that the 21-year-old may even threaten Gareth Bale's position in Madrid's starting line-up.

Lionel Messi's last-gasp winner in the Clasico certainly silenced the Estadio Santiago Bernabeu and it sent Cristiano Ronaldo into a fit of rage.

After TV cameras captured the Real Madrid winger's anguish on the pitch, he soon took it behind closed doors and ranted in the dressing room.

Subject of Ronaldo's ire was the failure of his teammates, namely Luka Modric and Marcelo, to stop Sergi Roberto's 50-yard run that began the counter-attack which sealed the game.

Much emphasis was also placed on the general defensive structure that Los Blancos set up with in stoppage time, as Ronaldo had demanded maximum pressure to win the ball from a Barcelona throw-in by their own corner flag.

However the Blaugrana broke out to bag the winner, and it was Marcelo who fronted up to the media in the aftermath: "I take the blame for the last goal but it can happen to anyone."

As the LaLiga run-in comes to a head, Luis Enrique has admitted that he'd much rather be in the Champions League than have a few days extra rest.

Real Madrid are now second in the title race but have a game in hand, along with a tricky semi-final against local rivals Atletico Madrid.

"I wish [Barcelona] had that fixture list too," Luis Enrique told reporters. "That would mean we'd still be in the Champions League.

"It's clear we all still have difficult games. The matches from here on in are more of a threat, and we have had problems with lower placed teams throughout the season, so [facing Osasuna] will be a tricky game.

"I do not feel that [Real's run-in makes them favourites]. They have played a game less and it will be difficult for us both, and of course there will be surprises."

Victory at the Estadio Santiago Bernabeu has the Catalan club in good spirit ahead of taking on bottom club Osasuna, and the coach has called for his players to be consistent in the remaining games.

"Clearly, it has a significant psychological value, and it is clear that for us it has been an important morale boost that will serve as a stimulus from here to the end of the season," he continued.

"Obviously we need to be very consistent from now until the last moment."

The Asturian also threw his weight behind Lionel Messi's controversial celebration on Sunday night, the forward having been described as the world's best ever player by his boss.

"No one can explain it better than [Messi], but it seemed fair and correct to me," said Luis Enrique.

The Osasuna game kicks off at 19:30 CET from the Camp Nou on Wednesday night.

As the transfer window edges closer, Real Madrid may consider the lack of contract discussions between Chelsea and Eden Hazard to be in their favour when it comes to their hopes of signing the Belgian.

MARCA have long detailed the mutual admiration between Los Blancos and the winger, with a potential deal to be thrashed out in the summer.

"There is no sign of a new contract for the moment," Hazard told Sky Sports. "I am focused on the last month and we will talk later.

"It's not on my mind now. I have two or three years left. I just want to finish the season well and we will see afterwards."

Hazard went on to discuss how he can change his game to continue to his development and hit the level currently occupied by Cristiano Ronaldo and Lionel Messi.

"A lot of people say to me you need to be more selfish, but when I am on the pitch sometimes I prefer to pass the ball," he continued.

"I try game after game to be more selfish.

"I know it's good for me to score more goals if I want to reach the level of Messi and Ronaldo. I am working on it."

It remains to be seen who will take charge of the Argentina national team when they take on Brazil in Australia in June, but Diego Maradona has expressed his concerns over Jorge Sampaoli's suitability for the role.

The current Sevilla coach has long been the favourite to replace Edgardo Bauza and to try to lead the Albiceleste to the 2018 World Cup, but Maradona is unconvinced.

"I'm not sure [about him taking the job]," he said in an interview with Rivadavia radio station. "The [appreciation] of Sampaoli is inflated.

"With Chile he was having an amazing career.

"Sevilla aren't slowing down and I think he is a candidate [for the Argentina job], but I don't know if that's fair.

"There is a lot being said about cleaning up the Argentine national team, but I don't think Sampaoli has the feel for it or the connection with the players."

Maradona, who coached the team to the 2010 World Cup in South Africa, also refused to completely rule his name out of contention.

"It's not that I'm offering myself for the job, but I'm saying that the coach inside me hasn't died and that the smell of the pitch continues to attract me like the smell of a pretty woman."

As for alternative candidates, the 56-year-old explained that his role as a FIFA ambassador prohibited him from suggesting any.
Email : [email protected]
Προηγούμενο : United are ready to negotiate the sale of De Gea to Real Madrid | Επόμενο : Belgian media put Hazard in a Real Madrid shirt
Προβολές : 419
- 3411 προηγούμενη ημέρα