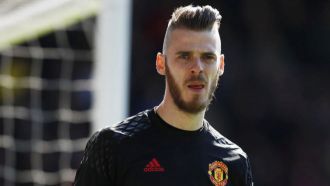 Tuesday, 25 April 2017
In news that is bound to excite Real Madrid supporters and disappoint Manchester United's fans, it appears that the Red Devils are now willing to negotiate a transfer for David de Gea to move to the Spanish capital.

The 'will-he, won't-he' saga therefore seems to be moving towards a successful conclusion after a similar move broke down because of an alleged late filing of paperwork.

Carvajal to Suarez: This is the home of the Champions

TV cameras picked up an ugly altercation between Real Madrid's Dani Carvajal and Barcelona's Luis Suarez at the end of El Clasico, the former reminding the latter where he was.

After 90 minutes of intense battle, the Spaniard sought out the Uruguayan after the final whistle.

"This is the home of the champions," he mocked.

Zidane stands alone because of his reliance on BBC

Whenever Real Madrid face a rival or play in a so-called big match, Zinedine Zidane chooses to pick Gareth Bale, Karim Benzema and Cristiano Ronaldo no matter what form the trio are in, or whether they are injured or not.

Since the Frenchman took charge of his first training session, the three strikers have always been the solution and it seems he cannot leave them out of his eleven regardless.

Sixteen months have now past and Zidane refuses to change his ways, yet the rest of the squad believes there are better alternatives depending on the situation.

Even when the group feel that one or all of BBC seem injured, the coach doubts this and continues to select all three.

Zizou will carry on playing them until the end of the season, taking full responsibility for his decisions.

Many members of the squad feel the time has come for BBC to feel some pressure and regardless of their big names they should be dropped when they're not playing well.

Just like before when Benzema lost weight and came back stronger, Bale`s case is different as his injuries have played a huge part.

Last season no one dared to mention that they should start in front of the three, but now players like Marco Asensio, Lucaz Vazquez and Isco feel they have earned the respect from their performances to warrant a starting place.

Zidane still has the confidence from all involved, but he knows losing El Clasico to Barcelona has damaged Madrid`s LaLiga chances.

Los Blancos' fate is now in their own hands, but Sunday`s defeat has complicated things and is hard for them to digest.

Pique at the Bernabeu: Barcelona are better, infinitely better

One person was in no doubt at all that Barcelona were superior to Real Madrid in every department during Sunday's El Clasico; Gerard Pique.

The centre-back was in the eye of the storm for much of the game, incessantly booed by the home support and then blamed by Sergio Ramos for the Real Madrid captain's sending off.

However, Pique had the last laugh and also had a message for his teammates.

"We are better [than Real Madrid]," he kept repeating.

Following on from Sunday's FA Cup defeat to Arsenal, Manchester City, with the league also out of reach, look set to end the season trophy-less. Coach Pep Guardiola will now be drawing up his potential transfer targets, and the Spaniard will be given a hefty budget for the summer.

With City still fighting it out for a top-four Champions League finish, the Spaniard is set to have around 295 million euros to spend. In his first year in charge, the coach had already splashed 213m euros on Leroy Sane, Gabriel Jesus, John Stones, Ilkay Gundogan and Nolito.

Sergio Aguero, David Silva, Kevin De Bruyne, and Raheem Sterling will all still be key players going into Guardiola's second season, but he feels he needs to add new faces.

"We are going to get better, some players will stay but others will leave," he explained to the press. "Next season we need to be stronger.

"To be at the top-level like Chelsea and Tottenham, we have to improve in the right areas."

City players out of contract this summer

Man City have struggled for goals at times this campaign, and are the lowest scoring side in the top-four, with only 63 goals.

The right-back spot has been a headache for the coach all year, with Jesus Navas filling in at times whilst Fernandinho has also played there after Pablo Zabaleta and Bacary Sagna failed to impress their new boss.

Both are set to leave Manchester in the summer as their contracts are up and won't be renewed, with Kyle Walker of Spurs and Hector Bellerin (Arsenal) both on the wish list according to The Sun.

As for the left hand side, Monaco star Benjamin Mendy has been a name mentioned given that Gael Clichy looks set to depart, due to no contract renewal.

Southampton's giant defender Virgil Van Dijk is the favourite option to come in to the centre of defence, a position in which Stones and Nicolas Otamendi have been regulars.

Willy Caballero's contract is another ending in the summer, and despite keeping Claudio Bravo out of the team, it looks increasingly likely the Spaniard will move on with a new goalkeeper potentially another area being looked at.

With Gundogan injured for most of the season, Fernandinho has been at the heart of the midfield along with Yaya Toure but the Ivorian's contract expires in June and he could be looking for a new challenge, so Corentin Tolisso of Lyon is being targeted.

Alexis Sanchez would be the icing on the cake for City, were he to sign, and having already brought him once before when in charge at Barcelona, Guardiola has made it no secret that he is an admirer of the Chilean.

"[Sanchez] is a fantastic player, for me he is just one step behind [Lionel Messi]," the Spaniard said.

Sunday's exit of the FA Cup, now means Guardiola, for the first time in his managerial career will not win a trophy in his first season in charge.

Former Sevilla sporting director, Monchi, has taken up the same position at Italian side AS Roma on a four-year deal, with the option for a further year.

After 17 years in the same role at the Andalusian club, the transfer guru will start work with the Serie A outfit immediately, having left the Estadio Ramon Sanchez Pizjuan last month.

"On behalf of myself and the entire AS Roma team, we welcome Monchi to our family and look forward to a long and fruitful relationship as we begin an exciting new era at the club," said the Giallorossi president, Jim Pallotta.

"I couldn't be happier with this appointment as Monchi is widely regarded as one of the best minds in world football."

Ramon Rodriguez Verdejo, Monchi's real name, joins the side second in Serie A after months of speculation surrounding his future.

"I would like to thank Roma president Jim Pallotta and the club's executive team for giving me this opportunity," the 48-year-old said.

"This is an exciting project and I look forward to serving the supporters, staff and players at this iconic club for many years to come."

Chelsea midfielder N'Golo Kante has developed his passing skills this season but needs to keep improving despite being named Professional Football Association's player of the year on Sunday, manager Antonio Conte has said.

The 26-year-old France international's ability to break up play has been key to Chelsea's hopes of winning the Premier League title this season, with the midfielder making 110 tackles and 72 interceptions.

"He is always working to improve his weaknesses and I hope he continues in this way," Conte told in a news conference on Monday.

"The most important thing is for the player to give continuity of performance. N'Golo has been doing that last season and this season.

"He shows great ability to win the ball and also I think he has improved a lot with the ball. He is able to find the first pass in a vertical way and not only in a lateral way."

League leaders Chelsea have an opportunity to provisionally extend the lead over Tottenham Hotspur to seven points when they host ninth-placed Southampton on Tuesday.

Defender Gary Cahill has recovered from illness but a final decision on his fitness will be made ahead of the kick-off on Tuesday.

"It is normal to check his condition and also I want to speak with him (Cahill) tomorrow," Conte added.

"In this case, I will be very happy if he is able to play tomorrow but also I want to underline Ake's performance. He played a very good game."

Following the Southampton clash, Chelsea visit Goodison Park to face sixth-placed Everton on Sunday.
Email : [email protected]
Προηγούμενο : Marcelo: I take the blame for the last goal but it can happen to anyone | Επόμενο : De Gea knows he can leave Manchester United
Προβολές : 403
- 3161 προηγούμενη ημέρα