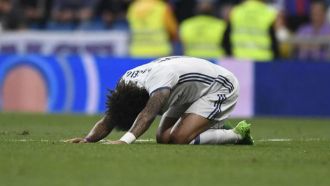 Marcelo: I take the blame for the last goal but it can happen to anyone

Monday, 24 April 2017
Real Madrid's charge to the LaLiga title was derailed somewhat by Lionel Messi's historic brace and Marcelo has admitted that he will take the blame for the Argentinian's injury-time winning goal.

Defeat in the Clasico leaves the two teams level on points at the top of the table with Barcelona positioned first as a result of their head-to-head record against Los Blancos.

Messi's final strike was a moment of counter-attacking brilliance after Marcelo failed to prevent the move near the halfway line.

The Brazilian made clear that he was taking full responsibility for the goal in his post-match interview.

"It was a mistake, it could happen to anyone but I take the blame for the goal," he explained.

What is likely to frustrate Zinedine Zidane is the nature of the third goal as his side were caught attacking far too high up the pitch.

"We attacked at 2-2 because we felt that the further away the ball was from our goal, the better," Marcelo continued.

Sergio Ramos' dismissal was the main flashpoint of the evening and the Spanish defender was livid at the decision taken by Alejandro Hernandez Hernandez.

Marcelo however refused to comment on the officials with his focus simply on the club's remaining matches.

"I don't really want to talk about the referees," he said.

"I don't think this will impact us in the title race but we want to have all the players available."

Gareth Bale was rushed back for the meeting with Los Cules and the Welshman didn't last the first-half as he was forced to come off through injury, although the Brazilian wasn't sure of the details.

"He had a problem, that is why he was substituted but I haven't had time to ask yet," he noted.

Luis Enrique: Messi is the best ever

He may well be entering his final weeks as Barcelona's coach but Luis Enrique masterminded a 3-2 victory over Real Madrid before labelling Lionel Messi as the best player in history following his two-goal haul at the Estadio Santiago Bernabeu.

Goals from Casemiro and James Rodriguez were cancelled out by the aforementioned Messi brace and a wonderful strike from Ivan Rakitic.

The result itself blows the LaLiga title race wide open with intense pressure placed on Los Blancos shoulders for their remaining matches, including the game in hand away to Celta Vigo.

Enrique cut a jubilant figure after the full-time whistle and he made clear in his post-match press conference that the Argentine was like no other.

"He is the best player in history, he is incredibly decisive at all times and I have seen a lot of football, it is a great pleasure for all Cules that he is one of us," he explained.

Despite both teams having played intense Champions League matches in mid-week, the Clasico was an energetic affair with the end-to-end nature of the match unlikely to have appealed to the defensive purists.

The Asturian coach was acutely aware of the physical nature of the match and suggested it was a sign of two teams giving absolutely everything to their respective cause.

"It was a match between two wonderful teams that gave everything to win and in truth either side could have been victorious."

St.George's Day holds significance in Catalonia and the 46-year-old believes the momentum Barcelona's injury time winner will create was fitting of the date and could give them hope in the LaLiga title race.

"The fact we made it 3-2 in the 92nd minute gives us a huge morale boost, it is a great day for all Catalans on St.George's Day."

Marcelo was expected to have an impact on proceedings and Enrique was quick to praise the Brazilian as a player who was a constant menace down the left-flank.

"Marcelo is a special player, he generates danger with few touches and this is one of his great attributes, I do not need to say anything more about him."

What was bizarre about the eventual winning goal was just how far forward Los Blancos were in attack despite having earned a positive result.

In contrast the former Roma coach suggested that it was the Blaugrana who needed to push for the victory.

"We have defended well throughout the match but we were ready to draw at the end, however that would have been a missed opportunity on our part," he said.

Zidane: When you get back to 2-2 with 10 men you have to think a little more

Lionel Messi struck in stoppage time to deal Real Madrid's title hopes a vicious blow in El Clasico, with Zinedine Zidane left wondering how his players had thrown a point away after battling back from 2-1 down without Sergio Ramos.

His talismanic captain received a straight red card for a rash two-footed lunge on Messi, which left his team in the lurch. After a goal from Ivan Rakitic left Los Blancos in trouble, substitutes James Rodriguez appeared to have got the job done - until disaster struck.

"We cannot be happy," Zidane explained at the post-match press conference. "We made a lot [of chances] during the whole game. We had many goalscoring chances, but couldn't bring the game under control.

"When you don't kill the game off, this can happen, and it did.

"We are disappointed with the result, when you get back to 2-2 with 10 men you have to think a little more and defend together."

Cristiano Ronaldo was one of the players that had the chance to make it 3-2 and put one hand on the LaLiga title for Real Madrid, but it didn't come to pass.

"We thought that we could grab a third goal," he said. "From a throw in we were out of position, and what happened happened.

"I have to look at the game again but I wouldn't have changed anything. There is a lot of the league left and we have to think about the next game.

"Messi made the difference for his team. Today he has scored two goals, but it is not only Messi.

"We didn't control the game well in the moments that we could have done damage to our opponent.

"That they've hurt us is logical in any game."

Ronaldo is believed to have been left frustrated by his teammates' inability to hang onto a result which would have put Los Blancos in the driving seat to take the Spanish championship.

The former Manchester United forward was pictured looking to the sky whilst Messi celebrated defiantly in front of Madridistas at the opposite end of the pitch.
Email : [email protected]
Προηγούμενο : Messi's blackout | Επόμενο : United are ready to negotiate the sale of De Gea to Real Madrid
Προβολές : 493
- 3352 προηγούμενη ημέρα