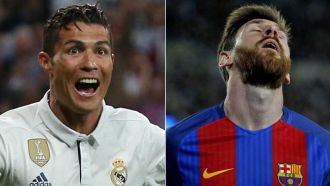 The secret to Cristiano Ronaldo's success

Friday, 21 April 2017
Cristiano Ronaldo is an insatiable footballing machine, something that he has shown throughout the last decade and he promises to continue for a few more years at Real Madrid.

As if there were any doubts, all one needs to do is look back at the Champions League knock-out phase against Bayern Munich.

For the first time, he has been admitting that he is looking after himself carefully, that he isn't spending every hour possible on the training field. This is another Cristiano Ronaldo, both mentally and now physically. He is taking the steps to completely reinvent himself, convinced that he has reached the point where he must change to keep performing at the same level.

After Euro 2016, Cristiano Ronaldo decided that he had to reshape himself, to change, to change his style. It was a personal decision, not a medical one, nor one from the physios who do everything that they can in order to help him physically. The Portugal international put himself on a special diet, and from getting on the scales at 82 kilograms he started the season at 79 kilograms.

With this change, the striker wanted to regain some of the freshness that he had previously felt in football. He felt a little heavier and wanted to shed some weight, to feel as he always had done previously on the pitch.

Hand in hand with the choice to put himself on a fitness regime came a change to his daily workload. He had previously worked on his physique, to levels which some players would have found worrying. Carlo Ancelotti, for example, was not a fan of working in the gym without any control, and due to this he slowed Alvaro Arbeloa right down. Some coaches believe that building excessive strength and muscle is the best option, as it gives more speed and agility on the field of play.

This change, with the objective of reaching the end of the season at his peak, came with the intention of building training and work up slowly. He looked to come into the final months of the season at 100%, something which he hasn't been able to do since 2013.

Ronaldo has arrived in April without any physical problems, with less muscle, but with the positive feeling of moving much easier on the pitch. He isn't the same size as in previous years, he now looks more like a traditional footballer, but his goals against Bayern as more of a No.9 have highlighted what he can do with his intuition and speed.

Ronaldo knows that he still has room to improve, and rather differently to previous years he doesn't feel any physical problems. It has done nothing to distract him from continuing to score goals and fighting for a double that Real Madrid haven't won since 1959. Cristiano Ronaldo believes that he can still make history at the club.

Real Madrid progressed to the Champions League semi-finals thanks to Cristiano Ronaldo, who appeared with five goals against Bayern Munich when it mattered most, at the same time as Lionel Messi was frustrated by the Juventus defence.

Not only did the No. 7 net his 100th Champions League goal during the tie, but he has now equalled Alfredo di Stefano with 32 goals between the quarter-finals, semi-finals and final of Europe's premier club competition.

Messi, on the other hand, could not find a way past Gianluigi Buffon and has now failed to score in his past nine quarter-final outings, while his tally for the final three rounds of the tournament remains at 16, half of Ronaldo's.

That gap could increase further given that the 32-year-old will take part in two, and perhaps three, more matches with the star-covered ball this season, whereas Messi will have to wait until the 2017/18 campaign for his next continental display.

There has been a breath of fresh air in European competition, with Marco Asensio and Kylian Mbappe being the flag bearers for the future and the revolution it holds.

A 21-year-old Spaniard and an 18-year-old Frenchman have turned into sensations in the Champions League.

The quarter finals of the tournament didn't mislead anybody, with the two playing vital parts, roles that they had dreamed of since their youth.

The biggest European competition has discovered two young stars that have arrived to take over the continent and the rest of the world.

Gareth Bale was injured in Munich and Zinedine Zidane chose to go with Marco Asensio at the Allianz Arena, a stadium so big that it makes footballers look tiny. And he did the exact opposite. He assisted Cristiano Ronaldo to make it 2-1, without any fear of anything or anyone.

At Estadio Santiago Bernabeu, Zidane had another problem - and thought of Marco once again. He returned the favour. Karim Benzema was taken off, with Asensio taking to the field. The game asked for courage at a time where a poor decision could perceivably see his side knocked out by Bayern.

Asensio played, and made others play himself. He fired home with the fourth and definitive Real Madrid goal. After Mats Hummels failed to get across, he beat Manuel Neuer easily, something which Cristiano Ronaldo had only previously managed. He celebrated by pointing at the name on his shirt, setting himself up perfectly for El Clasico on Sunday.

Kylian Mbappe, meanwhile, is of interest to Asensio's employers due to seemingly being the first heir to legendary French forward Thierry Henry. The Monaco striker has faced up to the task, played well and scored goals - a lot of goals. In the second leg against Borussia Dortmund, it took him just three minutes.

Mbappe is pure electric. He scored twice in the first leg in Germany against Dortmund, as well as two in the last 16 against Manchester City to announce his arrival on the scene. Five goals in seven Champions League games shows that an extraordinary talent has been discovered that can beat a defence and find the back of the net.

Asensio and Mbappe have put themselves on the map in the quarter-finals. Conquering Europe is quite the feat, and who knows what will happen if they face each other or, perhaps, become teammates.

Court of Arbitration for Sport Neymar's only shot at Clasico

The Spanish Appeals Committee turned down Barcelona's request asking for the reduction of a three-game ban so that Neymar could feature in El Clasico, so it now will travel to a higher international court for a final decision.

On April 10, the same body issued the three match ban, one for a red card and two subsequent matches for inappropriate behaviour towards the official.

It'll now be a race against the clock for Barcelona to get their paperwork to the Court of Abritration for Sport (CAS) to review his case before the closing on Friday, if the Brazilian is to feature in Sunday's Clasico.

Bale back in Real Madrid training

Barcelona are on the horizon for Real Madrid and the welcome sight of Gareth Bale on the Valdebebas pitches on Thursday was a boost for Los Blancos.

The winger had sat out the midweek win over Bayern Munich due to muscle discomfort.