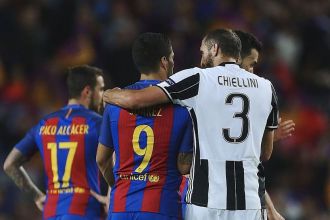 Thursday, 20 April 2017
Barcelona's Champions League quarter-final was all-but over after only 90 minutes, according to Luis Enrique after the Azulgrana failed to complete a remarkable second leg turnaround.

Leading 3-0 after the game in Turin, Juventus earned another shutout at the Camp Nou to book a place in Friday's final four draw.

"I could not define our Champions League campaign in one word," Luis Enrique told BeIN Sports. "A very poor first leg in Turin has put us out.

"I will remember a lot of moments from that game in Turin."

Despite drawing 0-0 on Wednesday night, the coach was satisfied with the vigour of his players and felt they at least deserved a victory on the night.

"Two teams were playing to attack, one out of necessity, but [Juve] have not just locked themselves in," said the Asturian.

"I will stick with the attitude of my players and of the fans. The fairest outcome would have been a win."

Luis Enrique went on to point towards their next objective, the LaLiga title race that could well be decided in the weekend's Clasico.

"We have the option of getting into the league title race, with a direct duel against the first placed team," Luis Enrique noted. "Anyway, I love being at a club as ambitious as this.

"We always prove our label as favourites. It's a night to be proud of."

Kicking off at 20:45 CET on Sunday, the Blaugrana travel to Real Madrid knowing another defeat could end their league title hopes for the season.

Pique: Juventus deserve to progress, they can win the tournament

It was a perfectly delivered masterclass by Juventus on Wednesday as Barcelona crashed out of the Champions League 3-0 on aggregate with Gerard Pique suggesting that the Italian giants deserved to progress and could in fact go on to win the tournament.

Massimiliano Allegri's charges were aggressive in their pressing and defending their 3-0 first-leg lead for their lives as the visitors stifled Los Cules all evening long.

Whilst he was in the headlines for a tweet sent out about Real Madrid's victory over Bayern Munich on Tuesday evening, Pique was in a reflective mood as he confirmed that the Turin side deserved to progress to the semi-final.

"They are a great team and in general they were better than us, they deserved to progress and I wish them the best because they can win the tournament," he explained to BeIN Sports.

The Blaugrana's poor performance in Turin left Luis Enrique's side with a mountain to climb and the Spanish defender admitted that they left themselves too much to do at the Camp Nou.

"We may have created chances but we had to climb such a mountain," he added.

Leonardo Bonucci and Giorgio Chiellini were once again spectacular in defence as they kept Luis Suarez, Neymar and Lionel Messi quiet for the entire match and the importance of Juventus' defensive play wasn't lost on the 30-year-old.

"They are Italians, they know how to defend well and they are specialists in that area, they have come to play their style of football and have done it very well," said Pique.

Bouncing back is imperative for Los Cules now with the small matter of El Clasico to come on Sunday.

Anything other than a victory at the Estadio Santiago Bernabeu would all but hand Los Blancos the LaLiga title and Pique believes that his team has the capability to go and spoil the party in the Spanish capital.

"We are going to the Bernabeu to compete and to try and win, we have been good there in recent years and whilst we aren't at our best, we can win," he added.

Emotions around the Catalan giants have been running rather high in recent months with some sections of the club's support losing patience with the hierarchy in charge of the club.

However there was quite the spectacle just before the final whistle on Wednesday as the entire home faithful rose to their feet to show their appreciation to the players despite such a defeat, something that really took Pique's attention.

"I think this is a hard defeat to take but the fans were fantastic and they kept singing," the Spaniard noted.

"They deserve to be remembered as it is one of the few times that I have seen the Camp Nou so proud in defeat, it makes me proud to be part of this club."

Barcelona values criticised after not kicking ball out

During Wednesday's Champions League quarter-final second leg, Barcelona were reprimanded by several onlookers for not kicking the ball out while Mario Mandzukic was injured.

After a heavy challenge, the Croat lay motionless and after Juventus finally won possession and cleared it out of play for treatment to begin, the hosts did not return it.

Among those criticising Barcelona were Alvaro Vazquez of Espanyol and ex-Real Madrid goalkeeper Jordi Codina, who turned the infamous 'values' rant of Gerard Pique on its head.

Messi, Suarez and Neymar shut out for 180 minutes

It is such a rare occurrence that Barcelona's famed attacking trio of Lionel Messi, Luis Suarez and Neymar are kept quiet but the trio being shut-out in successive matches is almost unheard of, yet that is exactly what Juventus did over 180 minutes.

Juve relied on their defensive solidity as they kept two successive clean sheets against Los Cules to progress through to the semi-final of the Champions League for the second time in three seasons.

The Blaugrana's hopes of another historic comeback were based around the talents of their front three and with the Italian giants successfully nullifying them, it was always going to be an uphill battle.

In 49 separate matches the trio have managed to score three or more goals between them with nine of those matches actually coming in the Champions League but the reality is they didn't consistently come close on Wednesday.

Much is said of Real Madrid's own BBC of Gareth Bale, Karim Benzema and Cristiano Ronaldo yet it was Gianluigi Buffon, Leonardo Bonucci and Giorgio Chiellini that kept the hosts at bay.

Putting this into context only furthers just how impressive the Italian champions' feat actually is, with Barcelona having not been shut-out in an aggregate tie since the 2013 semi-final which they lost 7-0 to Bayern Munich.

One of the key subplots from Juventus' 3-0 aggregate win over Barcelona in the Champions League quarter-final was the return of Dani Alves to the Camp Nou, and the right-back admitted it was slightly painful to inflict defeat on his old team.

Alves featured heavily in both legs as the Old Lady kept two clean sheets to book their place in Friday's semi-final draw.

"It was tough, we knew it was going to be a tough game," the Brazilian told BeIN Sports. "I'm happy for my team and my teammates, but I also have a bittersweet taste for coming back here after so many good times.

"My friends are sad. It's a strange feeling. It hurts, but that's the job. If it were the other way round they would feel sad for me."

After the final whistle, Barcelona forward Neymar was utterly disconsolate and Alves spoke of how tough it was seeing his countryman so upset.

"I've told [Neymar] that this is life, unfortunately we had to face each other," he continued. "I did not want to measure myself just on this, we have lived these moments together and now we live them apart so it is hard.

"We have to focus on our jobs, but the feeling is there."

In the final four for the second time in three years, Juve could come up against Real Madrid, Atletico Madrid, or Monaco in the semis.
Email : [email protected]
Προηγούμενο : Cristiano Ronaldo: I just ask that the Bernabeu never jeers me | Επόμενο : The secret to Cristiano Ronaldo's success
Προβολές : 441
- 3098 προηγούμενη ημέρα