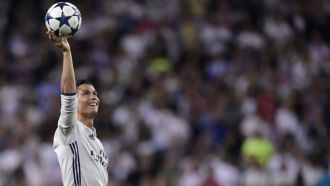 Cristiano Ronaldo: I just ask that the Bernabeu never jeers me

Wednesday, 19 April 2017
With five goals to his name over the two legs against Bayern Munich, Cristiano Ronaldo hauled Real Madrid to the semi-finals of the Champions League and the Portuguese man sought to remind the Estadio Santiago Bernabeu boo-boys of his value.

A hat-trick on the night helped Los Blancos to a 4-2 win and a 6-3 aggregate triumph, although it was far from smooth sailing.

Ronaldo's goal looked to have set Real on their way, but a Robert Lewandowski penalty kick and Sergio Ramos own goal took the game to extra-time until the winger's brace helped his side over the line.

"I just ask that the Bernabeu never whistle me," Real's all-time leading goalscorer told Antena 3 after the final whistle.

"I try to give my best in every game and even if I don't score, I try to work to help the team."

Although the capital club enjoyed a man advantage again in this second leg, Ronaldo was left assured as to his team's superiority.

"I have no doubts that Madrid were better tonight, it's not easy to score six goals against Bayern Munich," he stated.

"We knew we had to play very well or Bayern would hurt us, because they're a team who can score goals in any stadium.

"They showed that they're a great team but we played very well ourselves and had several opportunities in the first half.

"In the second half, we conceded two goals but we're used to suffering, and we're happy with the result."

With a semi-final spot secured, Ronaldo was inevitably asked about the team's ultimate goal of being the first side to successfully defend the Champions League.

"We're still far from winning the Champions League but we will try our best," he assured.

Zidane: Cristiano Ronaldo answers everybody on the pitch

After watching his side complete a memorable 4-2 win on the night over Bayern Munich, Real Madrid coach Zinedine Zidane hailed Cristiano Ronaldo's heroics after the Portuguese star scored a clinical hat-trick to help his side overcome the tireless German giants.

Los Blancos came into the second leg with confidence, having managed a 2-1 victory away in Germany, but a Robert Lewandowski penalty kick began to send some alarm bells ringing in the Estadio Santiago Bernabeu.

Ronaldo scored a fine header to assuage Madridistas' fears somewhat, but a Sergio Ramos own goal tied up the contest on aggregate, and it was left to the forward to score two more goals in extra-time to kill off the contest, with Marco Asensio's goal adding some further late gloss to the result.

"Ronaldo does his talking on the pitch and always steps up in the key moments," Zidane said in his post-match comments.

"The fans don't whistle him anymore, although this is the Bernabeu and it can happen from time to time, but the fans will thank Cristiano for everything he's done here."

The Frenchman admitted that the two-legged clash against Bayern was hard fought from beginning to end.

"It has been very even, but in the end we got the result and it was well-deserved because we played one of the best teams around," he stated.

"Today was the most difficult game we've played, but we scored six goals and we are very happy.

"I'm proud of the players because they kept a cool head, we fully expect to suffer in games like these," he admitted.

Inevitably, Zidane was asked about some of the refereeing controversies that marred the result, but he chose to diplomatically steer the conversation in the direction of his team's ability to get the desired result.

"The referee's job is difficult, but more than cards or offside goals, I think we deserved to go through because of the six goals that we scored thanks to our effort," the 44-year-old insisted.

"I don't know if I would be in favour of or against video replays in such situations.

"There is no luck in football, we had to win and we did it."

With El Clasico now looming on the horizon, Zidane admitted that some of his players could use a bit of rest after the extra-time victory over Carlo Ancelotti's charges.

"It's normal for them to be tired, but we have five days to recover," he pointed out.

"We're happy with the victory and we're going to recover fast, our effort has been tremendous but we will get some rest now even if some players have knocks.

"We managed to make three substitutions during the game and everybody contributed their bit, which is important because we need everyone's help."

"We played against Bayern at a time that many people thought was too early," he pointed out.

"If we want to win something, we have to be willing to play against everyone."

Ancelotti: I spoke with the referee and told him 'good job'

It was far from a happy return to the Spanish capital for Carlo Ancelotti as he was left frustrated by the performance of the officials in Bayern Munich's 4-2 defeat to Real Madrid with the Italian confirming he spoke with referee Viktor Kassai.

Arturo Vidal was sent off just five minutes from full-time with the Bavarian side in a fantastic position having taken a 2-1 lead courtesy of Sergio Ramos' own goal.

Replays would later show that the decision to show Vidal a second yellow was a poor one with the Chilean midfielder clearly taking the ball in his challenge on Lucas Vazquez.

"I will just say that the referee had a bad game, I spoke to him and I said 'good job'," he explained.

Bayern Munich's performance on the night was admirable with the visitors causing Los Blancos many problems and the Italian praised his team's work.

"I think we raised our game from the first leg and we played well, we deserved more but against Real Madrid it is always difficult," said the Italian.

"We deserved to lose in the first leg but not tonight."

Zinedine Zidane's charges now move onto the semi-final stage with confidence and despite suffering defeat, the class of the former Real Madrid coach shone through as he spoke glowingly about his former club.

"I am very fond of [Real Madrid], I am a supporter of Real Madrid and I wish all the best to Zidane and the whole team," he noted.

Manuel Neuer's performances over the two legs were at times superhuman as the German stopper thwarted Karim Benzema & Co. on countless occasions and his heroics were not forgotten by the veteran coach.

"He has done very well, as have the whole team, it isn't easy to come here and win in 90 minutes and Neuer has played his part," Ancelotti said.

Whilst there isn't much argument against the notion that Vidal's dismissal was incorrect, it must also be pointed out that he was walking a tightrope and could have actually been off sooner for a challenge earlier in the game.

It is all part of the Chilean's boisterous style but his energy is something that needs to be tempered according to the 57-year-old.

"Of course he has to be calmer but again he didn't deserve the second card, it was a refereeing error," he added.

The 6-3 aggregate defeat ends the German club's run of five successive semi-final appearances and now it falls on the Italian to ensure the club returns next term, a task that he is already thinking about.

"We have to look forward, we will see next year how we do in the Champions League," concluded Ancelotti. "It is a matter of small details which decide whether you can win the tournament and this year we haven't had the luck."

Ramos to Pique: Rewind and watch the PSG game

Controversy and Real Madrid create enough headlines on their own but when you put the pair together it is a goldmine and Los Blancos defender Sergio Ramos has responded to Gerard Pique by telling him to look back at Barcelona's 6-1 win over Paris Saint-Germain.

The latest spat comes after the Barcelona defender sent out a cryptic tweet after Madrid's second goal was controversially allowed to stand despite Cristiano Ronaldo being in an offside position.

Pique's tweet struck a nerve within the Real Madrid captain as he made clear that refereeing decisions also went in favour of Los Cules in the last round.

"He should rewind and look back to the PSG game and see if he thinks the same about the referees, let's wait and see what happens with Juventus in the second leg," he explained.

Tuesday evening's officiating has rather unsurprisingly sparked yet another debate about the impending introduction of a Video Assistant Referee [VAR] into the sport and the veteran defender is indeed an advocate for its use.

"You have to live with these decisions although I am in favour of the VAR," said Ramos.

On a more positive note it was actually the former Sevilla defender's 100th match in the Champions League on Tuesday night and he made clear just how proud he was to reach such a rare milestone.

"It is a beautiful figure to reach and I hopefully can continue here for many years as long as I enjoy my job," he said.

Despite still having a semi-final to play there are some within the Real Madrid fanbase that are already dreaming of an appearance in the Cardiff final, however the 31-year-old refused to entertain such a notion with so much football left to play.

"We can't talk about the final because we are only in the semi-final but it is clear," he added. "We want to be the champions and we are very happy to have eliminated Bayern, one of our biggest challengers."

Allegri: Juventus will play against Barcelona as if we have to win

Even a three-goal first leg advantage will not deter Massimiliano Allegri from trying to claim an on the night victory when Juventus face Barcelona on Wednesday.

A place in the Champions League semi-finals is at stake for both teams and the Bianconeri must be wary of the lackadaisical approach tried and failed by Paris Saint-Germain in a similar position last month.

"We have to face the game without thinking about the first leg," the Italian told reporters. "We are going to play it as if we have to win, the game lasts 95 minutes and we have to have the ability to read the game."

Allegri is confident that the referee won't take centre stage at the Camp Nou, following controversies in the last-16, and is excited by the prospect of dumping out the Blaugrana.

"This referee is of an international level and I have a lot of confidence in him, tomorrow he will be up to date," he added. "I hope Luis Enrique is not a psychic and that we have a good game.

"The first thing is to get to the semi-finals and for that we need a positive result tomorrow.

"Winning the Champions League would be extraordinary. There are only a few games and if you have a bad night, you do not recover."

Professionalism will be key to Juventus' success, according to the former AC Milan boss, with the Catalans' defensive worries considered there for the taking.

"The perfect match is to qualify, that said, tomorrow we have to make a very lucid and professional game," said Allegri. "There will be times to defend and others to attack and score goals.

"I don't think that Barcelona's defensive difficulties have changed in a week, so there is that to work on."

The game kicks off at 20:45 CET on Wednesday, with Juve protecting a 3-0 aggregate lead at the Camp Nou.
Email : [email protected]
Προηγούμενο : Zidane: Isco is ready to play | Επόμενο : Luis Enrique: Barcelona's poor first leg at Juventus knocked us out
Προβολές : 400
- 2996 προηγούμενη ημέρα