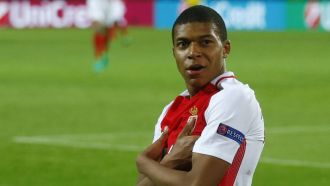 Saturday, 15 April 2017
Though Monaco have no need to sell their young superstar, Kylian Mbappe, that hasn't stopped Real Madrid from making an approach.

Los Blancos are so keen to land the forward that the deal may even be done as early as this summer's transfer window.

News has reached the Estadio Santiago Bernabeu that the player could be available but he would only be sold to the highest bidder, and the amounts that are being spoken about are in the region of 100 million euros.

The doubt for Real is whether he would respond equally as well for them or if it would be better to wait one more season.

Mbappe, who is represented by his father and a lawyer, has already made it clear that his desire, should he leave, would be to go to Real Madrid.

No rush to sell for Monaco

Monaco no longer have the need of years ago when they had to sell to survive.

Now they want to give some time to think over such a vital decision as the future of Mbappe, a player who is a goal away from equalling the best debut season in the Champions League.

With six currently, he is just one behind Thierry Henry's seven.

The Ligue 1 side also know that if they need money urgently they can sell Mendy, Lemar or Bakayoko.

With the second half about to start, Zinedine Zidane rushed down the Allianz Arena tunnel. He'd used every second of the interval, to the point where he was the last one out of the away dressing room. Real Madrid were 1-0 down, and fortunate to be so, with Bayern Munich missing a penalty not long before the break. The Bavarians were well on top.

But while Zidane might have missed the start of the second half, his half time work was easy to see as the whistle blew. Real Madrid had changed shape, with Gareth Bale moving into midfield to leave Karim Benzema and Cristiano Ronaldo as strike partners. It allowed the visitors to claim the centre of the pitch, where Xabi Alonso, Thiago Alcantara and Arturo Vidal had been so dominant up until that point. It allowed them to mount a comeback.

Of course, the game hinged on more than just Zidane's tactical switch, with the dismissal of Javi Martinez just after the hour mark the incident upon which the contest truly pivoted, but the dynamic had changed long before then. The match started flowing in Real Madrid's favour as soon as Zidane drew up his alterations on the blackboard at half time, with Cristiano Ronaldo netting the equaliser just two minutes into the second half.

It's no so long since Zidane's perceived lack of tactical nous was widely seen as a weakness. The Champions League triumph of his first season as a senior manager was denounced in some quarters as merely the result of inspiration. It was claimed that Zidane's appointment had galvanised a squad solely due to his legendary status at the club and that Real Madrid could only go so far under his control.

But with Zidane at the helm Real Madrid stand a strong chance of winning back to back Champions League titles, something last achieved by Arrigo Sacchi's legendary AC Milan side, with his team also on course to win La Liga for the first time since 2012. He could feasibly go down as the club's most successful manager in modern times, making a mockery of those who doubted him, certainly those who doubted him as a tactician.

But Wednesday's win in Bavaria wasn't the first time Zidane has underlined his capacity as a tactical thinker. There was the comprehensive 3-0 win over Atletico Madrid at the Vicente Calderon earlier in the season, for which Zidane had picked an unfamiliar starting lineup. Pundits and fans alike attempted to second guess the Real boss' tactical blueprint, but once the match started it became clear that Zidane had got it right, with the 4-4-1-1 shape stopping Atleti's transition while giving Ronaldo the space to score a hat-trick.

That win proved to be a watershed in the way Zidane is thought of as a coach, with the former World Cup winner finally recognised as a legitimate footballing thinker. But if that win over Atletico announced made a point in Spain, the win at the Allianz Arena announced it to a continental audience.

Contrast the way in which Zidane controlled the match against Bayern Munich to the way Luis Enrique allowed Barcelona's game against Juventus on Tuesday night to get away from them. Unlike the Real boss, he failed to stem the flow of the match with his half time changes, once again demonstrating a lack of understanding in how to get the best from his players in certain circumstances.

Zidane will face another test of his tactical expertise in the return leg next week, with Bayern Munich more than capable of pulling off a result at the Santiago Bernabeu that would see them progress to the Champions League semi-finals at Real's expense. But nonetheless, Wednesday's win over the Bavarians, or rather the manner of it, was another triumph for someone whose managerial career is already starting to match that which he enjoyed as a player. Zidane is the real deal

Luis Enrique: I wasn't wrong at all with my tactics in Turin

Despite a horrendous performance against Juventus on Tuesday night, Barcelona coach Luis Enrique has refused to accept any of the blame for the humiliation.

He has already publicly singled three players out for particular criticism, hardly likely to endear him further to his staff.

"It is clear that I am the person most responsible [for the defeat]," he said to reporters at his pre-match press conference for the Real Sociedad game.

"But for the match in Turin, I was not at all wrong with my tactics."

Though the Catalans have an incredible home record against La Real, the Asturian is taking nothing for granted.

"Real are a team that when they have the ball, they know how to play," he continued.

"They are a complex rival."

As ever, he called on the home support to make life difficult for both Sociedad and Juventus.

"There is a part of the Camp Nou that always encourages," he said.

"They don't whistle at the players, rather, they'll wait until the end of the season."

Putting a marker down for the final games of the season, Luis Enrique made it clear who the boss is.

"I am the coach and I decide everything," he noted.

"If anyone has a problem, I'll give them time in the dressing room and they can tell me to my face."

Chelsea manager Antonio Conte refused to give extra significance to Sunday's Premier League clash at Manchester United, saying his team were just focussed on picking up another three points to maintain their lead at the top.

Second-placed Tottenham Hotspur are seven points adrift in their relentless pursuit of Chelsea, having picked up six consecutive league wins, and will look to provisionally close the gap to four points when they host Bournemouth on Saturday.

Conte reckons the title race will continue right until the end of the season.

"I think this game is like any other game and for us the most important thing is the three points," the Italian manager told a news conference on Friday.

"This (title) was our target at the start of the season... For sure the road is long and there are other teams who want to win the title and I think for this reason it will be until the end of the season."

United manager Jose Mourinho will field a strong side this weekend despite the game being sandwiched between the two-legged Europa League quarter-final against Anderlecht.

Fifth-placed United are four points behind fourth-placed Manchester City, with a game in hand, and need to finish in the top four or win the Europa League to make the Champions League.

"For sure we will face a really strong team because Manchester United are a really good team, physically and technically very strong, and for this reason we must pay great attention," Conte added.

"United also want to play and find a place in next season's Champions League and arrive in the first four and I think they have every possibility to do this."

United are on a 21-game unbeaten league run since losing 4-0 in October at Chelsea, who have the best away record in the league, having lost just twice in 16 games this season.

Ramos: Pique attacking Real annoys others on the national team

Real Madrid captain Sergio Ramos has advised Gerard Pique against public criticism of the club in future, suggesting it causes tension amongst the Spanish national team as a whole when they meet for international fixtures.

The Barcelona defender hit the headlines recently for slamming the values of Los Blancos, which even led to the club seriously considering taking legal action against him.

"When Pique attacks Real Madrid, our club, our crest, our colours it does have an impact," he told Universo Valdano in an interview that will air on Friday.

"These are things that can be avoided and which should not be done but sometimes when everything is calm and quiet, Pique needs to cause a stir and have that extra hustle and bustle in his life."

The former Sevilla man insisted that he himself has learned to think differently given his position of responsibility but does not think that there is any real malice towards anyone in his international colleague's comments.

"I'm a very temperamental guy but when you wear the armband of Real Madrid and the Spanish national team, you have to think differently," he added.

"I don't think that Pique really has any bad opinion about any of my Madrid teammates though."
Email : [email protected]
Προηγούμενο : Cristiano Ronaldo: The two goals in Munich were impressive | Επόμενο : Zidane: Isco belongs at Real Madrid
Προβολές : 389
- 3019 προηγούμενη ημέρα