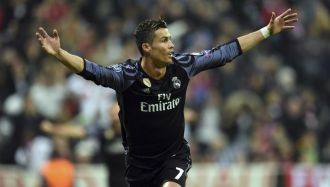 Cristiano Ronaldo: I don't know who was doubting me

Thursday, 13 April 2017
He may have gone six games - an eternity by his own standards - without finding the net in Europe but when it mattered most, Cristiano Ronaldo struck twice to put his side in a commanding position in their quarter-final tie against Bayern Munich

When Arturo Vidal squared up from twelve yards to try to make it 2-0, it looked to be a bad night at the office for the holders, but cometh the hour, cometh the man and Ronaldo struck twice after the break to secure a 2-1 win.

"It's not easy when you're behind against team like Bayern, but we hit back early after the break and we won, so now we're in a good position," said the Portuguese attacker.

"Football is full of surprises, we scored and then they went down to ten men," he continued.

He clearly had little time for those who claimed his powers are diminishing with age.

"I don't know he doubts me, they must be in the minority.

"Those who watch me closest have no such doubts," Ronaldo concluded.

Zidane: Real Madrid are disappointed because we had many chances

If Real Madrid fans assumed that Zinedine Zidane would be satisfied with his team's 2-1 victory in Munich, they would be mistaken, with the Frenchman suggesting that his charges could've better exploited their man advantage in the second half.

A fierce Arturo Vidal header put Bayern Munich ahead in the 25th minute as the Germans imposed their game on Real in the first half, but the Chilean then blazed an incorrectly awarded penalty kick over the bar just before the halftime whistle.

Cristiano Ronaldo then scored two second-half goals either side of Javi Martinez's sending-off, but Real were unable to score a third due in big part to Manuel Neuer's shot-stopping exploits.

"We are disappointed because we had many chances in the second half playing against ten men, and another goal would've been better, but we hit a goalkeeping wall," Zidane said in his post-match press conference.

However, the French boss pointed out that no scoreline could've been enough to help the capital club feel secure going into the second leg.

"We could've scored another goal and that still wouldn't have settled the tie," he said.

The 44-year-old acknowledged that his team were put under the cosh in the first half, echoing captain Sergio Ramos' comments.

"We suffered in the first half, and I was happy go into halftime only 0-1 down," he admitted.

"There shouldn't have been a penalty awarded but these things happen. 2-0 would've made things very complicated.

"But we were patient and improved in the second half, and playing against ten men was easier," Zidane observed.

"In the second half, we managed to keep the ball away from Bayern and they don't like playing without it," he added.

"Cristiano was unhappy because he couldn't score a third, that's how ambitious he is," he pointed out.

Finally, Zidane shared his thoughts on what he believes will be a hugely challenging return leg at the Estadio Santiago Bernabeu.

"These are the knock-out rounds, and it's not over till it's over," he warned.

"We are prepared to suffer at the Estadio Santiago Bernabeu."

Ancelotti: Real Madrid could have killed off the tie, but Bayern were lucky

It is always difficult to imagine being somewhat disappointed after a 2-1 victory away from home in the Champions League quarter-final but that is exactly how Real Madrid will feel as Carlo Ancelotti admitted Los Blancos could have killed the tie and that his Bayern Munich team were lucky.

Arturo Vidal's first-half header opened the scoring and the Chilean would then miss a decisive penalty that would have put the hosts in complete control of the tie.

Real Madrid, as they so often have under Zinedine Zidane, fought back and equalised through Cristiano Ronaldo just after the break before Javi Martinez's red card turned the match entirely.

From then on it was complete dominance from the Spanish giants, which Ancelotti was quick to admit.

"Real Madrid could have killed the tie but we had a little luck and that is very important heading into the second leg," he explained.

Prior to the sending off, it was a fairly even game with both teams having their own respective spells of dominance which for a match of this magnitude is hardly surprising, yet Ancelotti made clear just how difficult it was to defend spaces with only 10 men.

"With 11 we were able to push the Madrid forwards back and then push forward ourselves using the flanks but with 10 it was very complicated, we could only focus on defending," he continued.

Bayern Munich head to the Estadio Santiago Bernabeu on Tuesday hoping for a turnaround of their own and will likely have leading goalscorer Robert Lewandowski back in the team by then.

The result itself isn't a disaster for the German champions although the former Los Blancos coach lamented Bayern's position and even went as far as suggesting the chances of his team progressing were indeed slim.

"This result isn't good, we wanted more and we had a really positive first-half where we had the chance to go 2-0 up but we missed the penalty," the coach continued.

"At the beginning of the second-half we conceded the goal and then the red card complicated matters for us, fortunately we have only played 90 minutes and we are still alive although we don't have that great an opportunity at progressing."

Cristiano Ronaldo and Bale both hit with muscular discomfort

Whilst his brace ensured it was a phenomenal night for Real Madrid's Champions League hopes, Cristiano Ronaldo joined Gareth Bale in the treatment room after the full-time whistle with both suffering muscular knocks.

Zinedine Zidane was obviously delighted with the result, albeit with a hint of disappointment at his team's profligacy in front of goal, yet these two fresh injury concerns provide him with a headache ahead of the LaLiga title run in.

Ronaldo was injured in the very last play of the match when he stretched to fire a shot towards Manuel Neuer's goal only to miss the ball and then lay on the ground in discomfort.

He was helped off the pitch by the team's medical personnel although did still complete the full 90 minutes.

Bale didn't enjoy such a privilege as the Welsh forward was withdrawn just before the hour mark as a direct result of his injury.

In his post-match press conference, the French coach made clear that Bale's substitution was simply a precautionary measure but that it was certainly a muscular issue.

"He felt something and as always I don't want to take any risks with a player's fitness," Zidane explained. "For the moment, it feels bad but I hope it is only a small problem, as it is a muscle injury,"

Borussia Dortmund coach Thomas Tuchel said his team felt ignored by the football authorities after being made to play AS Monaco in the Champions League on Wednesday, less than 24 hours after an attack on their bus.

The quarter-final first leg in Dortmund was postponed on Tuesday after three explosions went off near the German team's bus as it made its way to the stadium, injuring Spanish defender Marc Bartra.

The match was immediately rescheduled for Wednesday and Monaco ran out 3-2 winners in what turned out to be a pulsating game.

UEFA, European soccer's governing body, said it had made the decision after consulting both teams.

"We weren't asked at any point. We were told by text message that the decision had been made in Switzerland (where UEFA are based)," Tuchel told reporters. "When they told us 'you're up tomorrow', we felt completely ignored.

"They treated it as if a beer can had been thrown at the bus.

"We would have liked more time to take stock," he added. "This gives you the feeling of impotence, that we have to keep functioning and nothing else matters.

"I encouraged everyone to take the game seriously but football is not the most important thing in the world."

Tuchel said each player had been affected differently.

"Everyone has the right to deal with it in his own way," he said. "We want to help every player to overcome his inner conflict. It was a bad experience."

Dortmund midfielder Nuri Sahin, who came on as a second-half substitute, said the incident had put football into perspective.

"We love football, we suffer with football and I know we earn a lot of money, and we have a privileged life, but we are human beings and there is so much more than football in this world...and last night we felt it," he said.

"I don't know if the people can understand this but, until I was on the pitch in the second half, I didn't think about football," he said.

"I get goosebumps...when we were in the bus last night, I can't forget the faces."

AS Monaco coach Leonardo Jardim said the match had been overshadowed by Tuesday's events.

"It won't be the result that will be remembered, it will be what happened yesterday, which was not a football situation," said the Portuguese.

"Of course, the preparation was not the same. We prepared twice for the same match and today's preparation was more difficult. Yesterday, the players phoned their families, their friends and their concentration levels were not so high.

Simeone: Leicester are strong at home so it'll be a tough match

Antoine Griezmann's penalty earned Atletico Madrid a 1-0 win over Leicester City on Wednesday night, but there is still plenty of work for Los Rojiblancos to do to ensure they reach the semi-finals, as Diego Simeone admitted.

The coach is wary of the English champions' record at the King Power Stadium, where they have won all four of their matches this Champions League season.

"They are strong at home," the Argentine told beIN SPORTS after the match.

"It will be a tough, difficult and hard-fought match.

"They'll control the flow of the game with the support of their fans, but we must take it to where we feel most comfortable."

Overall, though, he was satisfied with the fact that his side won on the night and the fact that Leicester didn't bag an away goal.

"It is important not to have conceded any goals," he stressed.

"In the first half, they seemed like a dangerous team, but there was less to them in the second half.

"We were unable to overwhelm them, but we do come away with an important victory."

As for the penalty, which was Griezmann's first successful spot kick attempt for his club this season, Simeone was impressed with the Frenchman's leadership.

"Griezmann took responsibility for the penalty and that is good," he said.
Email : [email protected]
Προηγούμενο : Dybala: I'm very happy at Juventus and my contract renewal is close | Επόμενο : Cristiano Ronaldo: The two goals in Munich were impressive
Προβολές : 425
- 2999 προηγούμενη ημέρα