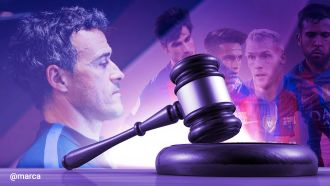 Monday, 10 April 2017
Barcelona's defeat against Malaga left many looking guilty, given that it was a game when they failed to reach anything close to their best.

Supporters, media and many across social networks have had their say on the loss which has left their LaLiga title challenge hanging in the balance.

At the club today, there are several players who are not hitting the heights that are expected of them.

That isn't the only reason for Barcelona's continued stumbling in LaLiga but it is an important factor in their below par campaign that has been littered with ups and downs and leaves winning the title very difficult.

The following players approach the bench as the accused:

Without a doubt, he has been the main target of much of the criticism as many have lost patience with him, his contribution has been scarce and his progression has been non-existent.

Against Malaga, he spurned a good chance after being set up by Lionel Messi to open the scoring and was unsurprisingly substituted on 60 minutes.

Few can remember a positive match he has played this season and more than 1,000 league minutes are summarised with a goal against former club Valencia, shakiness at the back and endless imprecise passes and losses of possession.

His poor attempt to play an offside trap allowed Sandro to race clear and open the scoring at La Rosaleda, setting Barcelona en route to defeat.

Injuries have prevented Luis Enrique from using him more but in truth, that may be more of a help than a hindrance at this moment.

He has been in the side for three of Barcelona's four league losses and loses confidence in each passing game that he features in.

He was the other great disaster of the debacle at La Rosaleda, along with Mathieu and was hooked at the interval following an anonymous first half display in which he barely touched the ball.

The former Villarreal man does represent Luis Enrique's last option in midfield and his display in Malaga will do little to change that trend.

He was given another opportunity to stake a claim to a starting role and failed to make the most of it.

His importance to the side continues to decrease and he has become a luxury substitute for Luis Enrique, who can use him to change the system if he feels it is required.

In Malaga, he was surprisingly imprecise in possession and had little impact in attack, where he did not look like the kind of player he often does going forward.

The direct consequence of the subpar showing was largely down to the coach's decision to rotate once more.

On a day when Barcelona had to beat Malaga to take advantage of Real Madrid's derby draw, he opted to shake up a side which was already without Gerard Pique and Ivan Rakitic through suspension.

Andres Iniesta and Sergi Roberto were benched and it proved to be a very costly decision.

A Real Madrid icon, Pepe's Madrid derby performance showed that he is still capable of playing at an elite level, and he remains adored by the Estadio Santiago Bernabeu faithful.

Los Blancos didn't want to give the Portuguese centre-back a two year extension, instead preferring just a one-year deal, and the star defender will almost certainly walk as a result.

Chinese offers are most lucrative at this point, but Chelsea and Paris Saint-Germain have also asked for his services.

A stunning goal and solid defensive afternoon, it may nonetheless serve more as an emotional goodbye rather than a way to change the board of director's minds at this late a stage.

Hummels came on as a substitute in Bayern's 4-1 Bundesliga victory over Borussia Dortmund on Saturday, but broke down in training on Sunday after getting a knock on his ankle.

"Mats Hummels has suffered an ankle joint distortion injury and will be sidelined for the foreseeable future," read a statement on Bayern's English-language Twitter feed (@FCBayernEN).

"Very sad about missing the next two games," Hummels wrote on his @matshummels handle, confirming that he will sit out the visit of Real on Wednesday and the Bundesliga trip to Bayer Leverkusen on Saturday.

Bayern, who are 10 points clear at the top of the Bundesliga table, will likely start with fit-again Jerome Boateng and Javi Martinez in defence against Real, while goalkeeper Manuel Neuer is a doubt after missing the Dortmund match as he recovers from a toe injury.

Wednesday's meeting is the 23rd European Cup/Champions League fixture between Bayern and Real; no match has been played more often in the competition's history.

Another match-winning performance from Zlatan Ibrahimovic had the enigmatic Manchester United forward joking that he is in fact getting younger as the years go by.

Relating himself to popular fictional character Benjamin Button, the Swede was in good form after a goal and assist helped the Red Devils past Sunderland on Sunday.

"I train hard, I keep focusing, I believe in what I do," Ibrahimovic told reporters. "It seems like the older I get the more intelligent I get. You don't waste so much energy.

"I feel like Benjamin Button, I was born old and I will die young."

The 3-0 win at the Stadium of Light kept alive United's top-four hopes ahead of next weekend's game against Premier League leaders Chelsea.

Cuadrado: Juventus must be at 105 percent versus Barcelona

In arguably the tie of the round, Juventus host Barcelona on Tuesday night to kick off their quarter-final match-up with Juan Cuadrado demanding the Bianconeri give their all, and a little bit more, to progress in the Champions League.

With Serie A well under the Old Lady's control, all efforts will be going on the first leg with the Blaugrana and it's a game the Colombian is desperate to be involved in.

"We have to think about ourselves, prepare in the best way, and reach 105 percent in Tuesday's game," he told local reporters ahead of the Blaugrana's visit.

"It will be a very good game to play in.

"We will play to our home crowd, who are always behind us, and we will try to win."

Exactly how Juventus go about winning the game is relatively simple for Cuadrado, who is aware that his side simply have to get everything right on the night.

"To win we have to be good in both defence and attack, because it will be like a final," he continued.

"They have great champions in their team and it will be important to be attentive tactically, to make as few errors as possible and to take advantage of our chances."

Total football was on display at Stadio Olimpico on Sunday night as Napoli crafted three wonderful goals to bypass Lazio in Serie A.

Going seven points clear of the Aquile in the final Champions League qualification spot, the Partenopei notched at key moments to earn their sixth consecutive win on the road in the league.

Flustering for a way back into the game, Lazio let Insigne bag a third in stoppage time after a rapid, clinical counter-attack to send the Neapolitan faithful home happy.
Email : [email protected]
Προηγούμενο : Michel: A Malaga man from Real Madrid has lent them a hand | Επόμενο : Allegri: Barcelona concede spaces in behind and Juventus must take advantage
Προβολές : 408
- 3035 προηγούμενη ημέρα