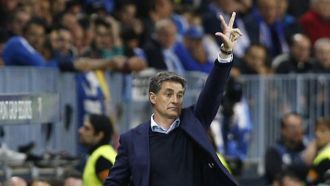 Michel: A Malaga man from Real Madrid has lent them a hand

Sunday, 09 April 2017
As a former Real Madrid player, Malaga coach Michel was more than happy to lend Los Blancos some help in their LaLiga title pursuit by beating Barcelona on Saturday night.

Goals from Sandro Ramirez and Jony saw the Andalusians home against a Blaugrana side who floundered and even lost Neymar to a red card.

"LaLiga is not lost for Barcelona here nor is it won by Real Madrid because of us," said Michel to the press.

"It's a regular league season and now the most regular thing is Real Madrid's lead.

"I already said that Real Madrid did not need a hand, because they will be the champions, but a Malaga man from Real Madrid has lent them a hand."

"The players were wanting to give more, but they needed confidence and today they have followed up on what they earned in Gijon on Wednesday," he continued.

On the receiving end of the first dismissal in his Barcelona career, Neymar was defended by coach Luis Enrique following two yellow cards dished out for disrupting play and a late challenge against Malaga.

Preventing a free-kick from being taken in the first-half by tying his shoelaces barely a yard in front of the ball, the Brazilian was an innocent party in Luis Enrique's eyes.

"What I do believe is that the interpretation of the yellow card was special," the Blaugrana boss told reporters post-match.

"We have to be careful in some games because I think there have been ugly challenges where [Malaga] clearly deserved a card, whereas [Neymar] is tying his shoelaces... well.

Given Real Madrid's three point advantage and game in hand over the Catalans, the Barcelona coach was not swayed by the suggestion that April 23's Clasico will decide the title.

"I do not think so, if we don't beat Real, it's not worth anything," he stated. "It's good that it's competitive because it makes the league more attractive.

"But the title is going to the team who wins all the points, and against Malaga we had a very good opportunity."

Hit by two stunning Malaga counter-attacks to fall to defeat on Saturday night, the Asturian was nonetheless adamant that his side deserved the points.

"I think we played well, I have no reason to reproach my players, but it has cost us," Luis Enrique continued.

"It cost us to generate dangerous attacks and then on the occasion that they got the ball forward, our interpretation of the offside rule allowed them to score.

"In the second-half we were superior even with a player less, we generated great chances and were desperate, then they got the second.

"It's not the script we'd expected, we deserved much more."

Neymar runs risk of missing the Clasico after Malaga dismissal

Barcelona were left with a mountain to climb when Neymar got his marching orders at La Rosaleda following an ugly challenge on Málaga's Diego Llorente in the second half.

It was his first red card after 181 competitive games for the club, and means he will miss next week's clash against Real Sociedad as a result.

But the worry will be whether he faces further sanction after sarcastically applauding the fourth official while heading down the tunnel; something which would see him banned for his side's crucial trip to Real Madrid on April 23.

A deflated Javier Mascherano spoke after a defeat that could have catastrophic consequences for Barcelona's title defence.

Aside from the morale-dropping 2-0 loss to Malaga, the implications of anything other than a win over Real Madrid in the upcoming Clasico could be profound.

"We have to win at the Estadio Santiago Bernabeu and hope that Real Madrid drop further points," the defender said on Movistar+.

"But these things happen. I can't fault the team, we gave it our all today."

With Neymar seeing red for an ugly challenge midway through the second half, Barcelona were always up against it and were caught out when pushing for an equaliser by substitute Jony's 90th minute strike.

"Unfortunately we didn't control the game, and once we went behind it was an uphill struggle," he admitted.

"We had chances to equalise but we knew they could always catch us on the counter."

Mascherano also gave credit to a Malaga side who have now surely secured their top-flight status with a second straight victory.

"They were well positioned, and played to their set up perfectly on the day," the Argentine said.

Marcelo: Real have to change their mentality

With Antoine Griezmann levelling late on in the Madrid derby, Real's left-back Marcelo was in no doubt where the problem lay in his team not being able to see the game out when leading 1-0.

Though the Brazilian was named man of the match, it was of little consolation.

"We have to improve the concentration and mentality," he explained to reporters post-match.

"Real dominated the game apart from the last few minutes and in the end it cost us.

"Against this type of team we have to be focused for the whole 90 minutes."

Next up are Bayern Munich in the Champions League, continuing Los Blancos' heavy April schedule.

"Now all of the matches we have are difficult," Marcelo continued.

"It's what we like, but we have to change to be able to win them."

Real might be without goalscorer Pepe after he took a heavy blow not long after his goal, meaning he needed to be substituted.

"The costumes are worried about him," he said.

"Pepe had the misfortune to clash with Kroos who accidentally hit him with a very strong blow.

Zidane: You'll have to ask someone else about my future

Real Madrid boss Zinedine Zidane could only watch as his side conceded a late equaliser to Atletico Madrid in LaLiga's showpiece fixture of Week 31, with Antoine Griezmann upping the pressure on the Blancos' boss shoulders.

A 1-1 draw with Atleti at Estadio Santiago Bernabeu has left Barcelona with the chance to close the gap at the top slightly, which led to some interesting questions being angled towards the French coach.

"You will have to ask somebody else about [my future]," Zidane explained at a post-match press conference.

"I dedicate myself to training hard and I do this [job] with excitement. I am not going to speculate, I live on a day-to-day basis."

Pepe scored the opening goal for Los Blancos, before being forced off due to injury, but Zidane blamed a lack of concentration rather than his personnel.

"We had a great game, we lost our focus," he continued. "I can't say that Atletico played a good game.

"I wanted to use Isco to defend the left flank and to have more of the ball, and with Pepe I didn't have a choice. But the key is that we didn't do well in the last five minutes.

"We failed to score a second goal and should have defended better in the last five minutes. But we have to be calm and think about the game on Wednesday.

"I don't believe it was anything physical, but rather a lack of concentration, we had to defend together with more energy.

"We didn't defend the pass well, we were disjointed. We are very disappointed. What happened, happened. I am disappointed.

"I am going to keep smiling between now and until the end of the season."

Next up for Real is a tough trip to Allianz Arena to face Bayern Munich on Wednesday night in the first leg of their Champions League quarter-final.

Simeone: Lost without Griezmann? I don't know where he's going

Antoine Griezmann rescued a point for Atletico Madrid in Saturday afternoon's Madrid derby, but Diego Simeone afterwards dismissed the suggestion that the team is over-reliant on their French forward.

Asked if the team would be lost without the No.7, the coach responded by pointing out that he is currently an Atletico player and that he loves watching him play.

"I don't know where he's going to go," Simeone replied in his post-match press conference.

"I am excited by the way he plays.

"Given that he is talented, it is pleasing to see how he sacrifices himself [for the team].

"I have debated his position with a number of people as he is clinical, he heads well and he dribbles well.

"I am pleased with how it's going for him."

Analysing the match as a whole, the Argentine admitted that he wasn't fully content with the draw as he felt his side could have won.

"We leave with a bitter taste in our mouths because we felt that at the end we were closing in on the victory," he told reporters.

"[Real Madrid's] goal hurt us because they hadn't had dangerous situations.

"We then suffered for a few minutes after that, but our substitutions did well for us."

The topic of fitness was also raised, given that an important Champions League clash against Leicester City is coming up in midweek, but Simeone was adamant than the struggles his team had at the start of the second half were nothing to worry about.

"We weren't tired and physically the team was tremendous," he insisted.

"At times we were imprecise, but it's not easy at such rhythm.

"[The visit of Leicester] will be a difficult game and we'll have to work hard against this team which is, in some aspects, similar to us."