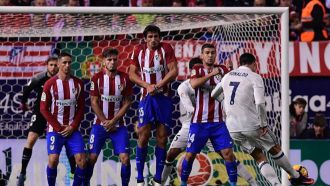 The best derby in the world

Saturday, 08 April 2017
Madrid is the only city in Europe that can boast of having had two representatives in one Champions League final and it has managed to do so on two occasions no less.

The Spanish capital's derby has become the best and most important in the world in recent seasons in terms of the quality of the two teams competing.

Both Real and Atletico are among the best teams in the game today and whatever the result is on Saturday, few will be too shocked about the outcome.

Along with the German region of Ruhr, Madrid is the only place that currently has two clubs still in the latter stages of European competition.

In the UEFA rankings, Real are currently top dogs as Champions League holders, while the Rojiblancos are ranked fourth in the standings.

Both are in the quarter-final of Europe's premier club competition and are both situated in the top three of the LaLiga.

In their ranks, the squads also possess Cristiano Ronaldo and Antoine Griezmann, who finished first and third in the Ballon d'Or voting respectively.

Aside from Madrid, as previously mentioned, only the Ruhr derby boasts having two clubs still competing in Europe, with Borussia Dortmund in the Champions League quarter-final and Schalke reaching the same stage in the Europa League.

But on closer examination of the sides' league form, Dortmund currently sit fourth, while Schalke are in 12th spot, which isn't quite as impressive as the Madrid duo have managed.

London is a city where people eat, sleep and breathe football and has many great rivalries.

Although Tottenham and Chelsea are the best in the Premier League this season, the city bragging rights have largely been dominated by the Blues and Arsenal.

However, those sides weren't quite as impressive in Europe this year, with Chelsea failing to even qualify for continental competition and Arsenal bowing out at the last 16 phase against Bayern Munich.

The Red Devils have historically had the upper hand in the fixture but the influx of wealth at their 'noisy neighbours' has swung the pendulum the other way somewhat in recent years.

Jose Mourinho's side are currently aiming to pick up a continental trophy this season in the form of the Europa League, while the Citizens were beaten by Monaco in the Champions League.

The Milan derby is widely regarded as one of the biggest in Europe but two of Italy's finest clubs are both going through transitional periods in their history.

Neither are involved in the fight for major domestic honours, let alone European titles, and are currently sat outside the top five in Serie A, which has resulted in both their UEFA rankings plummeting to the 40s.

Although the Lisbon derby may not be instantly acknowledged as one of the most attractive, it is one of the few cities to have had two teams in the Champions League this season.

Sporting, who were in Real's group, were eliminated at the group phase, while Benfica were beaten in the first knockout round.

South America does feature the always tasty Boca-River derby, one which is rightly considered to be up there with the very best of them, but while Boca currently sit first in the league, their rivals are quite a way back in fifth.

In Brazil, whose league doesn't start until May, Flamengo-Fluminense and Corinthians-Sau Paulo are the derbies to keep a close eye on.

Elsewhere in that continent, Nacional's clashes with Penarol are usually exciting and fiery affairs, while fireworks can be expected University and Colo Colo in Chile face off, which is also the case in Medellin's local derby between Atletico Nacional and Independiente in Colombia.

Simeone: I imagine Real Madrid will play Isco and have more of the ball than with Casemiro

With Isco potentially playing an important role for Los Blancos, Atletico Madrid boss Diego Simeone believes that Real Madrid will be looking to control the game when his side pay a visit to the Estadio Santiago Bernabeu on Saturday.

Zinedine Zidane's men go into the game in great form and sit atop LaLiga, but both teams have won their last five consecutive matches - with the visitors hitting their stride very late in the campaign.

"We are expecting an opponent that comes out strongly, with high pressure and tempo in the first 20-25 minutes," Simeone said at his pre-match press conference.

"With BBC, and I imagine they will play Isco, they will have more possession than if Casemiro featured.

"It is the same as playing at any ground, we always want the three points - we need them for our own objectives."

Antoine Griezmann, who believes that Atletico are favourites, and Gabi, will be two of the key men for the tough away visit, but Simeone isn't going to get carried away.

"Any footballer that is going to play a game feels the excitement of winning, it is a logical response [from Griezmann].

"Real Madrid and their statistics are extraordinary, they have won the Champions League and the Club World Cup, they are first and look on their way to winning the league. The numbers speak for themselves.

"I always want the best for Antoine, he has had a tremendous growth because he has wanted it, to be a man and make decisions.

"He is on the way to being one of the greats, and in a pretty good season we are hoping for the best out of him.

"Away from being captain, Gabi has leadership that transmits the right mood of working as a collective that the teams needs. He is someone who dictates the tempo of the game."

The coach concluded by suggesting that anything can happen in a game which could have a huge impact on the title race - even if Atletico aren't in it themselves.

"A game is a game, and different situations can occur which aren't necessarily down to the context of the match. Anyone can win," he said.

Some matches take on an added dimension given their importance, and Saturday's decisive Madrid derby is no exception, so it should come as no surprise that Zinedine Zidane is expected to start the same XI that won the Champions League final in Milan last season.

For the biggest occasions, Zidane's line-ups of choice have always been clear.

All of the components of that XI are available and fit for the weekend, and given Zidane's past preferences, he isn't likely to deviate too much from it when it matters most.

Throughout the season, key players like Casemiro and Bale faced long spells on the sideline, but fortunately for Zidane, there is little to worry about in that sense.

Against Leganes only Navas, Ramos, Marcelo and Casemiro participated, with heavy rotations meaning the other stars will be as fresh as possible.

To win LaLiga, Los Blancos will have to rise to the occasion, and no better XI to do that with than one that has history on its side.

Cristiano Ronaldo facing one of his favourite victims in Atletico

Always ready for a new challenge, Cristiano Ronaldo has to continue finding ways to outdo himself, and Saturday's match is yet another opportunity since Atletico have always been a team he has fared well against.

Therefore the pressure for him to put in another performance like his earlier hat-trick at the Estadio Vicente Calderon mounts.

It hasn't been the easiest of seasons for the Portuguese star, as it is his worst goals per minute ratio since 2009/10.

If it were any other player, 26 goals in 35 matches would be an impressive feat, but Ronaldo is held to other standards.

With nine LaLiga matches left, and what he'll be hoping is more than two Champions League ties, there is still plenty of time for a player of Cristiano Ronaldo's calibre to turn things around.

The Portuguese star has already beaten Atletico Madrid 14 times in his career, and they are his third favourite target.

It is 18 derby goals in 26 matches and the Real No.7 will be looking to expand on that come Saturday afternoon.

Messi's doctor: I am not a magician, a sorceror or a guru

While Lionel Messi has fans accustomed to his magic on the pitch, his physio, dietitian and doctor Giulano Poser has admitted he can't replicate that magic when treating him off of it.

Poser has treated many athletes for over 30 years, and has recently gained an unwanted fame thanks to his influence on the Argentine's fitness and well-being, something which he has come to detest.

"I look for causes in a problem, and go beyond it to find the symptoms," he told Corriere della Sera.

"The body has been acquiring toxins, so if he wants to stay at the level he is at [Messi], he must change," Poser said.

Gonzalo Higuian, a fellow countryman of Messi's, has been criticised over his weight and also sought out Poser's services.

"One does not become a phenomenon like [Lionel] Messi, only by eating in a certain way," he continued.

Among the food groups recommended by the doctor, an organic diet is a must, which includes a variety of cereals, seasoned fruits and vegetables.

"Unroasted nuts, extra olive oil, eggs and fresh fish... the less the better," he pointed out.

"You can have 16 or 17 meals a week, and this should include breakfast, as it is a fundamental part of any diet."

Throughout his career he has treated many players, including the likes of Roberto Baggio, Sergio Aguero and Giorgio Chiellini.

As well as footballers, Poser has also worked with cyclist David Rebellin, who won an Olympic medal in Beijing, although that was later confiscated due to doping allegations after the two had worked together.

The doctor does not use forbidden substances and alluded to the kind of treatments that were used on Rebellin`s vertical vertebrae.

"Twenty years ago I helped him, then after this he won two classics," he said.

Although mainly acknowledged as a dietitian, the Italian also focuses on kinesiology, which qualifies as unconventional and complimentary to traditional medicine.

"Through testing muscles, you can see the effects of food and integrate it," added the doctor.

"Each individual has different answers during this method."

Because of the work he has done with Messi, many new clients have called, but he has decided to reject most of them.
Email : [email protected]
Προηγούμενο : Real Madrid's true title ambitions to be tested by in-form Atletico | Επόμενο : Michel: A Malaga man from Real Madrid has lent them a hand
Προβολές : 514
- 2961 προηγούμενη ημέρα