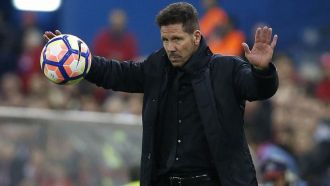 Simeone: I spoke to Theo 20 days ago and we know what was said

Yet the Argentine coach couldn't reveal any further details, other than the fact that he spoke to the player - who is on loan at Alaves - recently.

"I spoke to Theo about a month or 20 days ago and I know what he told me and he knows what I told him," he said on the matter.

"I am very happy with what he is doing.

"I always wish the best for my players.

"These questions are for [sporting director] Andrea Berta and for [president] Enrique Cerezo.

"When the season finishes, they will tell me which players are there and which ones I can count on.

"[The speculation] doesn't bother me at all."

As for the evening's match, the Argentine was content with the performance, despite Los Colchoneros' slow start.

"It took us 15 minutes, during which they had the ball, for us to get into it," he admitted.

"Then we took control of the game and had the ball.

"We then sat back in the second half to hit them on the counter attack.

"We could have scored another goal, but [Geronimo] Rulli was very good and the best of everyone.

"[The lack of more goals] doesn't worry me."

He also praised his current left-back Filipe Luis, who was the driving force behind so many of Atletico's attacks and who scored the only goal.

"Our full-backs have always had attacking characteristics," he pointed out.

"The way Filipe Luis bursts forward helps us and he reads really well when he should appear.

"That speaks volumes about his growth.

"We fought hard to have him with us.

"He is an extraordinary player."

Next up for Atletico is Saturday's Madrid derby, although Simeone would not be drawn into making any predictions of the result.

For just 24 million euros, Real Madrid are ready to pay for Theo Hernandez's buyout clause, and there isn't anything Atletico Madrid can do about it to avoid the current Alaves player from joining Los Blancos.

The last time Perez splashed out on a buy-out clause was to lure another player away from a major rival - none other than Luis Figo from Barcelona.

Back in 2000/01, Perez promised he'd sign Figo if he won the Real Madrid presidential elections, which he followed through on after paying the Portuguese star for roughly 60 million euros.

That same season, Santiago Solari was signed from Atleti as they were relegated.

Messi: I don't pay attention to the critics

Breaking his silence on his international suspension for the first time, Lionel Messi claimed that he does not take note of what critics say about him.

The Barcelona ace helped his side to a victory over Chile in a World Cup qualifier but a tirade against officials in that game saw him hit with a four-game suspension and miss their defeat to Bolivia.

That resulted in him being singled out for criticism by some in his homeland but Messi wasn't fazed by it and reiterated his commitment to his country.

"I understand the people who always want us to win and demand that we deliver a trophy and those of us who play for the national team want to win a title too," Messi told Esquire magazine in Mexico.

"The criticism I receive isn't something I care about because I know about the things that happened."

In supporting his argument, Messi also revealed that the success he enjoyed with his country at the Beijing Olympic Games in 2008 is the title he most treasures.

"That is the win that I value the most because it is a tournament that you may only play in once in your life and involves many athletes from different disciplines," he added.

Messi also paid tribute to Pep Guardiola for the impact he had upon his career during his time at the Camp Nou and revealed the most important things in his life in conclusion.

"For myself and my teammates, it is a source of great pride that we were part of that Barcelona team who won everything," he said. "Guardiola found the balance, while also managing to get the best of each of us and our qualities.

"The most essential things for me in my life are my children and my family. Being with them is something I love."

Luka Modric may have been substituted by Zinedine Zidane in four of Real Madrid's past five matches, but the coach insisted that he has no problem with the way the midfielder has been playing.

Against Alaves he was hooked after a 68 minute showing which was disappointing by the Croat's standards, yet the Frenchman has defended his player.

"Maybe I'm wrong, but you're telling me that Modric is playing poorly and I'm worried by what you're saying," he said when the matter was raised on Tuesday.

"How can you say he's not playing well?

"I am not worried and, on the contrary, I am pleased with what he is doing on the pitch."

The return of Gareth Bale may be one alternative reason for the increased substituting of the midfielder, given that the BBC front three are rarely taken off when fit.

Having spent so much time on the bench in recent weeks, there is now hope that the 31-year-old will be extra fresh for a busy month of April.

Guardiola: Chelsea deserve to be top of the Premier League

The ultimate goal of Pep Guardiola at Manchester City is undoubtedly the Premier League summit, although the Spaniard believes that Chelsea are the rightful leaders at this stage.

Fighting for Champions League qualification, the ex-Barcelona boss maintains that his City side are on track and that he's on top of their development curve ahead of the run-in.

"We are in a process of improvement, I know now where we are - the good things and the things we must improve - but Wednesday will be a good test on a big stage," said Guardiola to reporters. "There are a lot of things we can improve, in the boxes especially.

"Chelsea will be a big game and especially a big game away, it is important to learn from these kinds of games for the future. Chelsea deserve to be where they are, they have won a lot of games and deserve their position.

"They play less games, they have more time to prepare. But Chelsea will be in Europe next year and they have the quality to compete."

Discussing the 3-1 scoreline that Chelsea nabbed at the Etihad Stadium earlier in the season, Guardiola is confident that his players will keep their heads at Stamford Bridge on Wednesday night.

"Every game is completely different, what I would like from my team is to go out and play," he continued. "What happened last time was many, many things.

"Our frustration on the pitch happened. Sergio [Aguero] and Fernandinho are nice guys.

"There are nine games left. We have to take as many points as possible and we will see."

The coach also stated that he hopes Gabriel Jesus will be back before the end of the campaign, but pushed back any transfer talk to meetings he'll have with the board once the campaign ends.

Despite picking up a knock with Argentina during international duty, Gabriel Mercado will be available to face Barcelona on Wednesday night at the Camp Nou.

Sergio Escudero will also be a boost to Jorge Sampaoli's defence after missing the Sporting Gijon match due to suspension.

In turn, Ganso and Luciano Vietto will miss out.

Email : [email protected]
Προηγούμενο : PSG and Manchester City line up as Pepe turns away from China move | Επόμενο : Zidane: I understand why James Rodriguez is annoyed, I have nothing against him
Προβολές : 341
- 2916 προηγούμενη ημέρα