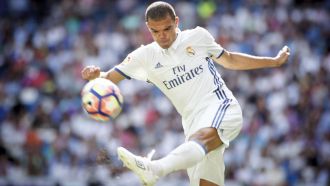 Tuesday, 04 April 2017
Having agreed a move to Hebei China Fortune, Real Madrid defender Pepe is now set to shun his 12 million euro salary in Asia and stay put in Europe amid interest from Manchester City and Paris Saint-Germain.

The centre-back has long made his mind up over leaving Los Blancos when his contract expires in the summer, despite still being a key part of Zinedine Zidane's side when fit, because the club have failed to offer him the two-year deal he desires.

That is not an issue with either City or PSG, where Pep Guardiola and Unai Emery admire Pepe and have made efforts to persuade the player's agent Jorge Mendes to agree to a move to their respective sides.

Naturally, neither can match Manuel Pellegrini's offer at Hebei in economic terms, but the sporting value of remaining in the Champions League cannot be underestimated.

The dealbreaker is believed to have been Pepe's national team boss Fernando Santos, as the Portugal boss explained that the 34-year-old would be putting his participation at the 2018 World Cup at serious risk if he were to move to China.

With that a prospect the defender is unwilling to risk, it appears that the final few months of his stay in Madrid will be spent negotiating a two-year stay in either Paris or Manchester.

The offer is on the table and it's a firm one of 6 million euros per season over six years, but Isco will only put pen to paper on a fresh Real Madrid contract once he's assured of his importance in Zinedine Zidane's eyes.

Those in the Estadio Santiago Bernabeu stands and the directors' box have thrown their support behind the midfielder after a number of eye-catching displays, with the hope that he'll stay put and continue to grow in the Spanish capital.

However, there is one last element that must be settled for the 24-year-old; his role in the team.

Isco does not only seek to play for Real, but to start in the biggest games and be given a chance to lead the team to glory in the upcoming clashes against Bayern Munich, Barcelona, and Atletico Madrid.

Therefore it is coach Zidane that holds the player's fate in his hands, once again needing to find the balance between rotations, form, and the clash of egos bubbling under inside the Merengues dressing room.

Money, duration, and all other fine details are of little importance to Isco as seeks a headline role at Real Madrid before he commits his future to the league leaders, an act he remains desperate to do.

Zidane to carry on with rotation

Looking ahead to the derby match against Atletico Madrid, Zinedine Zidane will rotate his squad further against Leganes on Wednesday.

Real Madrid returned to training on Monday after their hard fought victory against Alaves, and all ten of the outfield players that started that match were left out of the training session.

Some will not feature in the midweek clash, as they will be allowed extra recovery time but Sergio Ramos, Keylor Navas, Marcelo, Casemiro and James Rodriguez will all return to the starting line-up.

Rafael Varane, who was injured during the clash at the Estadio Santiago Bernabeu, was also absent, and the club's official website report that he will now undergo tests to determine the extent of his latest injury.

Possession play, pressure work and circuits were a feature of the session that included Castilla players, Enzo, Salto, Seoane and Lin.

The Blaugrana's vice-president Jordi Cardoner came out in defence of the player the day after his comments and the president has reiterated the club's support.

"The club already made its position clear through Cardoner and is in agreement with Pique," Bartomeu said on Monday.

He was speaking at the presentation of the soon-to-be-built Estadi Johan Cruyff, where some of the club's youth teams and the women's team will play.

Curiously, one of Pique's main criticisms of Real Madrid was the activities of those who visited their presidential box, yet Bartomeu announced that the new ground will have one and spoke of his pride at the thought that the world's best coaches would visit it to see the academy's best talents.

Taking advantage of Barcelona's shaky defence is key to Juventus' hopes of winning in the Champions League quarter-finals, according to Fabio Capello.

While the Italian was not overly impressed by the Bianconeri's display against Napoli on Sunday, he maintained that the Blaugrana have a fundamental weakness in their backline that must be exploited.

"Barcelona don't know how to defend, unlike Juventus," the ex-England boss told Rai.

"Against Barcelona, Juve cannot relax until the 95th minute, because they can turn the result around in three or four minutes.

"I saw Juventus' draw with Napoli and I wasn't very fond of them, they were too weak and couldn't play the ball around.

"Napoli pressed well and if Barcelona do so, there will be problems."

Capello also compared Lionel Messi to being the 'Luciano Pavarotti of football', noting that the Old Lady must find a way to beat the Catalans regardless of their style or performance.

Carlo Ancelotti will keep Thomas Muller on the sidelines for Bayern Munich's next two Bundesliga matches so that he can recover in time for the upcoming Champions League quarter-final against Real Madrid.

The striker suffered a knock in Saturday's 6-0 victory over Augsburg and faces a race against time to be on the pitch when the first whistle blows at the Allianz Arena on April 12.

That is why, according to Bild, he will sit out the upcoming league clashes with Hoffenheim and Borussia Dortmund, which should allow him to save himself for the date with Los Blancos.

It is a similar story with Manuel Neuer and Douglas Costa, both of whom have also been on Bayern's medical report in recent weeks, even if they too are hopeful of returning in time for the Champions League tie.

Simeone: Atletico Madrid are third unexpectedly, now we must back that up

One of the side effects of Sevilla's sharp downturn in form has been Atletico Madrid rising back into the top three of LaLiga, a position Diego Simeone accepts is a bit of a surprise.

Los Rojiblancos have forever been recovering from early season stutters, but when facing Real Sociedad on Tuesday, the coach is looking for his side to justify their position.

"We find ourselves unexpectedly in third place, level with Sevilla," Simeone stated to his press conference. "The fixture list looks tough and the only way we can back that up is by not looking beyond tomorrow [against Sociedad].

"They are a team that's done very well this season, beyond their usual self with a strong approach and constant development.

"I look at them as a rival for tomorrow's game and that's how we're most comfortable. They have reached a great level, especially away from home, so we'll need the Estadio Vicente Calderon to support the team and focus on catching those side's above us."

Whether Kevin Gameiro will be fit or not for the 21:30 CET kick-off remains to be seen, although Simeone noted that the forward is training with the first-team.

"Today I haven't spoken to the physios but yesterday he trained and we will see how he feels," added the Argentine.

"Not only with him, with any footballer I want to see their best version out on the pitch because we demand 100 percent and for that he has to be fit.

"I want them to always be in top shape, unless it's a final, in case someone wants to do a Costa."

The Atletico boss also failed to rule out suggestions that Koke and Stefan Savic will be rested for the midweek fixture given they are on the verge of suspension, and with the Madrid derby on Sunday April 8.

Sunderland manager David Moyes faces a possible FA sanction after telling a female reporter that she "might get a slap even though you're a woman" for questions asked in an interview last month.

Moyes, whose side are rooted to the bottom of the Premier League, apologised for the comment at a news conference on Monday.

Reporter Vicki Sparks, who works for the BBC, had made no complaint at the time and the broadcaster said the pair had spoken about the exchange and resolved the issue between themselves.

Footage of the conversation, filmed on a mobile phone, was published on Monday on the website of the tabloid Daily Star newspaper. Both parties appeared to be laughing during it.

Others took the matter much more seriously, however, with shadow (opposition) sports minister Rosena Allin-Khan calling for an FA investigation.

"If you look at the fact that he wouldn't have said that to a male reporter, and I truly believe that, I think the comments and his behaviour and attitude was sexist," she told BBC radio.

"With the FA, part of what they have been criticised for in the past is not tackling sexism and other forms of discrimination, which needs to be stamped out across the sport.

"Fundamentally it's a male-dominated environment that women find it incredibly difficult to break into and comments like this do nothing to encourage women," she added.

The Football Association, which earlier announced the unanimous approval by its council of reforms to increase the number of women on the board, said it was "seeking observations" from the north-eastern club.

The comments were made after Sparks asked Moyes whether having Sunderland owner Ellis Short in the stands during the 0-0 home draw against Burnley on March 18 had increased the pressure on him.

Moyes said on Monday: "It was in the heat of the moment, I deeply regret the comments I made. It's certainly not the person I am and I accept it was a mistake.
Email : [email protected]
Προηγούμενο : Neymar enters Barcelona's 100-goal club | Επόμενο : Simeone: I spoke to Theo 20 days ago and we know what was said
Προβολές : 383
- 2984 προηγούμενη ημέρα